Varying Boot Routes and Protections: An Alternative to RPO’s

Boots and pocket moving plays have always been a very important part of our offense at Catholic.  Each game, we try to have about 4 or 5 different boots in our game plan.  Initially, in Spring and Fall camp, we will teach the basic boots that surely all of you have run in the past.  These boots act as the starting point for the variety that we seek throughout the season.  Over the last 4 years, we have averaged calling about 4 to 5 boots per game.  We feel that boots accomplish a few things:

When we look at designing boots for a game plan, we generally are looking to get the ball into the flats relatively quickly and put defenders who have run/pass responsibilities in conflict.  We are not a heavy "post-snap" RPO team.  We love the "pre-snap" RPO game and will run some very simple post snap RPO reads.  We see the boot game as our way to conflict defenders with run and pass responsibilities and not ask too much of our quarterback in terms of quick decisions to hand off the ball or throw a pass.

Once we have figured out how we want to get the ball into the flats relatively quickly, we will then develop the rest of our triangle read.  Typically this involves a deeper comeback type of route from an outside receiver and a crossing route from the backside of the formation.

In years past, we tried to come up with a steadfast rule for boots.  If you were the #1 receiver to the boot you ran this route, #2 this route, etc.  However, in getting creative with our boot game, we realized that trying to fit boots into this type of system was extremely restricting.  Now, we simply call boots by a family of similar objects.  The basic idea for us in calling/naming boots is to not make it complicated.  Give the boot a name and call it a day.

Other areas we consider when planning to incorporate boots are tendencies by formation or personnel group.  We know that we create some heavy tendencies when it comes to certain personnel groups or formations.  As long as we know about these tendencies, then we can choose to break them when it benefits us.  We generally try to add boots into our game plan out of formations and personnel groups that scream run to the defense.

For the purposes of this report, I will assume that you already are running some of the staple boots in your offense.  Hopefully, the examples below will help you to add some variety into your boot game. 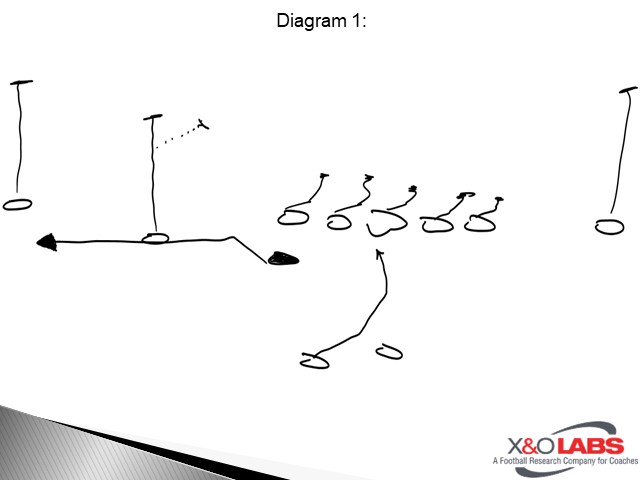 One of the popular ways for offenses to get the ball on the perimeter lately has been what we call “solid” plays.  These plays are when receivers are blocking downfield and the ball is thrown on the line of scrimmage to a player in flats.  You can see many offenses that utilize this in the zone read game.  These plays allow the offense to read and control the extra defender that can play in the box and still relate to perimeter passing game.  We teach these reads as pre-snap decisions to our quarterback.  Here is an example of a “solid” zone run from our offense.  Notice the extra defender outside the box that widens with the H when he runs the arrow route.  The quarterback hands the ball off and we have controlled the extra defender.

One variation to this type of boot that we have found very effective is a solid boot we run off of our buck sweep action (Diagram 2).  We tell our offensive linemen to block buck sweep but to not go downfield.  The receivers on the "solid" side of the boot will block the man on or over them.  We slide the H or fullback out into the flat and tell him not to cross the line of scrimmage until he catches the ball.  This allows our receivers to block downfield similar to a screen.  We like this version of the solid boot because it protects one of our best runs, buck sweep. 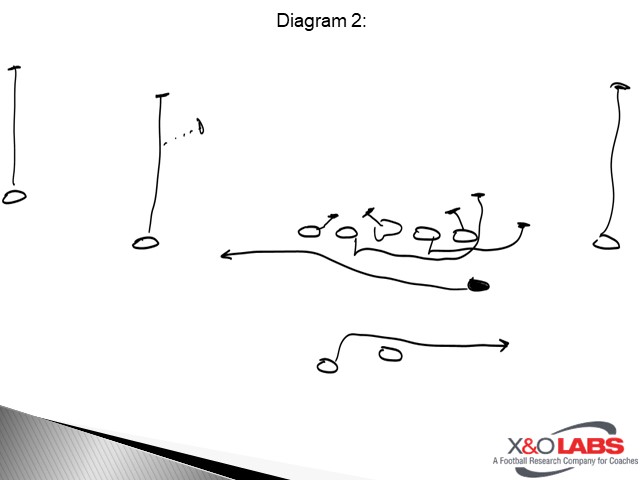 This first example is the most basic way that we run the play.  We pull both Guards toward the fake and slide the H underneath to a two-receiver surface.  Notice that the officials threw a flag on us for blocking downfield.  Remind officials in your pregame conference that you will be throwing these boots and catching them on the line of scrimmage.  They eventually picked up the flag.