Variations of the PAP Glance Concept

The glance concept is a staple in our passing attack at WPI. We use it out of our play action passing game and our drop back game. We believe that it gives us answers not matter what coverage we see while giving us a chance to get our single receiver isolated and give an easier throw for our QB. We use it with both 20 personnel 2x1 and 10 personnel 3x1 formations.

At WPI, we are a balanced offensive attack that attempts to establish the run first and build our passing attack off our primary run plays. The highest percentage of our passing game is made up of play-action, followed quickly by our quick game and drop back game.

A lot of teams are running this as an RPO and reading either the safety or LB to the side of the post depending on coverage. We choose not to do that as we don’t leave it up to chance, we want to put it more on us as coaches to dictate exactly what we are doing on each play.

The glance concept for us is a Bang 8 (8 yard post) by the single receiver, with our sniffer back running an arrow (3 yards on the sideline width before depth) to the frontside. On the backside, we will run a pivot concept with #1 on a 12 yard dig, #2 on a pivot, 6 yards reading the 1st defender inside of him. 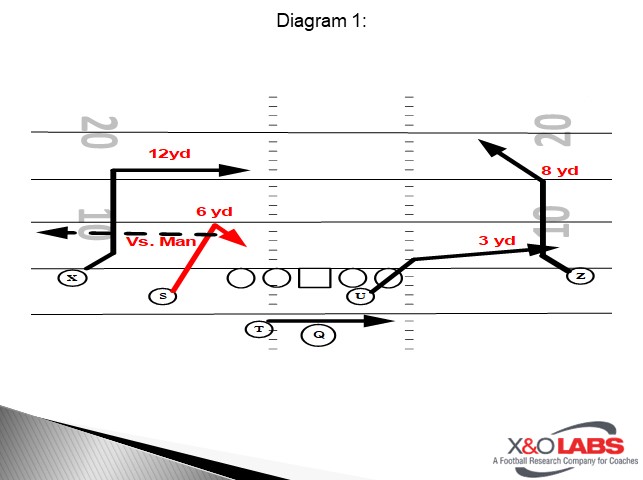 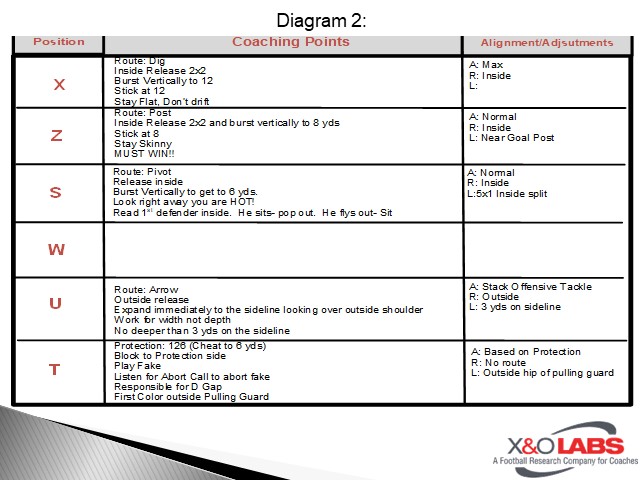 The rules we give for the QB are pretty simple. We really want to throw the post, that is our goal of the play and we want our QB to look there first. Against 1 high/Cover 4, it should be going to the Post anyways as the safety to that side would be either rolling away or coming down. This creates the void for our WR to win inside the CB. Against Cover 2, we used to teach him to work off the Hook/Curl defender and look Pivot to Dig. We no longer do this as we have struggled throwing digs to the field, especially to our left. We now teach him to look to throw the post and work from there.  We do have a “hot” built in for the QB. If he sees 2 rushers outside the tackle on the backside he will hit the pivot route. The WR running the pivot route will look right away if he sees any 2nd level defender blitz. The front side “hot” is technically the arrow route by our sniffer back. We don’t teach it as a hot as we feel we would be able to protect the front side with a pulling guard and TB.

At WPI, we are mainly a gap scheme rushing attack, with our most called run plays being Power and Buck Sweep. Our main play action pass protection is based off the counter scheme (power in our verbiage) with the backside guard pulling and being responsible for the C gap player and our Tailback getting the fake coming across the QB and filling outside the puller to account of D gap. With this look, we show “power” to the defense and get the conflict defenders to trigger on the run and allow us to get over the top with the single post.

The post route we run is breaking at 8 yards keeping a 45-degree angle aiming for the near goal post. We give a couple of rules for our WR running the glance route while also trying to give them freedom to be athletes. They are taught that they must win inside because we want this to work against any coverage scheme.