Every year, we look for ways to protect our base run game. This can be through the RPO game, screen game or play action game. Another way is to have complementary runs that look very similar to your base run game that is currently in your offense. This limits the teaching time that must occur when you are implementing a different run scheme. This year, the Iso play was a very effective complementary run scheme that protected our basic runs while being very flexible in the way that it could be applied.

Our main focus, when looking at the Iso play, is to get a body on a body. Against a 4-down front, we will work to get a double team on the nose. It is important to note that our line splits are between three to four feet wide. We are looking to create natural running lanes for the running back. 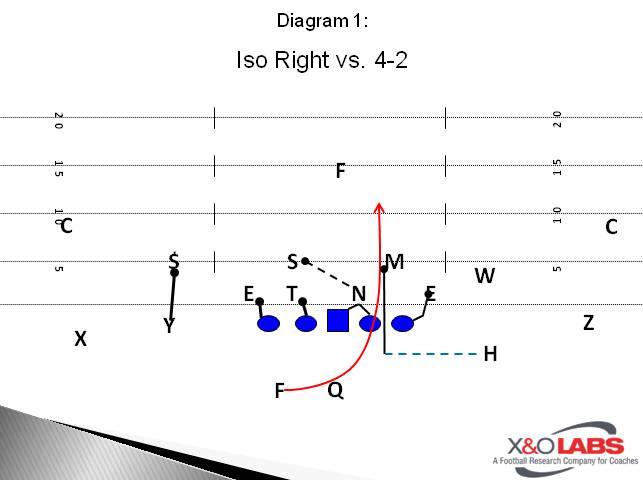 When running Iso to the 1-technique, the play side tackle (PST) is trying to get the defensive lineman to get up the field and outside. The tackles aiming point is the inside number of the DL. You can also have the tackle pass set on the DE to get them flying up field (that comes from watching film and getting a read on the defense).

The back side guard and tackle are trying to get the 3-technique and defensive end up the field and outside. They have the same aiming point as the PST (inside number of the DL). 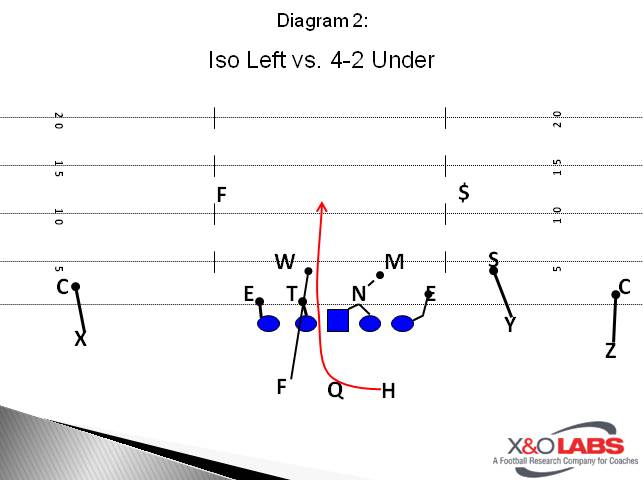 The only difference running to a 3-tech is that instead of the double team from the PSG and C, the double team is from the BSG and C. The rest of the base are base blocking the defensive ends and the DT. They are trying to attack the inside number of the DL forcing him to come up the field outside.