This past year our offensive staff installed what we call the Frisco concept. Our passing game is based on the system developed by Dan Gonzalez and this concept is similar to the one he utilizes in his offense. We use a combination of a number tree and words for our routes and Frisco is an acronym that identifies the routes for our kids. From the outside to inside it stands for five, slant, one. The diagram below shows the basic routes for Frisco from a Trips set. 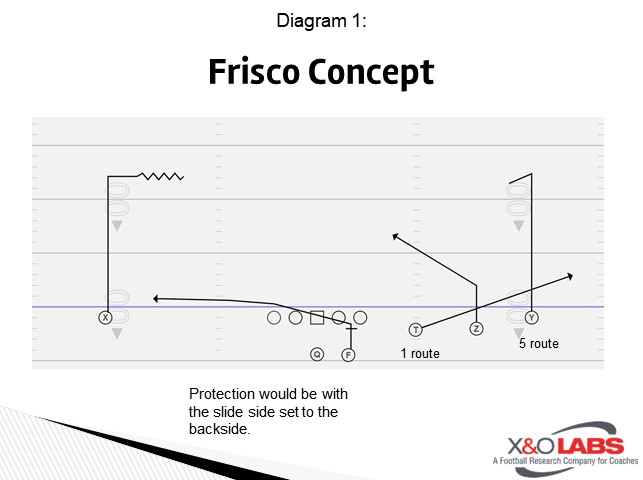 We also ran this from two back with either the F or T running the one (arrow) route from the backfield. 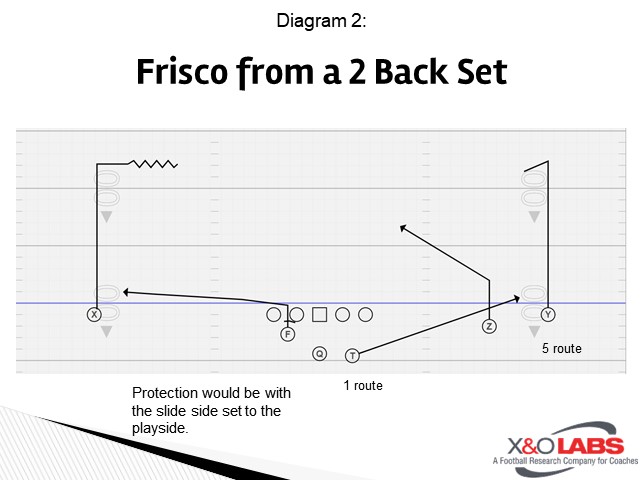 Throughout the year this route proved to be a versatile concept that we used in any down and distance situation and anywhere on the field. This concept provides the quarterback with a quick throw to the slant versus blitz and a high-lo read on both the front side and backside of the play to take advantage of a defense that overplays the slant.

We use a standard 6 man half-slide protection with this concept. The frontside blocks big on big and the slide starts with the first uncovered lineman. The back will insert himself on the playside and look to block the first threat from inside to outside. If no threat shows, then he releases and drags to the backside getting no deeper than 3 yards. We will call protection variations that place the slide side on the frontside of the play. This gives us an answer for teams that like to blitz from the field side and helps to avoid creating tendencies that are too obvious by moving the placement of the back in the backfield. Clip #1 shows our standard protection versus a 4 man front, while Clip #2 shows the same protection, but with the slide side on the frontside of the play.

We take 95% of our snaps from shotgun so the majority of our QB’s drops will be 3 step drops. We also use Gonzalez’s idea of ACTS (Advantage, Concept, Third Fix, Scramble) to teach our quarterbacks their progression. In this concept, his advantage route is the slant. By the time his back foot hits on his third step he will know whether he is going to throw the slant or not. Even in a situation where the defense brings more than we can block, the quarterback can still stand in and deliver the ball to the slant before the blitz can get home. He’ll take a shot, but we have the opportunity for a big play as well. A key coaching point on the slant is that the quarterback has to throw this where the receiver won’t take a huge shot from a safety. We want the slant run aggressively and if the receiver is worried about taking a hit that doesn’t happen.

If the slant is covered, then the quarterback will hitch up after his third step and look to his concept, which is a hi-lo read on the alley defender to the slant side. This defender can not cover both the 1 route in front of him and the deeper 5 route behind him. Against man coverage, the QB will still progress from high to low and takes the best throw.

If both of those options are covered, the QB will hitch up again and look to his third fix which is the backside in and the check release from the running back. The combination of those two routes creates a hi-lo on the backside defender. Once the QB has gone through the progression and nothing is there, his last option is to scramble and make a play with his feet.