Football is an ever-evolving game, however, the one constant that has remained is the fact that you need to be able to run the ball to win games. At Trinity College, the Middle Zone is the staple of the run game.  In 2018, Trinity ran it over 15x per game, for an average of 5.6 yards per carry and 9 touchdowns. One of the reasons they like the mid-zone so much is the flexibility it provides against different defensive fronts, schemes, and structures. Offensive coordinator, and offensive line coach, Mark Melnitsky says the reason they run it so much is that "We like it against, 4-3, 4-2-5, 3-man fronts, cover 2/4 structures, one high, man, for us it doesn’t matter the defense because we will be able to run mid-zone against any defensive look. It can also be run from under center or shotgun and offset or pistol when we do go shotgun. We can also tag our midzone to get many RPOs, play-action and bootleg pass to make the play that much harder to defend.” 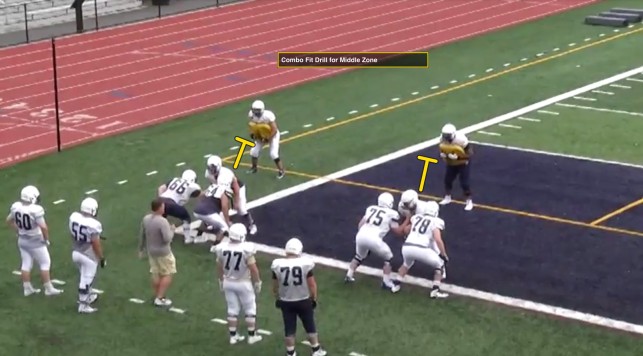 Why Run the Mid Zone?

What is Mid Zone?

Football is a game where coaches often borrow ideas from one another and blend ideas into one concept. The Trinity Mid-Zone is one such Concept. Coach Melnitsky describes their midzone as a combination of the inside zone scheme and the outside zone, hence the midzone name. Coach explains his midzone by saying: “on the inside zone, the landmark is the inside foot of the play side guard and, when we used to run outside zone, the ball carrier's landmark was 1 yard outside the TE or imaginary TE if run to a non-TE surface. The read on Inside Zone was the 1st play side interior DL to the 1st backside interior DL. The RB would sink the ball to his landmark and either drive it frontside downhill or hit the cutback in front of or behind the backside DL. In Mid-zone, we want the ball carrier to chase and press his play side landmark (outside heel of OT) and either bounce or crease the ball based upon how the tackle handles the DE. If the tackle reaches the DE, the ball carrier bounces the ball outside. If the tackle stretches the DE, the ball carrier must stick his outside foot in the ground and crease under the DE. We’ve essentially moved the landmark a player wider on MZ than IZ.”

To truly understand any running play, it all starts with the offensive line and their identification of the front and the blocking techniques that they are going to use to block the myriad of fronts they will see. The first thing that the Trinity OL will do is identify the front as either odd or even according to their rules. Next, they determine who the Mike backer is and that will determine the combination blocks or man blocks being made on the MZ play. On any even front, the front-side tackle is by himself on the end man on the line of scrimmage. The play-side guard and center are working together for the Mike backer and first down lineman past the center. The backside guard and tackle are working for the first adjacent backer away from the Mike and the next interior down lineman.

On odd fronts, the scheme is a little different, but Coach Melnitsky has simple rules to help his players know their assignments. For odd fronts, the blocking scheme is determined by if the play is being run into the boundary or the field. “We will run this from 3x1 with the solo side being into the boundary,” explained Melnitsky. “Into the boundary, if there is an overhang there, which most teams have, we will make the boundary inside backer or the playside backer the Mike. This pulls the front side guard into the scheme. The Backside Guard and center will work from the nose to that Mike and then the frontside tackle and frontside guard work from the playside down lineman to the overhang.

“If you run this to the field or the strength, we will make the backside backer the Mike. Here versus an odd front, the backside guard is working with the center to the Mike.  We can do this because we have no overhang defender. He is being blocked by the TE or is responsible for a receiver in the trips and can be taken up by the route.”

The diagrams below detail how Trinity runs its Middle Zone concept against various fronts: 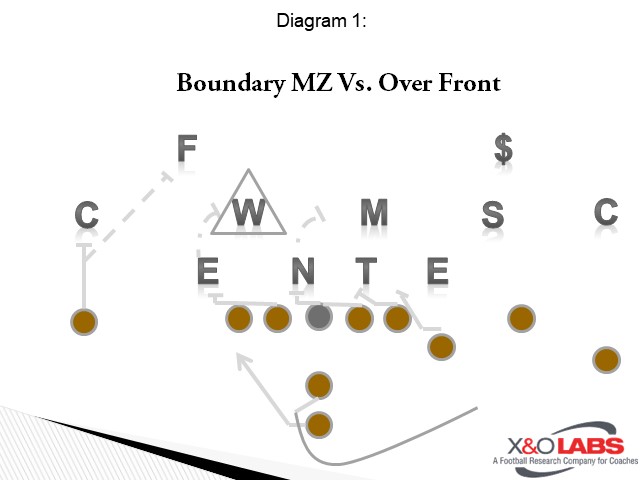 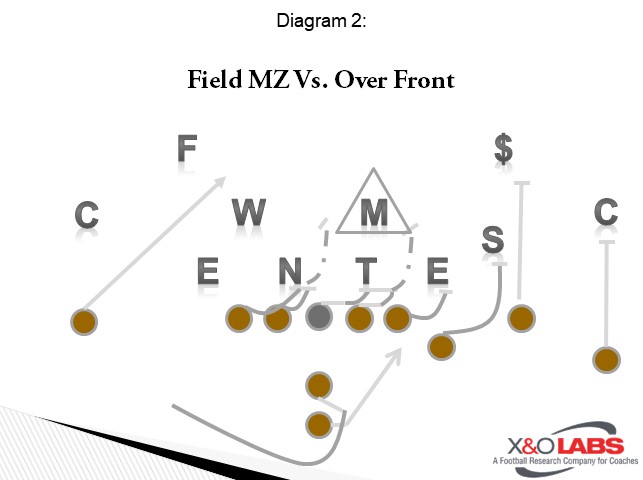 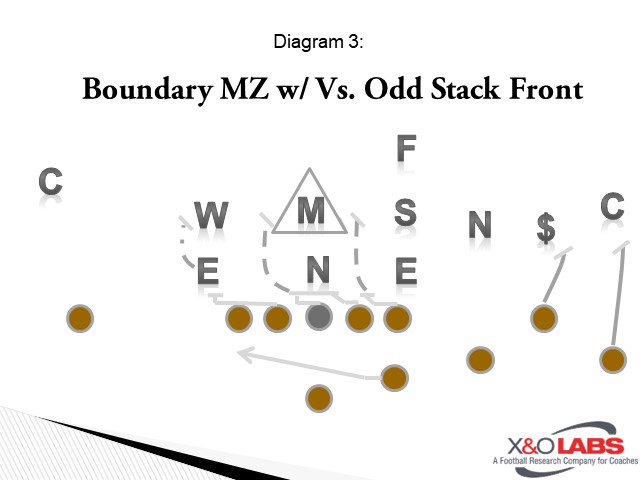 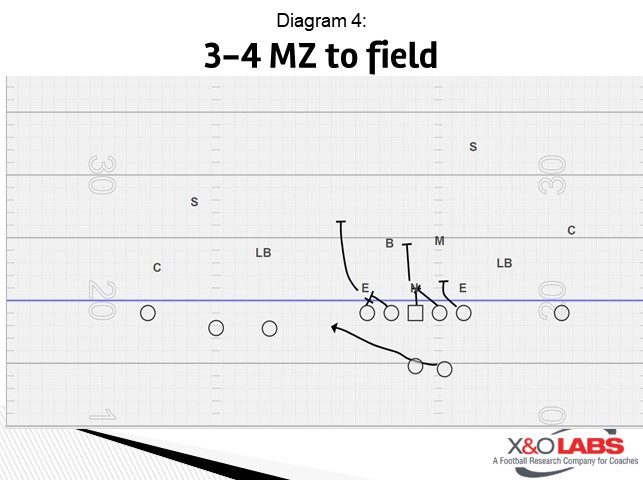