To compete in the Missouri Valley Conference in the late fall you must be able to run the ball and run it with physicality.  South Dakota State University believes in this philosophy wholeheartedly and they major in both inside and mid-zone concepts. Offensive coordinator/offensive line coach Jason Eck has been utilizing the concept of split-zone runs in the SDSU run game.  Coach Eck is using the split concept (he calls this Swipe) with his Mid-Zone and not just with the Inside Zone action that many teams are running throughout the country at every level.  Mid Zone is similar to the outside zone scheme, but with tighter aiming points. Coach Eck explains the term Mid-Zone as an alternative to Outside Zone as a way to remind the back that he is not just trying to get to the sideline but is trying to give the illusion of a wide play and then cut it back to the inside.  The “split” part of the concept comes from when a player will line up to the call but come across the formation and block the C gap defender, who is usually being unblocked or read in zone runs.

Mid-Zone is a staple run play for many teams across the country and at various levels of football.  The play starts with offensive linemen working in combination trying to take over down lineman by reaching them or stretching them horizontally to the sideline.  The ball carrier will read these blocks and either run it to the sideline or see the defensive lineman being washed down the line and cut it up the field getting vertically right now.  Part of why the mid-zone is so popular is how many different formations and personnel grouping the play can be successfully run from.   Offenses can read the backside end and have all the secondary manipulations that go along with reading the run game. Offenses can also go heavy personnel and overwhelm defenses at the point of attack with the mid-zone.

Coach Eck and the staff at South Dakota State found that meshing its mid-zone concept with the swipe principle provided solutions to the following four problems:

Answer to “Back Gapping” LB’s:

Defenses are taught to “back gap” spilt zone schemes. This means that second level defenders play behind blocks to account for the extra gap created by the H or fullback coming across the formation. While this may work against the tight zone aiming point of the inside zone (inside leg of the play side Guard) that most programs run swipe action with, the mid-zone hits wider. This can promote the potential of the ball staying front side. Coach Eck likes this split action on the Mid-Zone because of the misdirection it provides while running a play that attacks wider than Inside Zone.  Coach Eck also says the moment of hesitation it creates in 2nd and 3rd-level players can be very advantageous to the running back in the Mid-Zone allowing for potential big plays.  Second level linebackers who habitually are taught to “rock back” vs. divide zone action, cannot for fear of the ball hitting front side.

Remember that Coach Eck is calling this Split-Action, Swipe.  The Swipe Action is great against man to man defenses because that play side Backer has his eyes on the H-Back who is going across the formation away from the play. That action causes the Backer to hesitate for a split second.   Man teams are accounting for that Swipe player going to the flat and must insert a defender that way.    This simple swipe action often leads to mis-fitting by the defense.  Coach Eck feels its easier for one of the defenders to be wrong than all the guys on offense to execute correctly every play. 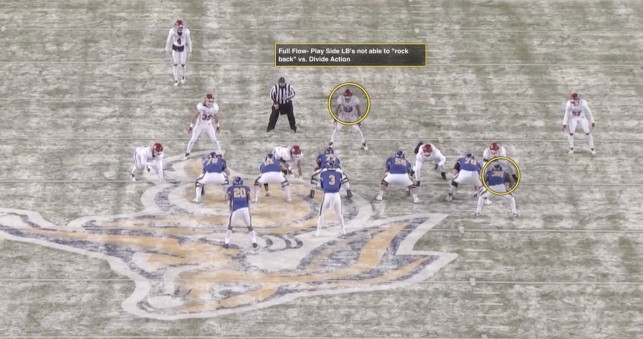