Editor’s Note:  2014 marks Matt Gardner's seventh season as an assistant coach for the Sacred Heart University Pioneers. Gardner will work with the quarterbacks again this fall.  Under Coach Gardner, first-year QB R.J Noel had one of the best single seasons in Sacred Heart history in 2014. The redshirt freshman tossed for 2,203 yards and rushed for 689 more, while accounting for 31 total touchdowns. Noel was named Northeast Conference Rookie of the Week seven times on his way to NEC Rookie of the Year honors. Noel tossed only 9 interceptions and his 23:9 touchdown to interception ratio was tops in the Conference.  Upon his arrival at SHU, Gardner worked on the defensive side of the ball coaching the outside linebackers before moving to the offensive coaching the wide receivers. He came to Sacred Heart after four coaching seasons with the Colorado Crush of the Arena Football League where he coached the wide receivers, linebackers and oversaw all aspects of special teams. Gardner earned his Master's Degree from Sacred Heart University in May, 2011 and he and his wife currently reside in Norwalk, CT. 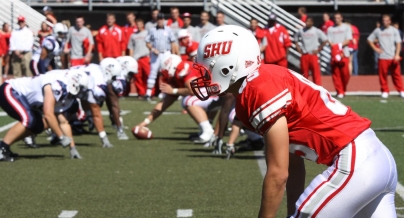 The following quick game pass concepts have developed into an extension of our run game.  We tell our players that we are looking to get 4 yards on a run and our quick throws are designed to get us at least 4 yards.  We like the quick game concepts listed below because it allows our offensive linemen to continue to be aggressive at the point of attack with a quick setting protection.  In our system, that type of protection is called “Cut protection” and involves the offensive line taking short set and then block the defenders by taking out their legs or (cutting them down).  Their goal is to put their helmet on the opponents outside leg just above the knee.)  Quick game also allows to be more balanced on 1st and 2nd down and it is an efficient way to get the ball to our playmakers.

Coverage ID:  To ID the coverage we will start with the alignment of the safeties, how many are there (1 high vs 2 high) where are the aligned (inside the hash/on the hash/outside the hash).  Then we will look at the alignments of the corners, do they appear to be playing a soft alignment (Cov. 3 or Cov. 4) or a tighter alignment square hipsC. 2 or man coverage).  Choose the side you are going to work by identifying the coverage and working the correct side.  If it is man the thought process should be softest corner shortest throw If you see pressure replace it with the throw.

For example, if there is a single high safety, that alerts the QB to the coverage possibilities.  Of course this is likely Cover. 3 or Cover. 1 and against this opponent, that is what the scouting report told us to expect.  There is a chance that they would roll to cover 2 or Cover 4 by having the SS safety that is lined up to the field over our #2 receiver run back and get on the field hash at 12 yards and if that were something we were expecting we would build that into the scouting report.  After he has looked at the safeties he will check the Corners.  The corners here are sitting at a depth of 8 to 9 yards with inside leverage so they are probably not playing man coverage.  We also teach that QB to  read the safety alignment to confirm if it is cover 3.  If the SS is at a depth of 6 yards from the ball 2 to 3 yards inside our #2 receiver our QB’s will assume C3.  It is generally hard to play man coverage from this alignment.