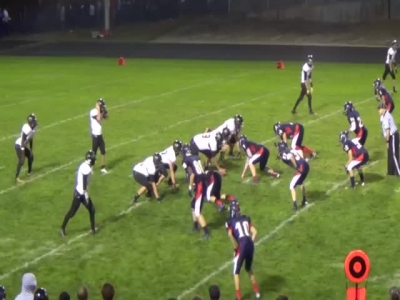 Like many programs, one of our off-season tasks as offensive coaches is to conduct a thorough efficiency analysis of every scheme we run. Our definition of efficiency is not revolutionary, but here is our definition:

Following the 2014 Season, we realized that one of the plays we installed late in the year, the Buck Sweep, was by far our most efficient play at 86% (albeit a small sample size). Since anything over 50% is good and anything under 40% poor, we were ecstatic to see the numbers on the Buck Concept.

Entering the 2015 Season, we made the Buck Sweep one of our staple plays. Thanks in part to some ideas we picked up from xandolabs.com, we added a Run Pass Option (RPO) component to the play and this is an idea we will definitely be expanding upon in 2016. The case for running RPOs off the Buck Sweep include:

One note on the following schemes and concepts: Last year we were inexperienced at QB, so we made the run/pass decision from the sideline, but we may look to put that on the QB in the future.

Some of the position labeling in the following diagrams may be confusing. We don’t use traditional X and Z designations. Instead, we have Field (F) and Boundary (B) receivers. We also use what we call Big Field (BF) and Big Boundary (BB) receivers in our compressed formations. These are hybrid players and could be bigger receiver types or extra TEs. It’s a great place to put basketball players who might not be burners, but aren’t afraid to mix it up a little. Our H receiver is a traditional slot type who is our primary fly sweep runner.