Scaffolding the Truck Concept and its Variations 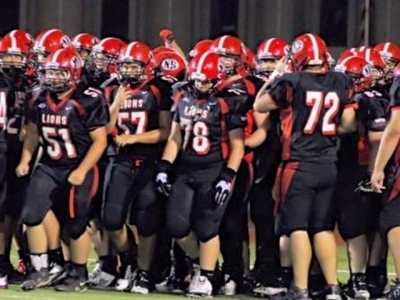 Many coaches get caught up in running plays and not necessarily having a system. While this approach can work, I feel that the disjointed nature of those offenses keeps the players from maximizing the ability of each individual concept. As an answer to this type of approach, we have put together a unique way by scaffolding each run play.

Scaffolding is a common term in the classroom, but we have found that it is also very effective on the field. Within our offense, scaffolding means that we must have answers within the same play for ways the defense may react to that particular play. This, in turn, forced us to create our passing game from the perspective of finding ways to protect our runs.

The result is an offense that is simpler and harder for a defense to read. Much of what we do on offense will look similar to the defense causing them to be slower to react. We only have 4 base runs and our system is built around that. This style of building our system also helps us play as fast as we can; both our players and our play calling is aided by this type of scaffolding.

Building Our Base Offense

Before we came to New Richmond, they had been an under center, triple option team that huddled for almost 40 years. The system that Coach Osborne and myself brought to New Richmond was a drastic change from what the players and fans were used to seeing.

From the start, we vowed not to install a run play unless we could protect it in a number of ways. If an assistant comes to me with an idea, my first question is, “Can we protect it?”

We want to get the best looks from the defense in order to put our players in the best situation to be successful. Instead of installing a “new play” to have an answ'er for what the defense may do to a certain concept, we want answers that are built-in within that concept. In this article, we will examine our “Truck” concept (pin and pull) and the built-in answers that we use to adapt it to various situations.

Truck is our off tackle run. We like Truck because we feel it’s a downhill physical run and that is a reflection of our offensive identity. We set the aiming point for RB as the inside leg of the Y. As he runs that path, he is taught to read the blocks and either bang or bounce the run. This play cannot be cut back because there is no help backside with the guard pulling and tackle climbing to next level. 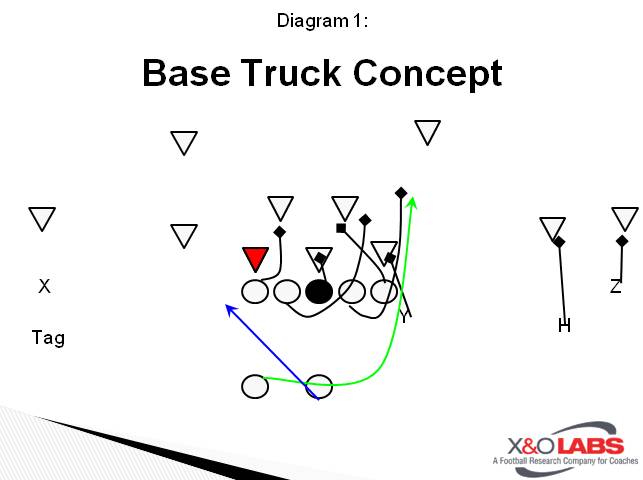 Quarterback - Make pre-snap read and determine if the BS throw is open for the WR. If it is there, he must communicate this with the back. If throw is not there, the QB will take the snap and get his eyes to the read. If the read sits, he will hand it off. If the read chases, he will pull the ball and go out the back door.

Running Back - Alignment for the RB is level with the QB and aligned between the guard and tackle, but can be adjusted based on speed of your back. On the snap, the back will open to the direction of the play and run flat in front of the QB. He will get his eyes to his aiming point as he is securing the handoff from the QB. If the ball is pulled, the back will roll over top and continue through the run. As he runs, he should find the BSG and follow him. He will look to put his foot in the ground and get vertical as soon as possible.