Every play action concept is understood to take advantage of the defense, focusing on the run action; being able to attack voids left by those displaced defenders.  For us at Worcester Polytechnic Institute (WPI) we run a majority of Power Read and Buck Sweep (same backfield action, different blocking scheme).  WPI installed a play action pass that essentially becomes a flood concept with an inside stem vertical; a wheel and a trail wheel to attack the support players in each defense that we see.  This is not a common action, resulting in naming this “Power Read Pass” to simplify for our student-athletes, instead of naming each route individually.

The passing concept is similar to a flood type concept.  Instead of the routes breaking out, they will all continue vertical.  Although you may not think of it as a “flood”, plotting the points, where the routes end for a flood concept would result in the same end points in this concept. 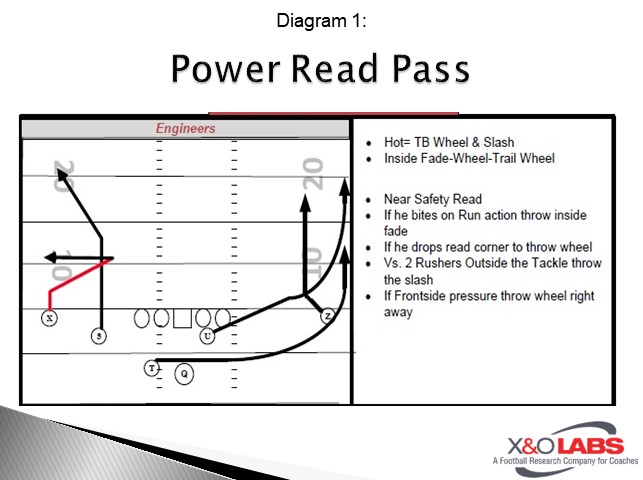 At WPI, we have changed the reading pattern, making it as simple as possible for our quarter back.  His progression is to read top down, but at WPI we instruct to read defenders.  For this concept, we begin with the Corner, (Safety should not matter with how tight we run the #1 WR route) moving to the Overhand/flat player to the hook/curl player.  Our focus is to hit the tight seam route on a line first, and then the wheel, with the trail wheel being a check down.

At WPI, we are mainly a gap scheme rushing attack, with our most called run plays being Power (Power Read)/Counter and Buck Sweep.  Our main play action pass protection is based off the power (counter) scheme; the backside guard pulling and being responsible for the front side C gap player. Our Tailback receives the fake running in front of the QB and continuing outside the puller to account for the play side D gap.  This specific play, we free release the TB and leave the D Gap player for the QB to take care of with a hot throw.  With this look, we show “power” to the defense and get the conflict defenders to trigger on the run action.  The inside stem by the WR gives the illusion of a crack block they have when we run Buck Sweep, forcing the secondary to execute their crack replace rules.

An adjustment we make and utilize the most with this concept, is to put our sniffer back on the backside of the protection.  We insert him in the backside B gap and let the tackle fan for C gap.   This now makes it so that we would not have to throw “Hot” off three rushers weak.

We give the #1 WR very specific rules when running his route.  There was never a given name for the route, as it mimics a seam route run from the outside.  The WR is told to align on the bottom of the numbers (normal alignment for WPI) where he should take two inside stem steps, (get to the top of the numbers), concluding with taking three vertical steps before he looks for the ball.  The vertical steps are necessary due to the following reasons:  Everyone loves to drift and we do not want the safety to be able to have involvement on this route, where his skinny stem should keep him away from the safety when we would be throwing him the ball.  The inside stem sells a crack block forcing the secondary to utilize their crack force rules, resulting in the action we are trying to create.  Thirdly, we inform him to be inside the corner, as his vision to be to want to protect the throw if the QB decides to throw him the ball against a bail corner.

Wheel routes are run differently within our offense depending on the alignment of the back.  If he is in any position near the line of scrimmage, we teach the wheel as an arrow initially, with the RB getting width over depth and turning up once he hits the bottom of the numbers.  When he is aligned in the backfield, we tell him to go right now, aiming for the bottom of the numbers.  Once on the vertical part of the route, fade rules apply, no further towards the sideline than ½ way between the numbers and the sideline, to give the QB room to throw away from defenders.