We will detail our 5-yard option routes and concepts from the wide receiver position in this report.  The option routes give us a chance to get the ball out quickly and allow our wide receivers to get open against different coverage looks. We will talk about some of the details we teach in reading the coverage and how to run the route to maximize yards after catch.

We had success running the option routes out of a stack (2 WR) and bunch (3 WR) alignments. We will discuss the concepts and adjustments against zone and man coverage. The first thing we ask the receivers to identify pre-snap is man or zone coverage. Determining man or zone gives them a good idea of how they will best run their routes.

In a stack or bunch set, they think man coverage if there is press coverage on one of the receivers. Another thing to look for to determine coverage is number of defenders – if it’s three defenders defending a 3 WR bunch look, then it’s most likely man coverage. If it’s two defenders versus the 2 WR stack, then it’s some sort of man. If the defense plays four-on-three against a bunch or three-on-two versus a stack, then we assume zone. 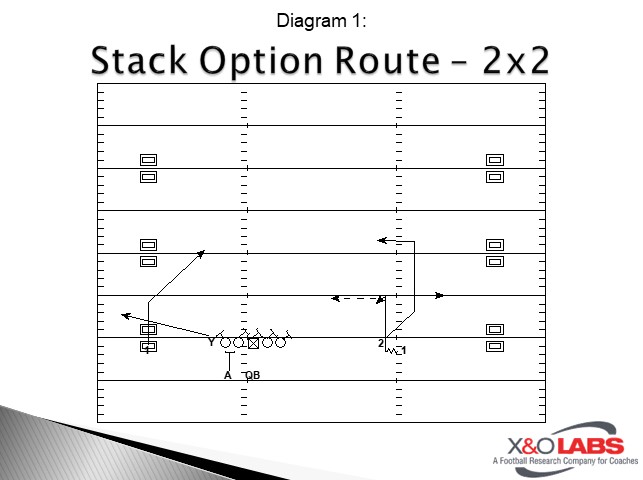 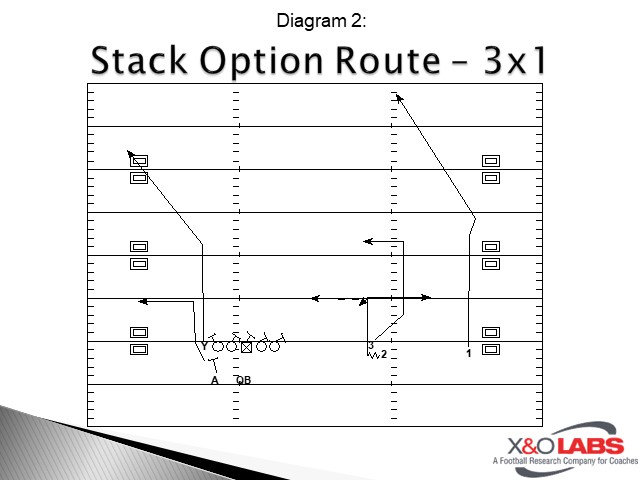 This concept we run from 2x2 or 3x1 formations. Our inside wide receiver in the stack runs widen departure Dig route at roughly 12 yards. He needs to stay flat at the top of the route. We widen departure for three to four steps based on our tighter alignment. If the concept is coming from the field side, we prefer the Dig to be caught around the hash.