Lateral space is the name of the game these days and we here at Hendrix have made it a huge focus as we have built this program to a playoff contender. Our RB stretch and the RB swing pass with a read-option while blocking power and GT counter have been staples of our horizontal attack. Here are some advantages of pairing the RB Stretch/Swing Pass with either Power/GT Counter run-action:

Offensive Line – The first thing you must do as a coach when running these plays is identify what you can block up front most effectively. Our players at Hendrix are proficient with down-block schemes, so we tend to use more Power/Counter with the lateral backfield action more so than inside zone. The overall concept of the play creates false reads and misdirection for LB’s, as well as favorable angles for our offensive line to execute their blocks.

Running Back – Secondly, we get our fastest guy at RB. He either runs stretch or swing based on which side of the QB he is lined up. The RB does not concern himself with what run play has been called. Just go lateral!

Quarterback – Third, we teach the QB to identify his read key and make that player wrong. The QB only has to know what run play is called insomuch as when he does keep the ball, he knows what aiming point he is looking for (in many cases simply find the puller).

Receivers / Tight End – Fourth, we teach our WR’s and TE to ID the most dangerous players in the perimeter space and block them. WR’s and TE are not concerned with what run play is called. Simply get on your block and stay on your block.

The QB will always read the end man on the line of scrimmage. In this case, versus an even front, the QB reads the DE. If the DE cannot make the play on the RB, the QB swings it out. If the DE goes lateral right now to take the back, the QB keeps it on the power. The receivers identify the most dangerous threat and block leverage. The TE arc releases and works to circle the scraping play-side LB. 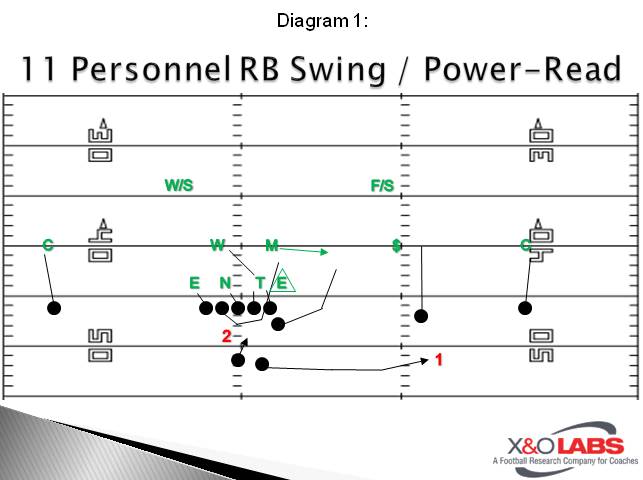 Here it is from 10 personnel. In this case the #3 receiver must determine if the scraping LB or the play-side safety is the most dangerous threat. Typically, the LB is in better position to pursue the swing. Therefore the #3 slot usually ends up with this man in his lap. 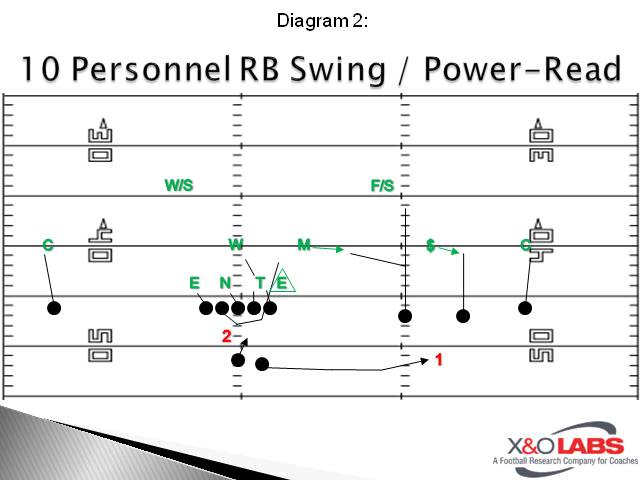 If we see blitz from an edge player, such as the nickel, the QB must treat him as the end man on the line of scrimmage and read him. If the nickel can reach the RB, then the QB keeps on the run play the same as he would normally, and now the play-side offensive tackle must account for the DE as the new B-Gap player. Sometimes we will see teams line up in a “Bear” front (50 front). The QB simply sticks to his plan of finding the end man on the line of scrimmage and reads him. The offensive line simply makes a “Down! Down!” call and all front-side linemen block down to their inside gap. 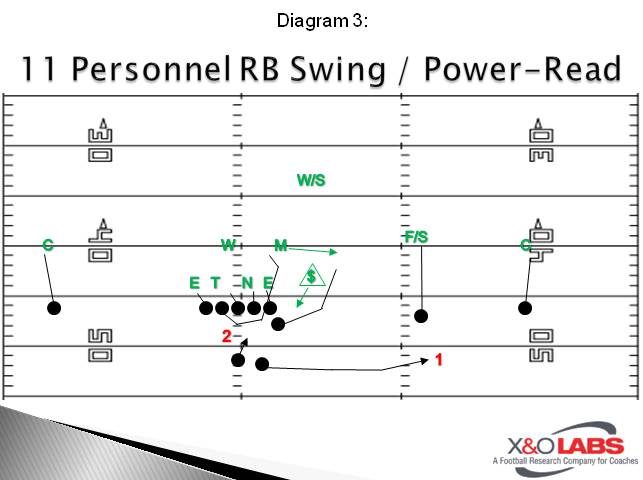 To study game cutups on this concept, click on the video below: