Half Boot; Half Quick Game: The Quick Boot Concept

Alcorn State offensive coordinator Elliott Wratten would like to tell you that he took the concept from listening to a couple of Big 10 coaches' clinic a high school staffer during a recruiting trip last spring. But in reality, this concoction was brewing for quite some time in his mind. The synthesis commenced when his starting quarterback entering the 2021 season was a shade under six feet. Clearly, he was going to have trouble delivering balls in the pocket. But he could evade pressure and extend plays. In previous years, Coach Wratten leaned on the sprint pass game to get smaller QBs on the perimeter. But the sprint out game had some significant deficiencies: the field gets cut in half, all of the action points to one direction giving the defense has a better opportunity at recognizing and reacting. Plus, secondary contain would be a problem with a smaller quarterback. "I didn't want to worry about having the Mike linebacker pull up and knock our guy out," he told me.

The boot game became another option. But, those concepts still emphasize only half the field and if the over route is not there immediately it can become a dead play. So, Coach Wratten needed to find a way to mesh full-field reads with a varying launch point. And it was after studying some Penn State and Arkansas film that he bought in full sail to what he calls his "Quick Boot" concept, which combines quick game elements to the boundary with a half roll element to the field. Alcorn State already built a free access package to the boundary and his quarterback was efficient in throwing on the run, so the merger was not only sensible but also inexpensive. It was so inexpensive that Coach Wratten installed it two weeks before pre-season camp. It became an easy drive starter and completion play for the quarterback. This season the Braves ran it 33 times and completed on more than 70% of balls. It quickly became the quarterback's favorite concept and a reprieve after an incompletion. "Now we can get receivers able to work downfield routes and we can pull up later than in sprint out schemes. "You don't have to pull up right away and make a quicker decision."

The structure of the concept is split between a boundary access route and field-side conversions. The offensive line is in a six-man protection scheme with the tight end, while the running back is in a check-release scenario as a late outlet for the quarterback. 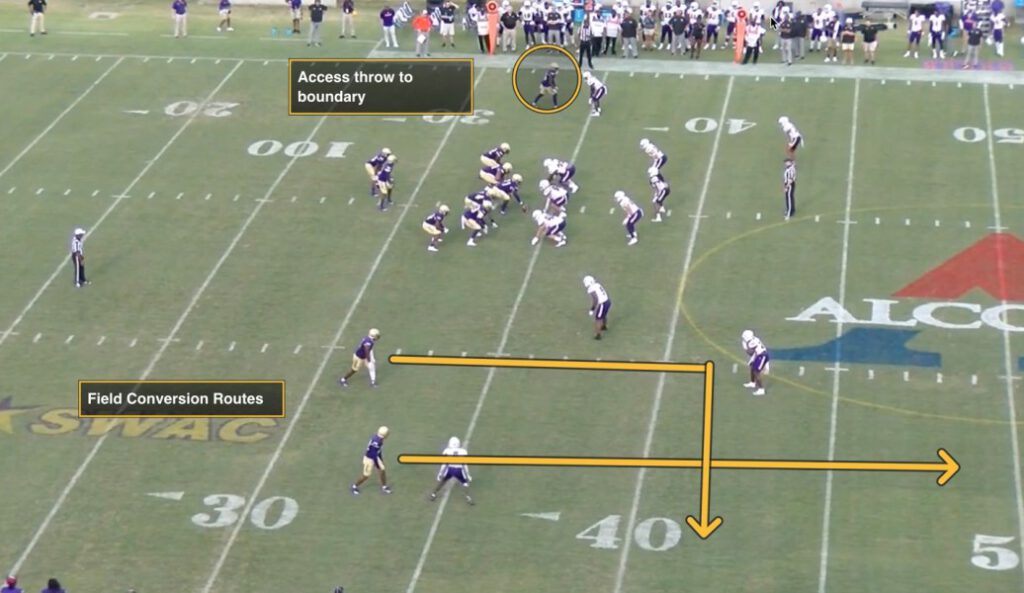 Like most programs, the free access element is built-in based on the depth and leverage of the boundary corner. Free Access throws are a major part of the Braves' offensive system. And in the RPO world, many times the receivers, not the quarterback or Coach Wratten, communicates the intentional route at the line of scrimmage by reading coverage. This isn't the case in these concepts according to Coach Wratten. These boundary routes are built into the play call. Earlier in the season, stops were used to take advantage of leverage. It was a solid answer vs. "cat" pressure from the boundary. "We would continually take a favorable one-on-one matchup with a receiver and that safety on those pressures," he said. "But in doing so, that receiver needed to expand to the tics to widen the safety." 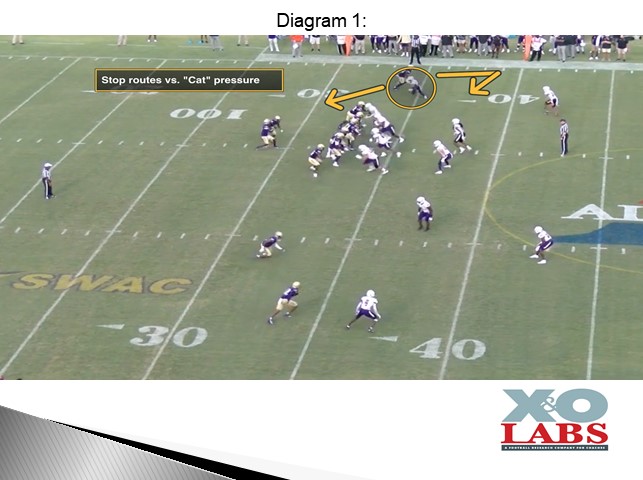 But as the year progressed, those access throws were now transitioned into field side throws like slants to take advantage of leverage and space. They were designed against press coverage to hit a moving target on the run. 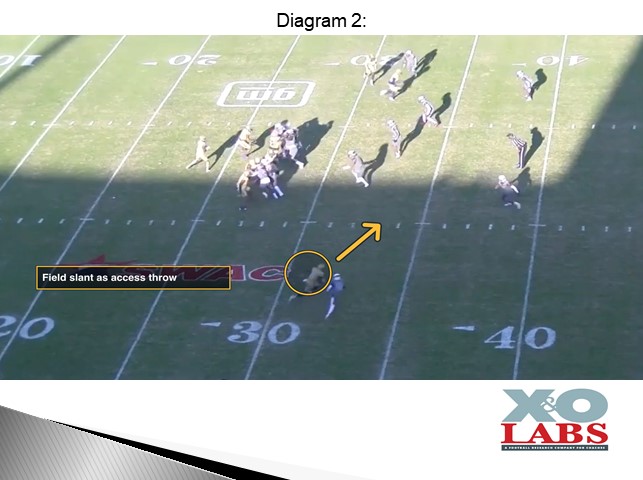 All of these concepts are utilized from gun alignments. The quarterback will execute a drop step with one, two footwork to check the free access throw. If the access throw is there, he bangs it. If it is not there by the second step, he bows back, loses ground, and boots away from the line of scrimmage to work the field side routes.