Prior to the 2017 season, as a staff, we wanted to look at the personnel on the offense and also decide what we needed to do or be able to run effectively to have more success. As with most teams we wanted to run the ball more and based on the players we had coming back we decided we needed more of a down-hill run game. We felt that adding in Iso would allow us to run between the tackles more effectively and maximize the potential of the players we had. Once we established how we wanted to run Iso we knew we would need a counter play off of it and a chance to get the defense to second guess the flow of the backfield. One of the most important factors of these plays was the blocking rule we gave to the offensive line. For game one, the team did not play the front we expected. However, we simply told the players to follow their blocking rules and everything worked just fine.

We run a no-huddle system on offense so having Iso allows you to not only wear down the defense with tempo but also wear them down physically by running down-hill. Iso gives you the opportunity to have a short yardage play that can break open. For the opposing defense, it forces their linebackers to come up against the run and play physically with the lead back and puts the safety in a one-on-one situation for an open field tackle.

There are two formations that we mostly use when running Iso and QB Counter which is a version of our “up-back” set (Diagram 1) and what we call “Trey” (Diagram 2). Trey gives us more of a spread look without making the lead back cover too much ground to get the iso block and the up-back set still gives the defense 3 wide outs to contend with. 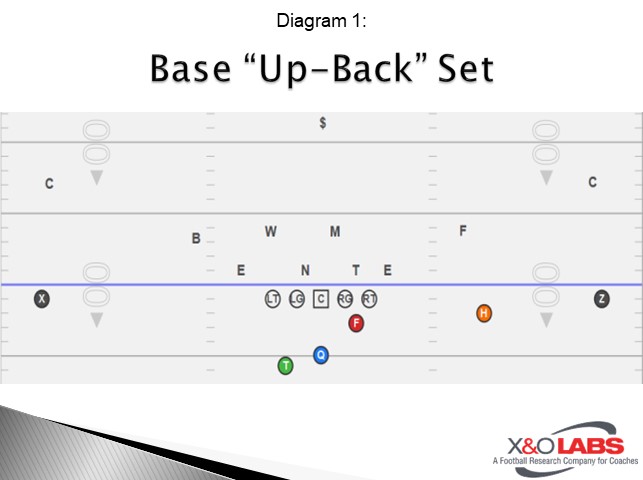 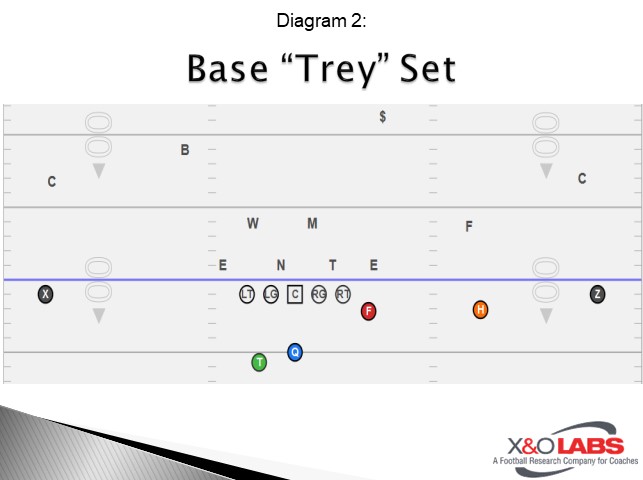 Blocking Rules and Procedures for Iso:

On the perimeter, the Wide Receivers (X and Z) have a simple stalk blocking rule of taking the man that is "head up to inside". This rule also applies to the slot receiver (H) or we may tell them to take the near threat to the ball. For example, they may have a Safety lined up over top and an Outside Linebacker splitting the difference between the near OT and their alignment. In this case, the H would take the OLB since he is more of a threat to the ball carrier.

In the play call, we do not designate a ball carrier number and hole number to run to. We simply call the play as either "T Iso Right" or "T Iso Left". Once the Offensive Line, Up-Back, and Tailback know where Iso is going, they next have to identify where the "bubble" in the defensive line is. We identify the bubble as the gap on the declared side for the run where there is not a down lineman. The lead back with taking the "bubble" and all Offensive Linemen will block away from the "bubble". This is very simple for the OL, as they just need to determine if they are to the left or right of the bubble and then block “Down and Away” from the gap/bubble.

Playside Tackle/Right Tackle on Iso Right – If the play side tackle has a shade technique on his outside shoulder (5-technique), he will simply block out or "away" from the bubble. However, if the play side tackle has a 4 technique head up, he will step inside on the snap to get inside leverage on the head-up defender and drive the block out away from the bubble.