The new craze in offensive football is to spread the defense out and chuck and duck the ball all over the field. Empty looks are a great formational edge, because it helps your coordinator and offensive players recognize defensive schemes much quicker. We are primarily an 11 Personnel program; our Empty package is 11 Personnel. Our Empty Package is a count-based package where three different schemes are being run at the same time, and our QB decides where we have a numbers advantage and that's where the ball goes. Very seldom do we throw the ball past the line of scrimmage on this play, which leads to a very high conversion rate. We have been running this set for the last 7 years with a QB rating well over 150 and have yet to have a season with under 5 YPC. 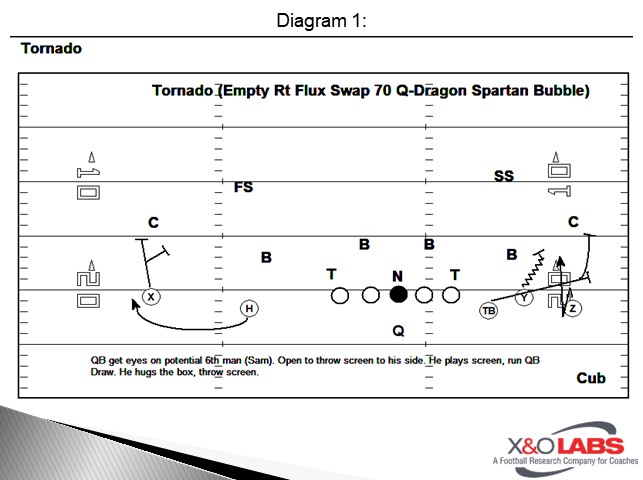 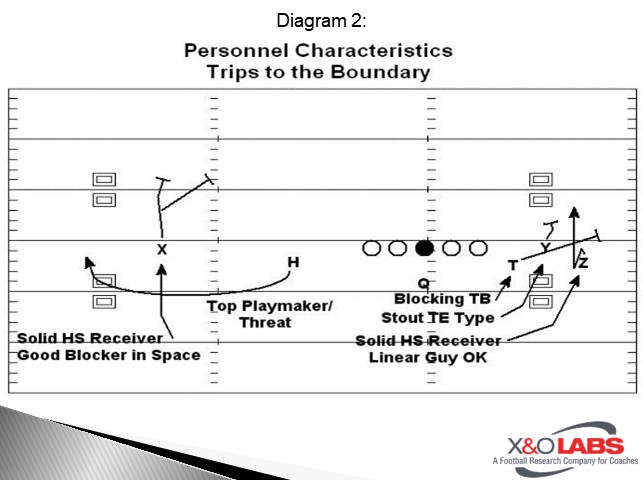 Our Primary set is a boundary trips look with our X and H receivers to the field with our regular 2x2 field alignments. Our Y (TE) sets the trips set to the boundary side with our Z and RB flanking each side in a 1x1 alignment. We tend to run our plays out of this package as a one-word quicks. We are not changing out of our base personnel to run then. We can get lined up and run a play super-fast as the ball is being spot. This allows us to get lined up and either our coordinators or the QB can decipher were the ball needs to go with plenty of time to adjust as needed.

The boundary is running what we call our 3-man spartan screen. The Y (TE) has the key block we call our “ooze” block. It is essentially a down block in space, but it sets the crease for the Z receiver running our Spartan screen. He takes one step forward and then shuffles back one step and catches the ball. He needs to get up the field, make at least the first guy miss and get at least five yards. The running back has what we call the “kick or carry” block. He will take a flat angle with an aiming point of one yard in front of the receiver getting the ball. He has the corner. If he comes downhill quickly, kick him out. If he stays at depth, make the turn and carry block his declared angle.

Our field side is just running our 2-man bubble concept. The X is blocking first force. If everything is equal, we ask him to block the corner with slight outside leverage and stay square. But his initial track will always take him into the ally player. Find the guy that has the best chance of making the tackle and block him. Our H is always our speedster. He will cheat his alignment back a half a yard. Bucket step, cross over gaining depth and width. The quarterback, who is in the gun, will turn his shoulders on the first two steps. If he is under center, his shoulders must stay square to line of scrimmage. Catch the ball and get it to the edge. If the ball hits the ground, treat it as a live ball. Get on it!

Our line really has a week-to-week run set, teams that get upfield with their ends, we will block it as a draw. Teams that hang around and 2 gap everything, well block inside zone steps to the 3 tech. Teams with inside big men that wreck shop, we trap them to slow them down a bit. This can also be transformed into any scheme that fits your program the best.

Here is what the play looks like against some the of most common defensive schemes we see. 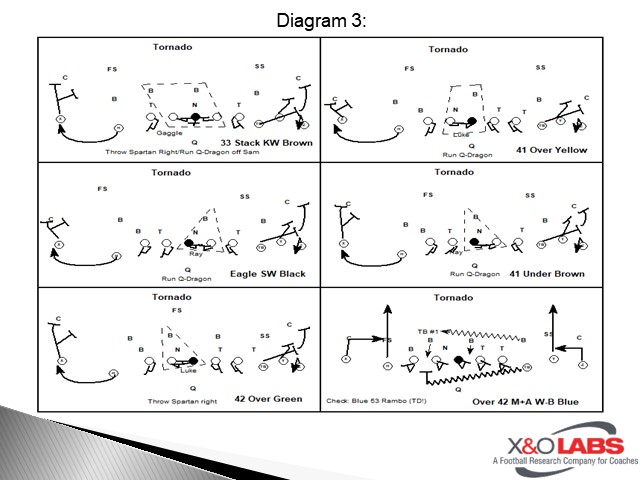 Because this is a pre- or post-snap SRO, the quarterback or the coordinator has the final say on which concept (screen or QB run) to use. Not surprisingly, it’s all about numbers. In any five-man box, the QB/coordinator can activate any of the runs in our menu that week, including zone, trap, draw or pin and pull. In any six-man box, the screen game should be activated because of the numbers advantage.

Surprisingly, you don't need a dual threat QB to run this package, we have run it with pocket-passer and scrambling/wildcat style QBs and have had great success with both. Depending on your QB’s football IQ, these plays might need to be run as “Check-With-Me’s.” Have the eye in the sky (coach in the box) decipher the defensive look and signal in to the QB the best option. As he gets better at seeing it himself, start adding more responsibility on him. When teams start playing games with their alley defenders, the QB can make or break this play. Have them get their eyes on the alley defender and read his movements.

The biggest coaching point is regardless of which screen or run play gets utilized, it’s important that everyone still does their job. If the QB gets a run read, the wide receivers need to still run their screen full speed. The QB knows that there isn't a guy blocking the second level perimeter players for his run. Teach your receivers to embrace blocking, their blocking ability makes this play work. “Return-the-favor” block for your buddy and everyone gets stats. This is a toughness play, we are going to out physical our opponent in this finesse set. Catch the ball and get to your landmarks as fast as possible and win your individual battle.