Like many RPO concepts, this play started out as a simple Power Shovel play. But when our head coach decided to married the bubble play the power shovel it really began to take off for us. This is one of a few RPO plays that we employ, where we will put defensive players in conflict and take what the defense gives us based on a combination of pre-snap/post-snap reads. This, of course, requires our quarterback to process information and make decisions on the fly, but gives him multiple options for this one play.

As part of our spread concept, we put an emphasis on spreading out the box players as well. Our offensive linemen are in a two-point stance with wide splits that could range anywhere from 2’ to 4’ depending on the play. I know that some people believe that having linemen in two-point stance hurts the physicality in the run game, but that would be contrary to my experience. In the five years that we have used this technique, we have averaged over 31 points per game, over 200 rushing yards game rushing, and a minimum of 5.4 yards per carry.

We also want our level off of the ball to be as far back as legally possible. The levels off the ball are the key for the linemen in this offense because it allows them time to use their technique and make their blocks. The rule in South Dakota is that the facemask of the offensive lineman must break the plane of the centers hip. Once our center is set in his stance, the guard will adjust his splits accordingly, and we like to have our guards place the toe of their inside foot, so that it would touch an imaginary line drawn parallel to the heels of the center. Our tackles, then line up their inside foot, so that it would be parallel to the toe of the inside foot of the guard. If you view our formations from the side, you will see the center out and the guards/tackles will be in a straight line, as far back off of the center as we can get.

As a general rule, we are a gap-man blocking team but we often couple those concepts with inside zone rules on the back side. We lean heavily on the skip pull technique for our pullers but we also use open pull techniques at times.

Here in South Dakota, we predominantly see 4-3 and 3-4 fronts and the occasional 30-stack defense. We have found that this concept can work against any of these looks with a few formation changes. Here is a look at this concept against each of these common fronts: 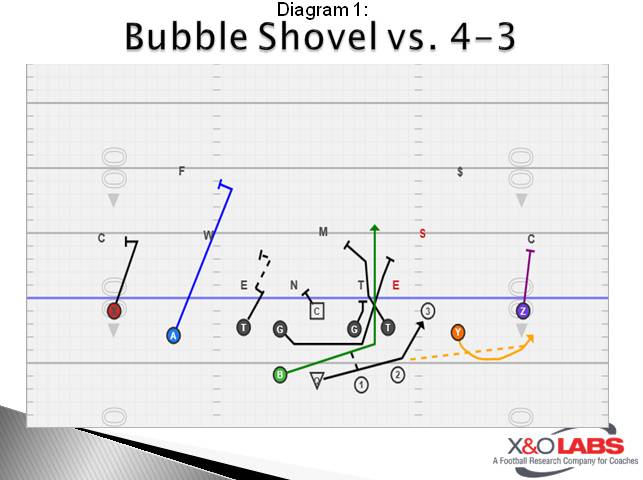 Play Side Tackle: Double the 3-technique to the Mike. Note: We will squash his split down to about 2' for the double.

Play Side Guard: Double the 3-technique to Mike with the tackle and keep eyes on the 2nd level for an A gap blitzer.

Center: Pin or base block 1-technique. Note: We also can pull our C, depending on back side ability and location of the back side nose guard.

BG: Skip pull, staying tight to the double team, and climbing to the Sam backer. It is critical that he does not pass up work on the way to the backer so if he encounters any resistance he will stay on that man.