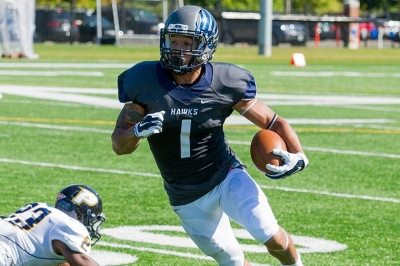 Conventional offenses have often scoffed at the idea of running trips into the boundary, but at St. Anselm College we have found a way to turn this type of thinking into an advantage. We find that by putting trips to the boundary, we force the defense to make a choice; defend numbers or defend space. From there we can build plays to attack the different choices that they make.

To give you an understanding of why our philosophy is what it is here at Saint Anselm College, you have to understand the history of the program since my staff and I arrived here in spring of 2008. When we arrived, we inherited the nation’s longest losing streak (38 straight D-II losses with the average loss by more than 30+ points). We had only 35 players on roster that first spring, the program was dead last in nearly every offensive statistic, and there was zero confidence in the team’s ability to move the ball, score points or be successful at anything.

Unlike the rest of our league, our program had yet to make the jump to scholarships, so we were operating as a non-scholarship program in a scholarship league with some of the toughest admissions standards in the area. We’ve since began to add scholarships to the program, but we are still far behind the rest of the league in scholarship numbers. It is because of these hurdles that we have developed into a no-huddle, multiple read, “smoke & mirrors” offense that relies more on not blocking defenders than it does on scheming to block the outstanding defenders we compete against. For us, we spend time as a coaching staff devising ways to not block these defenders so we “Improvise, Adapt, & Overcome”.
I think our offensive philosophy itself allows us to play at a very fast pace that dictates that the defense play “vanilla”. The FSL package further magnifies that tempo and can handle different fronts/coverages/pressures because it has “built in” answers to each. Along with the base package, we also build a surprise or two into it, just as we do with our base offensive attack, on a weekly basis. So the package is constantly growing and presenting different counters to defensive problems.

We have either lead the league or been in the top 2-3 teams in the conference in rushing, passing, total offense and scoring during our time here at St. Anselm. The last several years our FSL Package has helped tremendously to “even the playing field” against some of the more talented programs we face. Ultimately, it still comes down to “Numbers, Angles, & Grass” and how to engineer those three elements to our advantage.

Depending on what our opponent is doing from a coverage/scheme standpoint, we are capable of reading all 11 defenders in a 2-high shell defense (Diagram 1). Against an 8-man front, we are capable of reading the entire front 8 in a 1-high shell defense (Diagram 2). Who we read will be determined by several factors, some of which are personnel, formation, the scheme employed against us, and where we can turn the numbers angles and grass to our advantage. Throughout the game plan process, we’re looking to take the path of least resistance. We do not spend a lot of time scheming to block the top defenders we face. Instead, we “erase” them by either formationing them or reading them. The FSL package allows us another way to disguise how we are erasing their best defenders. 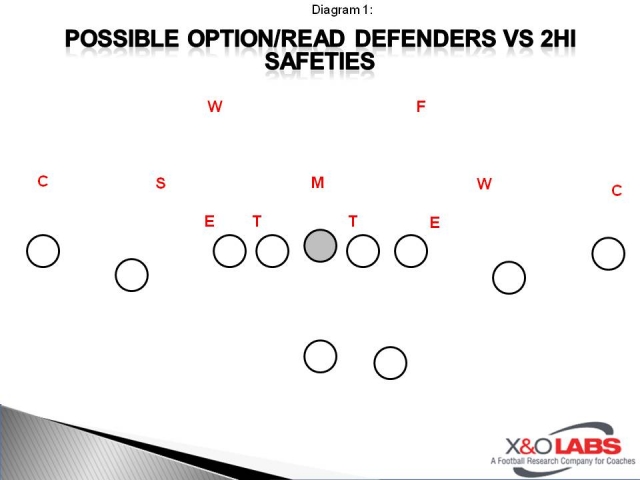 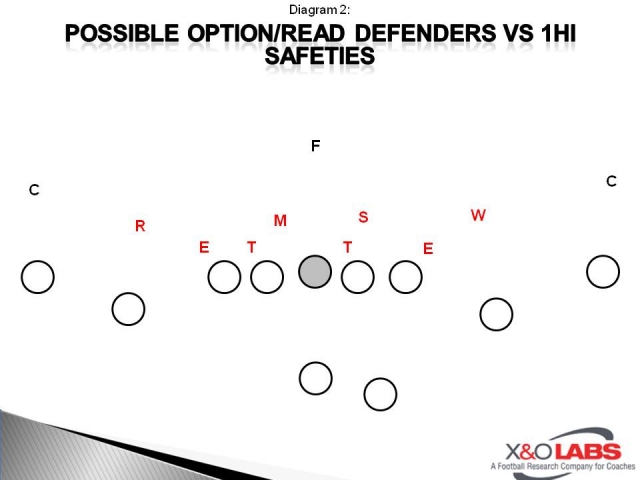