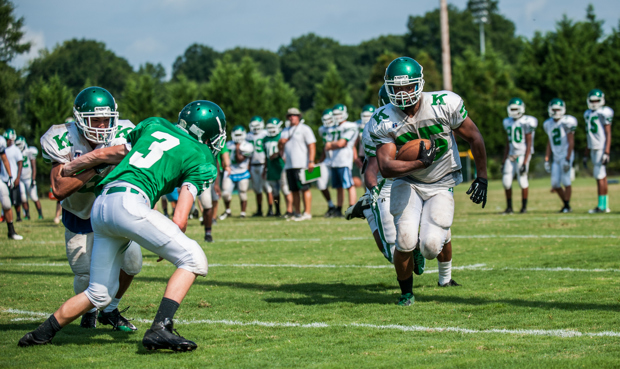 We all like pass plays that gain yards, can be completed at a high percentage, and that involve all of your receivers. This year, the “90 Right/Left” was our go to concept as it combined quick game concepts and boot concepts into one powerful combination. It strained the defense with a pass play that does not have a back side and makes all of our receivers a threat. In turn, they all run hard routes because they all know they could be the guy getting the ball.

This concept involves a 3-step pass to a #1 WR on one side with a 3 level bootleg on the backside. The QB has the option to throw that 3-step pass if the coverage or talent match-up is good for us; then he throws that ball on time. If they take that away then he can boot out the backside. Sometimes we call the specific pass route we want run on the quick pass, other times we will call an option route where the receiver chooses his route based on coverage.

If you already throw a bootleg pass you’re just taking the backside post route and substituting a quick pass. This simple change can be very powerful.

QB: He is looking to the #1 receiver to the right for the 3-step pass. We use only a few of our 3-step routes with this concept; hitch, slant, fade. You can add in more, but we like using only a select few so there is less confusion between WR and QB. We do not use a signal to communicate what he will choose, they must be on the same page. He takes this throw if they are playing off coverage and give us the hitch, slant; or if they’re in press coverage and we have a good match-up for the fade.

If he does not like what he sees we teach him to two hand pump fake a throw there to pull the defense and he will reverse out to get depth quickly to 10 yards, and boot out attacking the backside progression. We like for him to work his normal boot progression, looking deep first then working back down to the flats. He must not take a sack if everyone is covered make a play with his legs in space.