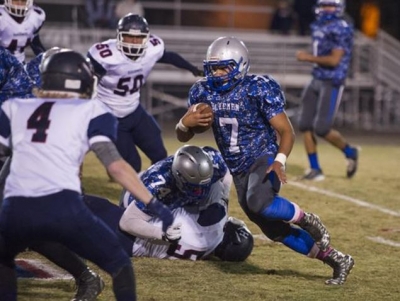 The following article will outline several of the variations of second level run/pass option plays that you can utilize to provide your QB with multiple weapons to exploit defensive vulnerability. Each of these variations is in and of itself a peripheral adjustment of one of our core schemes, and serves to both protect that scheme and also to exploit defensive aggression against it.

It is important to note that this is part of a greater offensive thought progression that started with optioning down linemen and LOS defenders, and has moved to optioning second and even third level defenders in space. Conflicting the eye progression of those defenders who are both run and pass responsible is done by utilizing both surface and backfield reactions. We will highlight how we hope to accentuate these reads for the defense, and then how we put the players in space to attack defensive reactions.

This is our version of the R.P.O. “Stick-Draw”, and serves as a multi-faceted fast-break play requiring very quick and very accurate decision making by our QB. This scheme can be quickly adjusted to better accommodate your quarterback’s skill-sets by improving the run aspect or pass aspect respectively. We like this particular combination play from a 3x1 set with our RB set to the 3 receiver side [Diagram 1]. 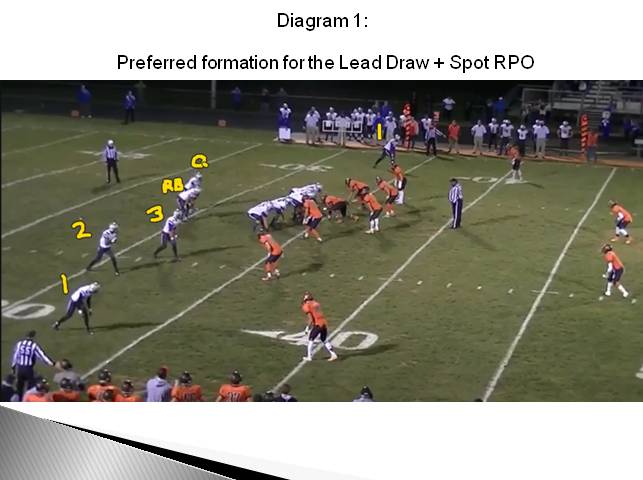 We designate our single receiver as a match-up dependent quick game option. Cover 1 with tight man coverage underneath is the best defense we have seen against all of our RPO plays. The catch for cover 0 and cover 1 man defenses is that your best match up receiver should go to the single side. Doing this provides you with a weapon to attack the one on one match up. Our quarterback is given a series of potential quick routes to use to attack various coverage vulnerabilities [Diagram 2]. We signal non-verbally the route we want to run and the QB has the freedom to attack the match-up if it is available. 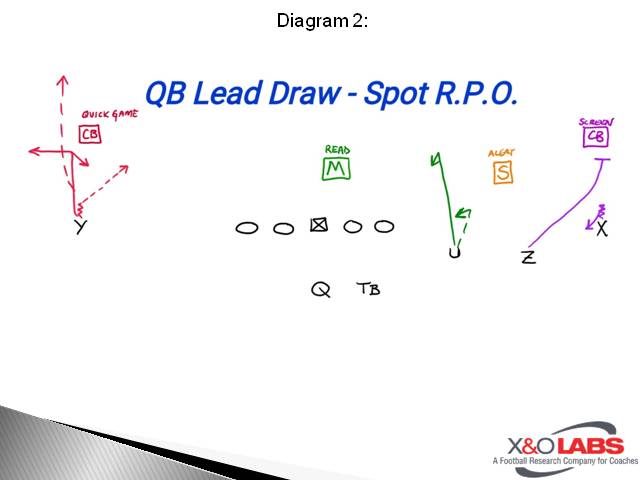 To the three man side, we have the Spot route and a two man screen combination. The keys to the spot route are for the slot receiver to prepare for the opponents specific underneath coverage and what depth and width from the center he will be able to find route space. His job is to attack the inside hook zone between the ILB and OLB on his side [Diagram 3]. Within his rollover step, he needs to be able to identify any open space in coverage, and any blitzer that crosses his face. If the coverage opens very short, he may only be running a 3 yard route. If the coverage space is open wider than his alignment he should stem to that width and sit on the outside half of the hook zone [Diagram 4]. In the case of a blitzer, we tell him if any bad color flashes past you - turn your head, look for the ball immediately and keep running through the zone. We hope to catch that ball on the run. The same goes for any pre-snap press man coverage on the #3 receiver. 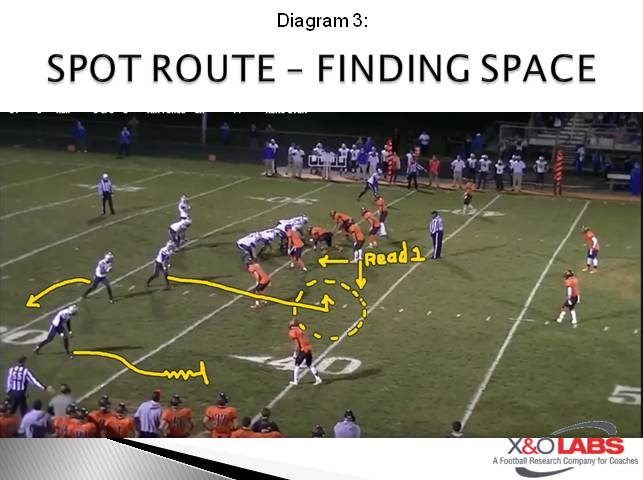 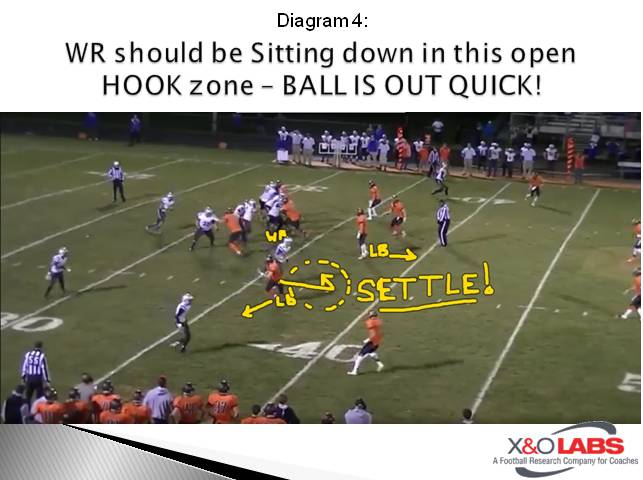 Out wide, our two split receiver’s run a quick screen, choosing the bubble or quick (now) screen to the #2 or #1 receiver based on the depth of the corner. If the corner is aligned with off cushion the ball should go to the #1 receiver. Conversely, if he is closer the ball should be thrown to the #2 receiver. Against press man coverage, they will adjust to a game plan dependent rub combination and both receivers will be in-route.

During the installation process, I have found it beneficial to marry as much of the teaching of our lead draw scheme with our basic ½ slide protection as possible. In addition, if this is to become a primary play for us next season, we will need to mimic many of the techniques we show in our pass blocking. In our ½ slide protection, we pass set man on man at the play-side, and the first uncovered offensive linemen will slide to the back-side to help combo. The same blocking rules will be used for the Lead-Draw.

Our play side guard is the primary coach on the field for the Lead-Draw scheme. He will dictate to the other linemen to the back-side how we will handle the interior cylinder of the play. The guard chooses what to do based on the defensive alignment. He is either “covered” to the play side by a defender, or “uncovered” and has a free gap.

When he is “covered” by a defender, his assignment is simply to “Stick” on that defender, one on one [Diagram 5]. You can have him communicate that with a call, such as “Stick”, or by tapping the center at a specific location on his leg. For example calf tap = covered. If the play side guard identifies himself as uncovered he now becomes a zone combo player with the center, and he will be “hunting” the first Linebacker back side off of the mid-line of the front [Diagram 8 & 9 Below]. He will indicate that he is helping with a verbal call such as “combo” or another tap on the center for example his hip.