Inside Out Read Methodology for the Curl Concept

Coaches across the country are looking for ways to steal easy completions in their passing attack.  Whether it’s perimeter screens, quick game or RPO attachments, it’s clear more and more teams are looking to utilize high percentage passing concepts to help control the box and stay on schedule.  Our offense is no different as we use those strategies to help open big-play opportunities and keep the whole playbook available to us.  When execution is on point, this is a great strategy.  The question for a coordinator is what you do when a team has a personnel advantage in the box and can still use underneath defenders to take away easier throws.

The easiest answer is to attack vertically; however, this is often a low percentage strategy, especially on obvious passing downs.  This means we as coaches are forced to address how to attack the intermediate areas of the defense.  While we have used a wide variety of great concepts to attack the intermediate areas (drive, shallow cross, mesh variations) we have found using variations of the curl have been a higher percentage option to help us move the chains.  Much of this is due to the nature of the throw.  When the curl works back to the QB out of his break, he becomes more of a fixed target. This can lead to more difficult opportunities for yards after the catch, but we feel the value of completing the curl is that it keeps the offense on schedule and opens up more vertical throw opportunities. We want the defense to decide if they are willing to give up plays underneath the last level defense or if they want to take it away and be more susceptible to big plays.

There are a ton of different ways we’ve implemented the curl that I will share in this article, but I think it’s important to understand the principle behind the concepts: reading the various curl concepts inside out.  This is a significant shift from the way I learned the concept as a young player and coach as many offenses look to put an immediate stretch on the alley (curl or flat) player.  While we agree that we can put that defender in conflict, we have found that reading it inside out forces the zone to expand more.  This forces the alley player to declare his assignment and gives the curl time to get to depth and hunt for space.  This also changes how you approach the route that attacks the flat.  In the outside-in progression, the route attacking the flat can become your primary route as teams will coach the all to gain depth and rally to the flat.  In the inside out progression, the out route essentially becomes a check down throw.  This allows us to get the ball to the curl more often and when it does get to the flat, we usually have more room for yards after the catch. 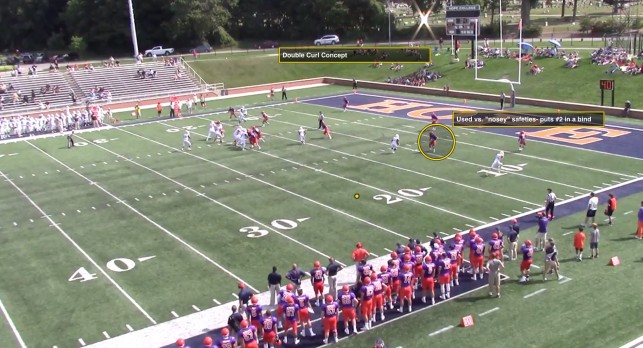 Installing our base Curl Concept

We install our Curl Concept from a 3-man surface. This is our home base as it gives us the most flexibility to vary the concept.  As we progress, we work to variations from a 2-man surface.  Since we progress the curl concept begins inside out, we teach it the same way so for us the Curl begins with the number 3 WR. 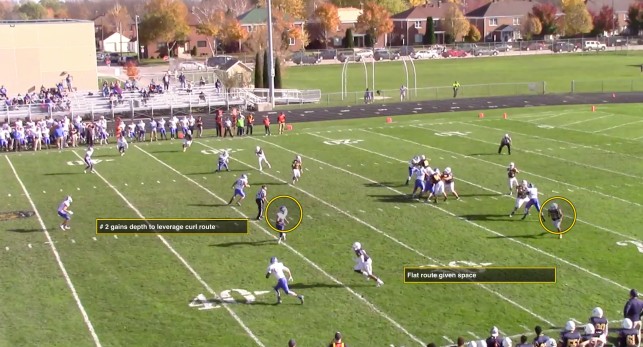 The #3 WR runs what we call a shield route.  His job is to get to the inside shoulder of the #3 defender (often the Mike) as fast as possible.  While we don't coach the depth because it's based on the defense, it usually is 5-6 yards.  He sets the windows of the zone.  For fast-expanding teams, he will receive the football early and often.  For slow expanding zones, he will hold the #3 expansion and create bigger windows for the Curl.  The shield route is also our "Hot WR" as he can immediately replace and interior blitzes/ fire zones.

The #2 WR primary route is our 4-step speed out.  His job is to attack the outside shoulder of the #2 defender (usually a SS) and break hard on a 90.  If it's man coverage he is a great option (especially in short-yardage or weekly matchups).  If it's zone he is opening the curl window.  Since he is the last route in the progression, the out route can run himself into the sideline.  If this is the case, we teach him to face up the QB and gradually gain depth upfield.

The #1 WR runs the curl route.  We coach the curl to get to 14 yards and hunt back into the curl window as fast as possible.  Attacking the window is critical so we work hard on being efficient at the breaking point and accelerating to the open space.  Coverage recognition helps our curl runner as well.  We want him to be able to see if the #1 defender (CB) is a deep zone player or hard flat player.  This impacts his stem and where he anticipates the window of the curl.  Against a deep zone player, we work to sell vertical and gain inside leverage.  Against a hard-flat player (Cov 2 or cloud looks) we attack the frame, sell inside and shave throw the outside shoulder for a smoother vertical release.

Our QB begins the concept by going through his pre-snap checklist.  All our concepts are built to attack a numbers advantage with a strong, weak and box answer to the defense.  To make this happen it’s crucial that our QB goes through our 3-step checklist before the snap of the ball.