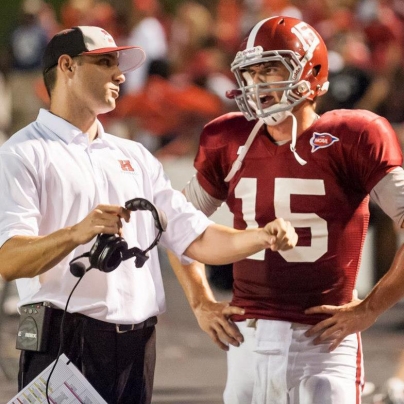 Editor’s Note:  Mike Volarvich is going into his 5th season as offensive coordinator and quarterback coach. Volarvich has been instrumental in making Henderson State the top offensive team in the country leading the nation in scoring in back to back years.  In 2013 the Reddies led the nation in scoring (53.3 points per game), Total Offense (576.4 ypg), Passing Offense (428.4 ypg), and Touchdowns per game (7.17 TD’s per game).  Working primarily with quarterbacks, Volarvich has coached All-Americans Kevin Rodgers and Nick Hardesty who were both finalists for the Harlon Hill Award.  Prior to his arrival to Henderson, Volarvich was the leader of a potent EMCC scoring offense which led the NJCAA in passing offense and finished second in the nation in total offense.  Coach Volarich also runs www.scortchedearthoffense.com.

This past year, our offense here at Henderson State University (D2) just finished its best offensive season in school history.  When the dust settled, we led the nation in scoring offense (53.3 ppg), total offense (576.4 ypg), passing offense (428.4 ypg) and TD's per game (7.17).  Of course there are many piece of our system that contributed to this success, but perhaps none more than our flexible Shallow concept.  In the past 2 years, we have thrown the shallow concept 69 times completing 65% of those passes.  Over that period, we averaged 18 Yds per completion and 11.8 Yds per attempt.

When we run the “shallow” it is designed to get a high/low read on a linebacker.  At the same time, it has the ability to generate a 1-1 matchup while allowing us to get the ball out of the QB’s hand fast.  We also like this play because we can run it out of any of our 2x2, 3x2, and 3x1 sets regardless of the coverage that is being played.  Here are our rules for the Shallow Concept: