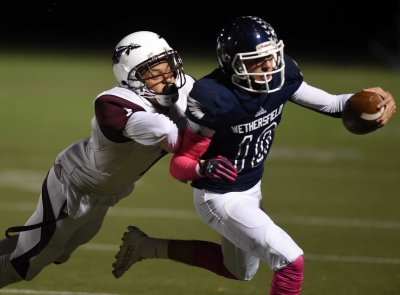 RPOs have been a major part of our offense for the past couple of seasons in part because of the type of QB we’ve had. This season we replaced our all-state QB with an athlete who was one of our leading receivers the previous season. A lot of time was spent in the offseason as well as the pre-season developing a game plan/offensive identity that fit our new personnel, especially in the backfield. We needed more than just the Zone Read and the Power Read to stretch the defense with our speed at the skill positions as well as our running ability with the QB.

Our horizontal run read or “HROs” are designed to stretch the defense and force them to stop the run from sideline to sideline, hopefully slowing down our opponents ILBs and keeping them honest (Diagram 1). These packages aren’t entirely new, but just a combination of traditional Zone Read and Power Read. This season, HRO’s were a small part of offense but we still managed to average 8.5 yards per play (including plays where the QB predetermined and/or made the incorrect read). 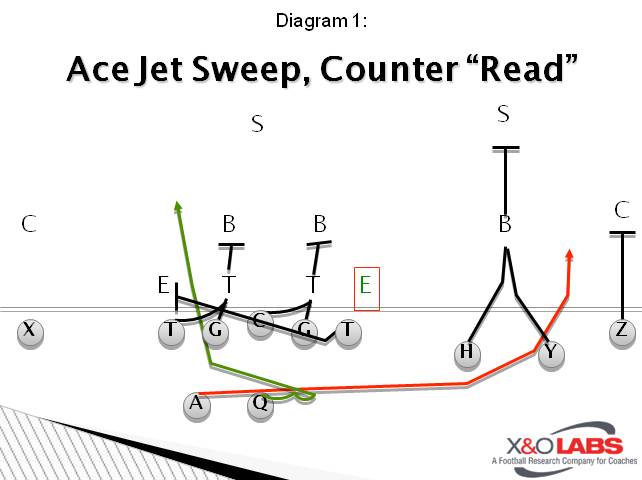 Much like the Zone read, the play is designed to stress the front side and the backside of the defense. Since the read comes from the play side DE and not the back side DE, it helps to eliminate some of the strategies that a defense will use to stop zone read (i.e. scrape exchange).

Much like the Power read, the play is designed to stress the assignment of the “end man on the line” (EMOL). In a 4 man front, the edge player or EMOL is usually a pretty easy read just based off of alignment. Against a 3 man front, the read gets a little more challenging as it’s usually unknown pre-snap whether or not that EMOL is going to be a “C” Gap/Contain or a “B” Gap player.

If you broke the hand signals from the sideline down into a sentence it would read (after the formation) “Running Back Jet Sweep Left, Counter Right, Read,” as an example. The skill players are looking for the initial information of which player is tagged and what concept they’re running. They are taught (in our offense) that the “Jet Sweep” is always blocked by the skill players when a “run play” follows in the signals. When a pass concept is signaled following the jet sweep, the receivers will run the pass concept instead of blocking the Jet Sweep (this would be in our RPO concept).

The QB is taught to look for the “READ” hand signal, which tells him what information he’ll be providing to the Offensive Line. If the signal came in as “Running Back Jet Sweep Left” then the QB would be providing the offensive line with whichever code word represents “Jet Sweep” in our offense, but once you add in the “READ” hand signal at the end of the play call, the new preceding run blocking concept would be relayed to the offensive line.

I don’t always like to refer to the EMOL as the read player, because a lot more goes into deciding whether or not we hand the ball off to the running back or keep it. For example, our QB will make an RPO count on every play. He does this on both sides of the formations allowing him to always know “who the read” player is on RPO concepts. This simple math also lets us know whether or not we have a blocking advantage in the Jet Sweep or not. While this count might slow players down initially, but in the end it’s no different than having a player count the box to determine run/pass.

If we are running an RPO, we label defenders in alphabetical order starting from the CB or the defender closest to the sideline (Diagram 2). 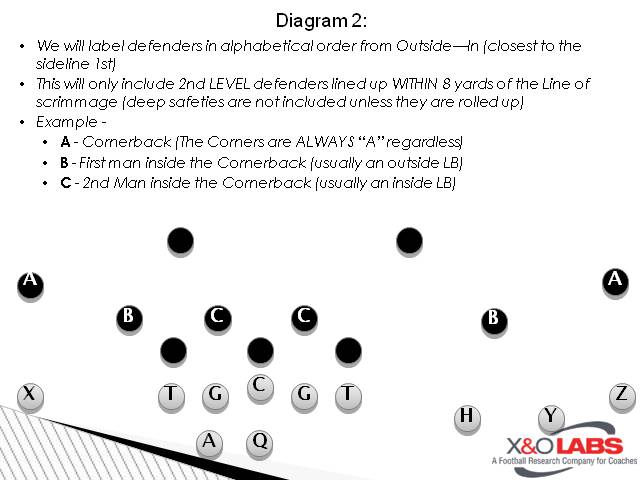 Note: for more on this approach to labeling players, read the report by Western Connecticut’s Drew Owens.

We only count players who lineup within 8 yards of the LOS before the snap. Often times, if a safety’s pre-snap alignment puts 3 defenders over our 3 receivers, then it will make the “pre-snap” decision for us (Diagram 3). 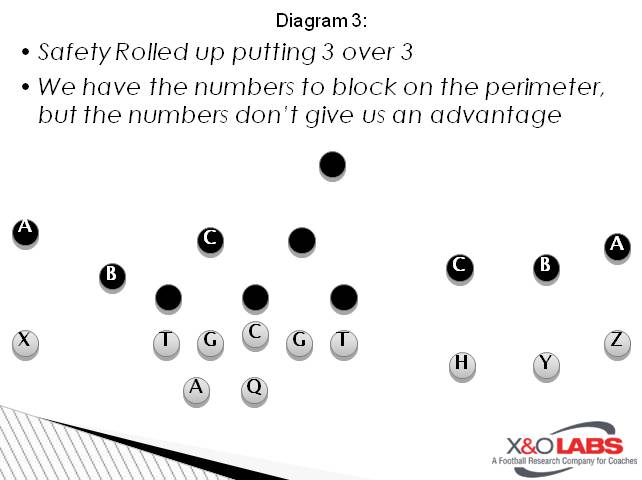