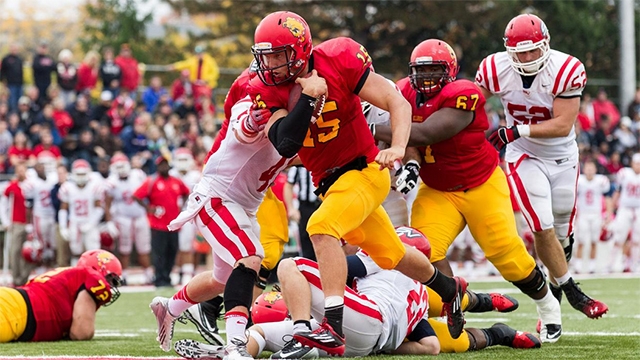 At Ferris State University, we have experienced a great deal of success over the past 5 years including 2 GLIAC championships, 3 playoff berths, and an overall record of 48-11. This success can be attributed to a multitude of factors, and one of the many factors has been the success of our offensive run game through our spread option attack.

As part of our spread option offense at Ferris State, we employ 10 and 11 personnel sets to spread a defense from sideline to sideline in order to create room for our quarterback to make reads and get the ball to athletes in open spaces. This includes a heavy dose of the quarterback carrying the ball himself. This type of offense allows us to make the most of our blocking resources by reading a hat at the point of attack instead of having to block him.

In our time at Ferris State, there have been a number of concepts that have been incredibly good for us and our offensive output but there are a couple that stand above the rest. If implemented correctly, we believe these concepts can be the difference between making a run at a playoff spot and struggling to find the offensive efficiency that every team desires. In this article, I am going to break down a couple of plays that have become staples of our run game and, in turn, our success at Ferris State University. 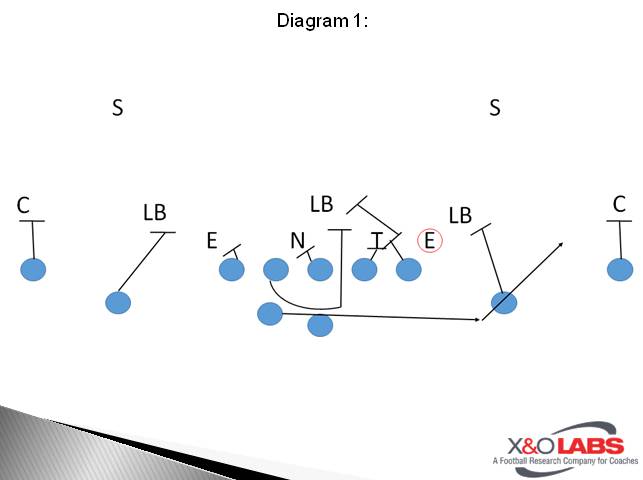 The Power Read concept employs a hybrid of a traditional power scheme and a read option scheme and uses the mixture of schemes to gain an advantage with a tailback perimeter run or a quarterback downhill run into open space.

On the read side of the play, the offensive tackle releases to the backside linebacker “chipping” the 3 technique (if there is one) on his way in a technique that we call a “bang release.” The play side guard blocks man on; this could mean blocking a B gap player or an A gap player and leveraging him whichever way he needs to in order to create movement. The center is blocking back for our pulling guard. The backside guard is pulling and horning for the play side linebacker. His job is to horn through the available gap created by the play side guard and is on to the linebacker similar to what he would do on traditional “power o”. The backside tackle is sealing the inside gap and if he feels on pressure inside he will then attack the backside end to make sure there is no back side pursuit.

On the perimeter the slot and outside receivers are attacking the man over them or the most dangerous man in terms of making the play on the perimeter tailback run. This is important as their job is to create space on the perimeter as that is where the focus of the defense will be.

When power read is executed correctly, the defense has a huge burden to stop the perimeter run and still not give up the big play on a downhill run. It is an easy enough concept to execute that the burden is on the defense rather than the offense and that is where you want to be as an offense.

The objective of the block is for the guard and tackle to work on a 45 degree angle to the backside LB of our Power scheme. It is the guard's job to stall the impact of the DT, and the tackle's job is to create movement.