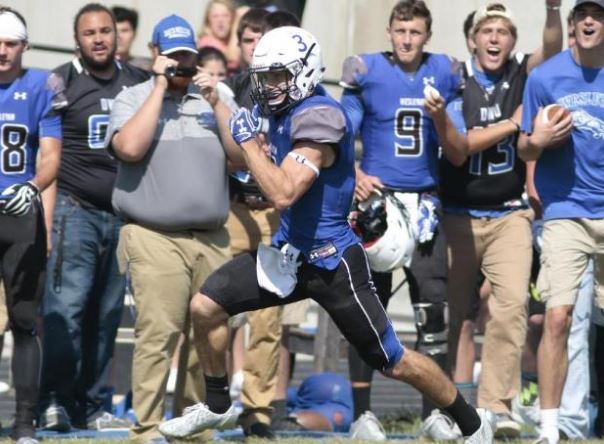 The Dig-Pivot Concept is a simple read for the quarterback and allows an offense to attack the defense in multiple coverages. The dig-pivot concept is an efficient concept that requires great timing from our quarterback and wide receivers. The quarterback reads the wall 2 defender, usually an outside linebacker, and makes him wrong based on the drop he takes in coverage.  The dig route is also very difficult for a cornerback to cover and run with if the receiver makes a great break.  Another great aspect with this concept is that the dig route stays on the move and the quarterback can throw the ball into the first window right out of the receiver’s break or the second window after he clears a dropping linebacker or safety.  The pivot route forces a wall 2 defender, usually an outside linebacker, to hold his ground or work to the receiver because the route is attacking the defender before breaking out toward the sideline which creates great timing to throw the ball into a great window.  The concept is simplified based on the quarterback’s pre and post snap reads.

Dig: The outside or #1 receiver runs the dig route working to flatten out at 12 yards.  The receiver pushes vertical to ten yards before planting on his outside foot to make a speed cut which allows him to climb to 12 yards depth and then stay lateral aiming at the opposite sideline.  The receiver uses his inside arm to hammer back, helping him to maintain balance and accelerate out of his break.  It is imperative that the receiver violently sinks his hips to help create force from the ground to accelerate out of the break.

MOF Clear: The MOF clear route is run by the #3 receiver. The #3 receiver is taught to run up the middle of the field.  The quarterback can blink (pre-snap read) the MOF clear route against a Cover 0 (Man Coverage) look or if the two high safeties are aligned outside of the hashes or working off the hashes to the outside on the snap.  Those are the few times this route is thrown as it is primarily a clear route to get safeties away from robbing the dig route.