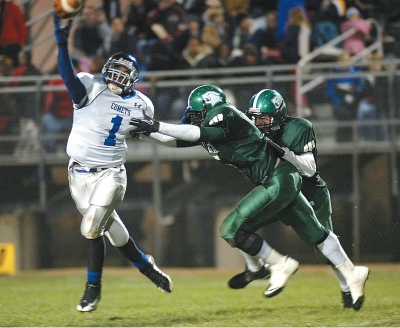 Our Sprint-Out passing game provides our offense with a safe and efficient way to move the ball with high percentage throws while at the same time allowing us to target our playmakers ( Two CCHS receivers in top 5 in catches in Central Ohio). Anytime we can attack the perimeter and put pressure on the defense, we feel we have successfully created an opportunity for a big play.  These are crucial for us to meet our goals of running  plays that are both high percentage  (70% or better completion percentage) and highly efficient  (55% of better efficiency rating).

Protecting the QB is obviously a priority with this package. We incorporate a slide protection.

Theobjective is to make sure the defender’s outside pursuit is cut off. Inside penetration can becountered by “washing” the defender into the line. But with today Odd Front and Stack defenses, you can’t always say that the DE will be the man that the play side tackle will end up blocking. Add this simple term to all of you pass protection schemes “Slide to Air, Be Aware!”