Variations of the Sail Concept

The Run and Shoot "GO" Route is a staple of the offense. Since the day Mouse Davis put it in, it has been a winner because of its morphing qualities. Correctly taught, it can be one of your more consistent plays that carries a big-play potential.

WHAT IS THE GO ROUTE?

At the onset, the "GO" route looks like there is nothing special about it. And it is a basic flat route that gets the offense a consistent 5 yards for each completion. As a play-caller, I like a consistent 5 yards. So, calling this play repetitively is something I am happy with. But what makes the “GO” route worthy of a whole article? Well, it is the “magic” that happens once defenses try to take away the basic flat route.

We have been running this play as part of our offense since 1992. It has evolved from an under-center quick game route to a shotgun intermediate yardage play. The reads have adapted from a simple flat defender read to being able to handle the multiple zones and combo man coverages we see today. This article will give you the drills and answers to the common defensive adjustments we see. 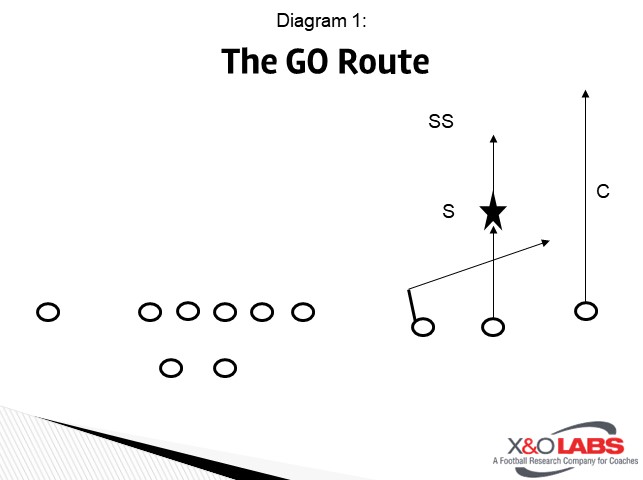 SEAM READ – Everyone Does It

As you can see the basic route package consists of a Mandatory Outside Release (MOR) by the #1 receiver, a Seam Read by the #2 receiver, and a Shoot route by the #3 receiver. These are basic routes except for the Seam Read. This is the route we spend most of our time teaching and drilling. All three receivers will be drilled on this route due to our variations of the play.

The #2 receiver will run his Seam Read after answering two questions. 1) Where is the Sam Linebacker and 2) “Is my route capped?” We want the Seam Read to attack the outside shoulder of the Sam Linebacker. Once he is even with the Sam, we want him to “gear down” and “rub”, making it difficult for the Sam to get to the Shoot route. In drills, we will place the Sam inside the #2 and then outside the #2. If the Sam is inside the #2 then the “rub” is easy. If the Sam is outside the #2, then the “rub” may not happen. We still want the #2 to attack the outside shoulder of the Sam. If the Sam plays over the top and slides to the outside, the #2 will look for the ball on his back shoulder if the route is capped by the safety. If he is not capped, his route should continue up the field. All three receivers will run the Seam Read drill. This is first taught without a ball being thrown. Once all receivers get a feel for the Seam Read, we will bring the QB in and throw the route with three defenders. The Sam, Strong Safety, and the Cornerback.

The QB’s reads start with the same questions asked by the Seam Read route, “Where is the Sam?” and “Is the route capped?” For the QB, if the Sam is inside the #2 receiver, we want to read the CB. He will high/low the CB with the Shoot and MOR. If the Sam is outside the #2 then we will read the Sam and high/low him with the Seam Read and Shoot routes. The "capped" Seam Read should get a back-shoulder throw to protect him from the safety. If the seam read is uncapped, then we can throw the ball out in front of him.

We want the ball out of the QB's hand quickly. Once the QB catches the snap he will take 3 quick drop steps on an angle toward the GO route. On his third step, the ball should be delivered. If not, he should pump fake and then hit the open receiver in his secondary route.