Last week, X&O Labs presented the first installment of the four vertical concept – a staple for most programs entering this busy 7-on-7 season. We touched on pre-snap landmarks and post-snap route progressions for the outside and inside receivers as well as QB read off of one and two high safety defenses. Quite frankly, we were impressed with the intricacies of how coaches teach and develop this concept. There are various tweaks and adjustments that coaches make to the scheme based on factors like safety depth, corner leverage and linebacker leverage, etc. so we’ll start this week’s research report on how to utilize the four vertical pass game out of 3x1 formations.

It would be silly to address the four vertical concept without detailing how coaches utilize it out of 3x1 formations. We’ve found that this concept is becoming more present in these unbalanced formations, mainly because of two distinct reasons:

1. You have the presence of three vertical threats to one side of the formation. 2. You have the ability to isolate the single receiver (X) to the backside of trips; often creating a mismatch with your better receiver on the boundary cornerback.

Route Progressions for 3-Man Side:

Not surprisingly, we’ve found that when using the four vertical concept out of trips formations, 76.6 percent use the opposite hash mark by the number three receiver in trips as a landmark. Many coaches will call him the "slicer" in the concepts, literally because it’s his job to cut through the defense, ending up on the opposite hash. In whatever way he gets there, he MUST make sure he influences that backside safety to distort his read (Diagram 1). 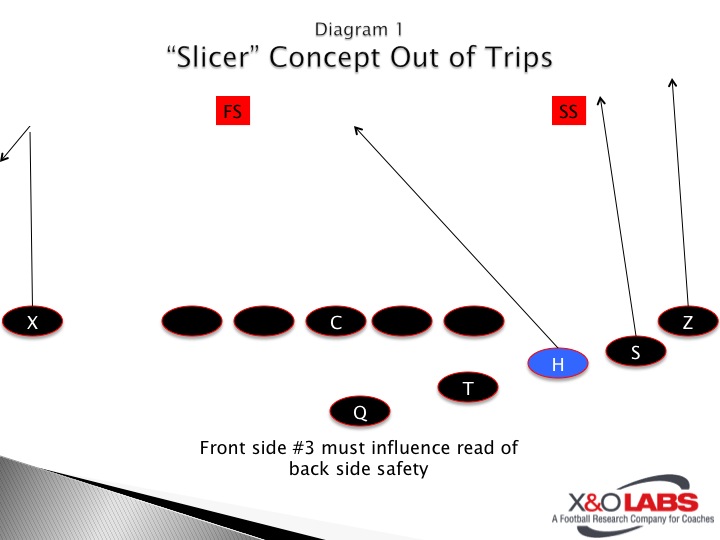 Nick Hajjar, the offensive coordinator at Ohio Northern University feels that the number three receiver in 3x1 formations should be the catalyst for the success of the play. It’s his job to understand coverage’s and what path he needs to get to his landmark, which is fifteen yards downfield crossing the near safety. Of course, which safety this is may change based on coverage, but he must find the best path to influence that near safety and react off his movement.

"Basically, we tell him (#3) to go over the Sam LB and under the Mike LB (Diagram 2)," said Hajjar. "That Sam should be splitting number two and three or over number three so he’s already underneath the Sam. He’s trying to catch that ball fifteen yards down the field over his shoulder and the ball should be on a rope. The QB shouldn’t be leading him out to dry." 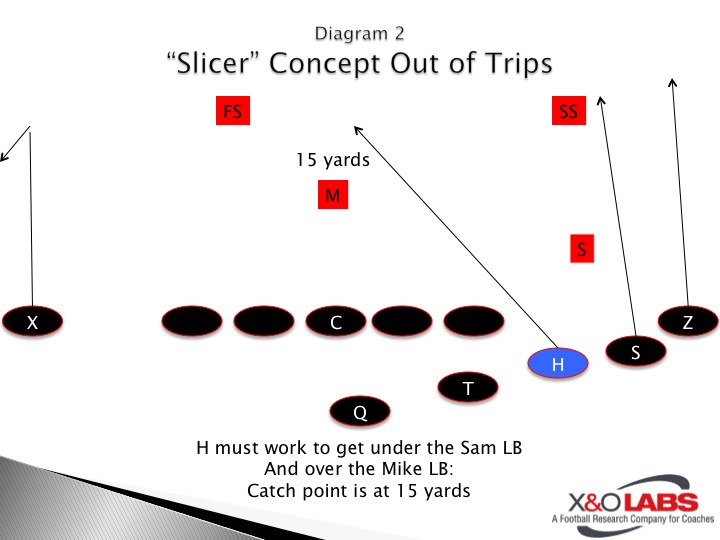 While Hajjar admits that his first read in a 3x1 progression is the X because of the possibility of single coverage, his QB must be able to decipher between "depth" and "width" safeties in any two deep shell. How can a QB tell if a safety will play with width or depth post-snap? Hajjar believes it’s all in the demeanor of the player. "If they are width safeties, they are opening up with their outside foot and getting into a crossover run for three steps and then backpedal," he claims. "Some will weave at an angle, but it’s pretty easy for our QB’s to see their demeanor. If it’s a depth safety he’s on a vertical plane on a backpedal."

So what’s all this mean? "If we get cover two with a safety getting depth, we may be able to throw that ball to the X right in the spot in the 15 yard rule and we’re off to the races (Diagram 3). But, if we see that post snap safety get width, we’re off him now, hoping we can get number three who is replacing his vacated area (Diagram 4)." 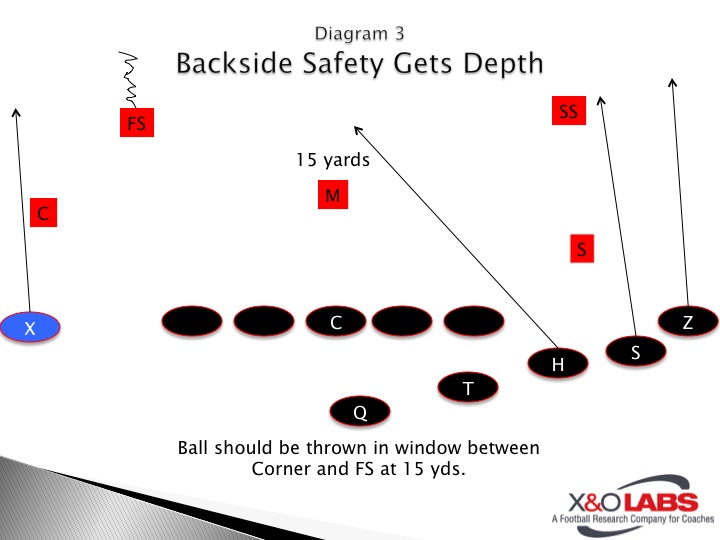 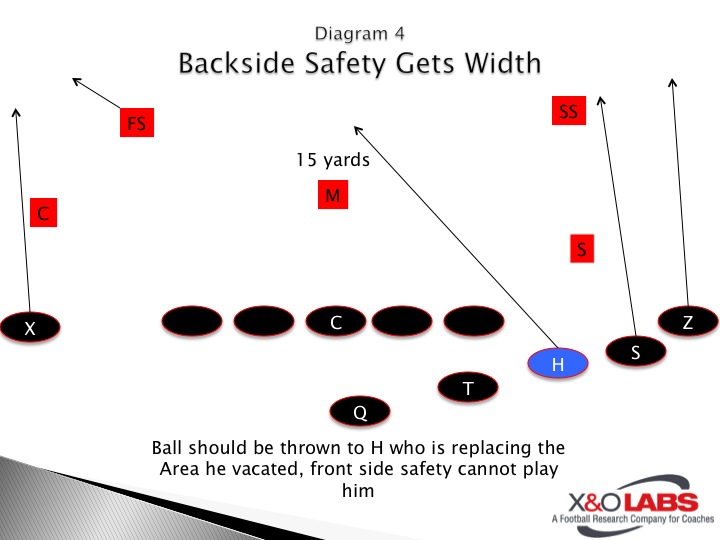 "The key for us is the number three receiver must understand whether it is a two-high or one-high safety read, and he has to do it immediately after he clears the Mike linebacker." says Hajjar. "After he gets over the Mike, he has to understand is it one high or two high safeties. If it’s two high, we tell him to ‘split the crotch’ of the backside safety and go right down the middle of the safeties as quick as you can. Once again, we’re reading the boundary safety. If that safety is getting width, there is no way that front side safety to get over to play him. The biggest thing our number three has trouble with is the backside safety doesn’t get to the midline vs. trips. He gets just inside that backside hash and works for depth. By rule, our number three must cross his face, but he will see that it’s two high so he will take the middle of the field. So, if our WR messes up, he needs to just take the top of the route and get vertical and we’ll pass him up on our progression."

What about a one-high safety read? "If it’s one high, he’ll speed roll that thing in front of him to the opposite hash (Diagram 5)" says Hajjar. "The rule is to still cross his face." Hajjar even classifies some form of Tampa 2 coverage to be one-high because of the depth of the Mike LB. "Some teams will drop the Mike to 15 yards which is where we are telling that guy he should expect the football," he says. "So to him, that’s really a one high safety look. He’ll play his rule and speed roll in front of the Mike (Diagram 6)." 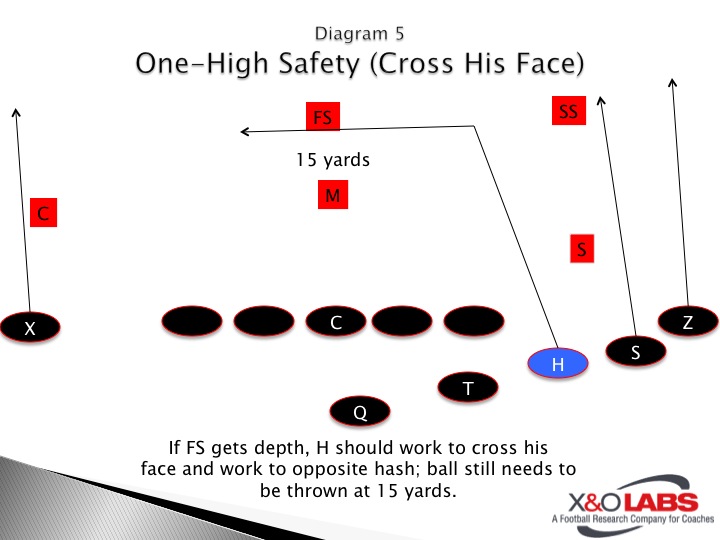 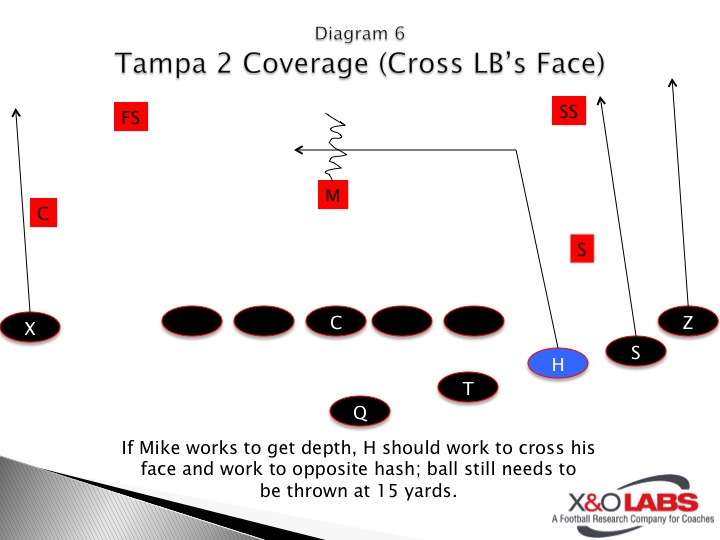 To see video of those adjustments that Hajjar makes out of 3x1 click on the link below.