Grand Valley State Redefines What It Means To Be Open

X&O Labs Editor’s Note:  Perennial Division 2 Powerhouse Grand Valley State University was kind enough to invite X&O Labs Managing Editor out for an exclusive look at their practice.  While there, GVSU’s Quarterback Coach Jack Ginn went into great detail on how they coach their quarterbacks and receivers to make explosive plays in the passing plays in unconventional, but highly effective ways.  The following report includes an exclusive interview with Coach Ginn and an in-depth  practice review that shows how GVSU has built its practices around its vertical passing attack. 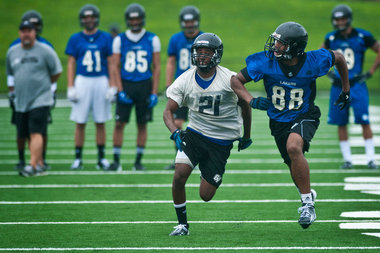 Grand Valley has always been able to score points.  Dating back to its emergence on to the national stage under now Notre Dame Head Coach Brian Kelly, they have done much of this scoring by pushing the ball downfield in the passing game.  I have personally set through multiple clinic talks by Kelly and his successor and now Notre Dame Offensive Coordinator Chuck Martin where they detailed both the importance of throwing it vertical and the schemes they use in that part of the game.  I was always amazed at how they were able to be so consistent in creating big plays with these relatively simple schemes.

So the question is… how are they able to be ranked 5th in the country in passing efficiency in 2012 and 1st in 2011 if they are so focused on throwing vertically.  That is what I set out to discover as I visited Grand Valley and sat down with their Quarterback Coach Jack Ginn.

SN:  Coach I know that you guys are big in throwing the ball down the field.  Throughout practice today, you guys worked it deep and often.  Give us an overview of how and why you guys do this so effectively.

Well here is what it all comes down to, we will always be throwing the ball away from the defense.  For us, it is almost like a two play call or a read option.  When we throw the vertical passes we think that if we are isolated one on one there is no covering our players.  We will always throw it to space where our guy can get it.  We encourage our guys to not run the play like it is on paper, but instead to throw it where they are not.

When we talk vertical passing game, we are working to get the ball to the outside of the field.  The only exception, of course, is when the defense is in a 2 deep look.  We recruit that as well.  We want tall guys that can go up and get the ball down the field.  We really think this works well because you don’t have to have a great arm or great speed to make it work.  What you really need are guys who can track the ball.  They need to have depth perception and need to be like outfielder. 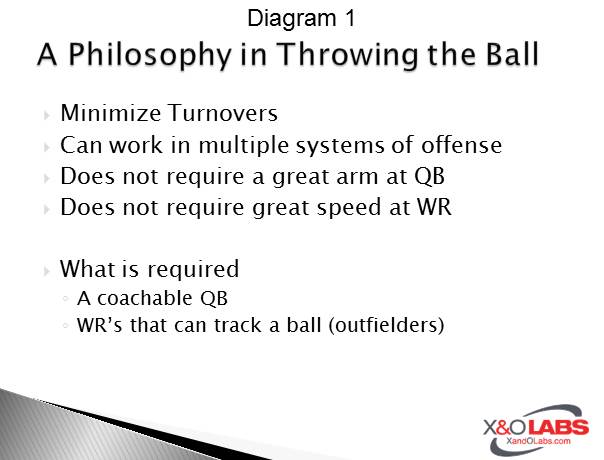 SN:  How do you drill that stuff coach?

Well one drill we really like is to run our screens (diagram 2) and then follow it up with the go routes.  Our players get so ingrained to the short outside throw that our DB’s start playing for it.  At that point, it becomes a battle of wills as to who can be the shortest and most outside person on the deep balls.  We counter that be moving from the short routes to working the go routes down the field with a focus on working to get vertical and beat someone.  Don’t get me wrong, it is very rarely that we do blow by someone and run in open field, we don’t have a single guy running a 4.5.  That said, we need our guys to work to it to allow the play and spacing to develop underneath.

So how do we go about getting the reps?  Well it is simply what we do.  We start pre-practice with go routes on air.  The majority of our routes in 1 on 1 drills are go routes.  We hang our hat on our ability to make those plays.  If we can’t win the deep balls then we will not be able to control the pressure. 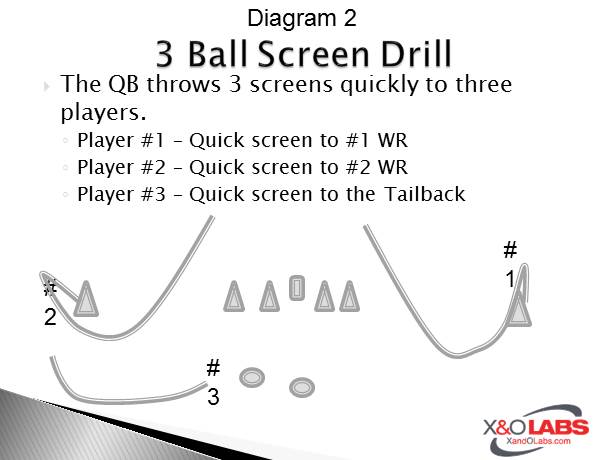 SN:  So you guys really use the deep ball to set up the rest of your game and control how the defense tries to attack you.  That makes sense coach.  I saw that throughout practice.  So what are you telling the quarterbacks as they are throwing these routes?

We tell them that they should either drop it on his head or throw it outside of him.  But of course we can’t do that if the corner is outside.  I explain by comparing this to a basketball player posting up in the lane.  As long as the post player has the defender on his hip, then you lob the ball to the open space so he can go get it and win the 1 on 1 matchup.  If the defender moves to a different position, they lob to a different spot.  In our passing game, we never throw to a spot.  We will always throw away from the defense even when it isn’t a vertical route.

SN:  That is interesting coach.  So if you are throwing to space, what are you teaching the quarterbacks to determine who is "open?"

Well here is a diagram we use to teach that concept (diagram 3 below).  In the upper left you see a guy bracketed by 4 defenders.  It is going to take a hell of a throw to get him the ball and have the ball not be toward any one of those people.  If you take away one of those players (upper right) then we think we can get that guy the ball if we throw it where the defender was removed.  Similarly, if you take away two of them (lower left), we then it almost becomes easy.  If you take away three (lower right), then we have all sorts of options.