From Mouse Davis to Hal Mumme to Mike Leach, the four vertical pass concept has redefined offensive football and continued to leave its footprint on the landscape of every level.  Each coach that experiments with it, leaves their own distinct tweak on it, and in turn a football benchmark is developed.   X&O Labs first delved into the topic in an exclusive interview with Atlanta Falcons’ offensive coordinator Dirk Koetter that opened up the floodgates to an in-depth research project that culminates with what you see below.

The four vertical pass concept is a football discipline that gets researched every off-season (for various reasons which we will detail below) and for that reason, we wanted to provide what we felt were various ways to implement and more importantly devise the concept in ways that can fit your personnel. We’ve found that perhaps what started as a "run straight down the seams for the end zone" concept has morphed into a "take what the coverage gives you" opportunity to make plays in space.

So, right in time for 7-on-7 season, we present the first of a two-part series on the four vertical pass game.  What you see below will focus more on researched based information on what we’ve found were the most efficient ways to be successful running the scheme, while next week will detail some tweaks and changeups to the original concepts that coaches have used.

Case 1: Outside Vertical Landmarks and Adjustments

Considering all things equal, with the ball inside the hashes, 59.8 percent of coaches teach the bottom of the numbers as a post-snap landmark for their outside receivers.  In the four vertical concept, it’s the outside receiver’s (or number one as their commonly referred) job to stretch the cornerback and adjust this route off of them. While giving coaches the option of whether they teach a comeback, stop or speed out route on the outside - 67.8 percent teach comeback routes (Diagram 1) in their four vertical package.  Of these 67.8 percent of coaches that teach the comeback, 36.3 percent teach a 15-yard break point while 32.6 teach a 12-yard break point when making their decision to adjust to the corner.  We’ve found that this all depends on where the receiver can get leverage on the corner, thus making it easier throw for the quarterback. 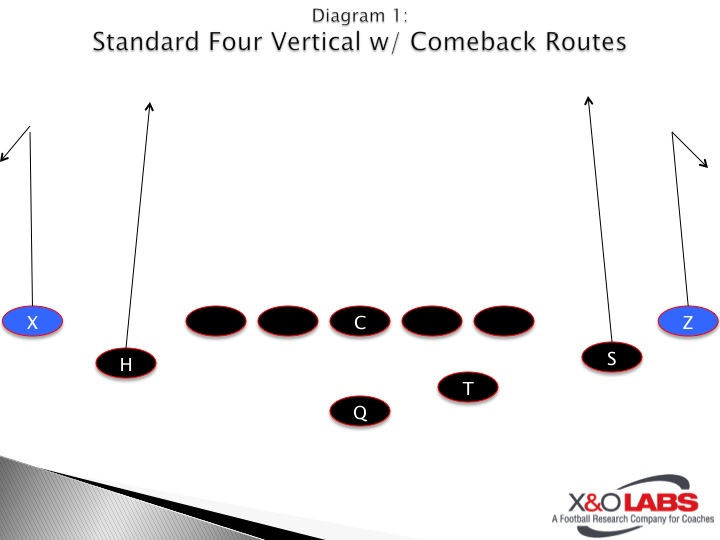 It seems that the drop out comeback could be an efficient "take what they give you" throw, particularly to the boundary where there is less room to work with.  Most coaches we spoke with wouldn’t dare throw the field side comeback (unless the QB had the arm strength to do so) but the productivity of the comeback could prove for an easy pitch and catch - so much so that Dublin Scioto High School (OH) offensive coordinator Doug Taracuk tagged his comeback route the "Winner Route."  He uses it as a pre-determined throw to the best matchup he has on the outside regardless of coverage.

But what Taracuk does, that we thought was interesting, is have the QB react to the coverage and not the receiver.  Of course, this thought process is contrary to the entire principle of the four vertical passing game that relies on receivers making post-snap reads on defenders in space.  Taracuk will tell his QB’s to throw the ball deep if coverage allows it (and the receiver has gained space on the corner) but if he hasn’t, he will instruct his QB to throw at the back of the head of the WR, similar to a Mike Leach concept, which forces the receiver to adjust and react to the throw.   The receiver will look for the ball at 17-18 yards deep and react to the throw.  "The receiver will break inside or outside based on the defensive back’s leverage," said Taracuk.  "It eliminated the QB misreading the intention of the receiver.  We used to get overthrown balls when the receiver broke and underthrown balls when he kept going vertical.  The back shoulder throw is now easy to see because the receiver reacts to the thrown ball.  Our only concern with the route is making sure the receiver is running a track which allows us to catch the thrown ball at his head."

Below is some video of Taracuk’s "Winner Concept" in action: