Beating 2 High with Inside Scissors

Here at New Mexico highlands we are a true Air Raid spread no-huddle team, very similar to Oklahoma state and West Virginia. Our pass game philosophy is to make the defense defend the whole entire field by occupying as many zones as possible. The following pass concept I would like to discuss is an inside variation of the Air Raid scissors concept. Traditional scissors puts stress on the CB and the SS by putting them in a bind with a post breaking away from the CB by the outside receiver and a corner route breaking away from the SS by the inside receiver. However, defense has made adjustments regarding the scissors concept. Usually you would get a “switch” call between the SS and the CB. What this does is allow for both players to pass off routes to one another. The SS would hold, turn his hips and run underneath the post, while the CB would fall off and wait for the corner route to come into his zone. Our inside scissors play which we call “Razor” is almost the same concept but, takes advantage of 2 hi safety teams by putting stress on the SS and middle linebacker instead of the CB.

The first thing we would like for our QB to do is take a look at the defense and determine whether the middle of the field is open or closed (2 hi, 1hi). The reason being is because there are two different progression reads based off of the defensive coverage. We are primarily a progression read team; this means we tell our quarterbacks to look at his receivers in a particular progression to determine where to throw the ball. Once the QB determines if the middle of the field is open or close he now knows what progression he is going to make.

The “Razor” concept is a great 2hi beater. This concept is very flexible and can be taught as a key read, progression read or key progression read and can beat almost any coverage a defense may throw at us. We can run this play out of multiple formations; however we were more successful out of our 3x1 and empty sets. The “Razor” concept is a corner route by #3 receiver, an inside stem post route by #2 receiver followed by a under route by #1 receiver. This automatically puts stress on the SS because he has 2 verticals coming at him from the slot position and he has to choose one. The MLB is also in a bind because he has a under route underneath him and a post route in the hole behind him.     In addition, we want the inside stem because we want the SS to be in a bind with 2 verticals coming right at him. Also the inside stem gets the receiver a good angle to the middle post and gets him there faster.

(Z / #1 Receiver) = 3 step under. Outside foot back, burst out and on third step plant foot in the ground and stay flat at 5 yards across Mike’s face.

(H / #2 Receiver) = 7 step inside stem post. We tell this player it is very important to get a very good inside stem behind the Y. This player needs to be right behind the Y before he makes his break to the post.

(Y / #3 Receiver) = 6 step Corner route. Y needs to always be lined up on the ball. It is very important that we get a good release from this position and get vertical to get the attention of the play side safety. WE CAN NOT GET JAMMED. It will throw the timing of the play off.

(X / Single Receiver) = Inside stem Shake route. The land mark for the inside stem is 7 yards up field and 2 yards away from hash. We tell this player to really get vertical to get that backside safety attention.

(T) = Check Flat. Always line up away from the trips side and block inside out if there is pressure. If there is no pressure we tell this player to release to the flat. We also motion this player out of the backfield and run smash concept backside.

(QB) = QB comes to the line and see MOFO and knows automatically that his pre progression read is Under (1) Post(2) Corner(3) Backside shake(4). We tell our QB we want to hit the post so if the mike even hesitates on the under throw the post behind him. 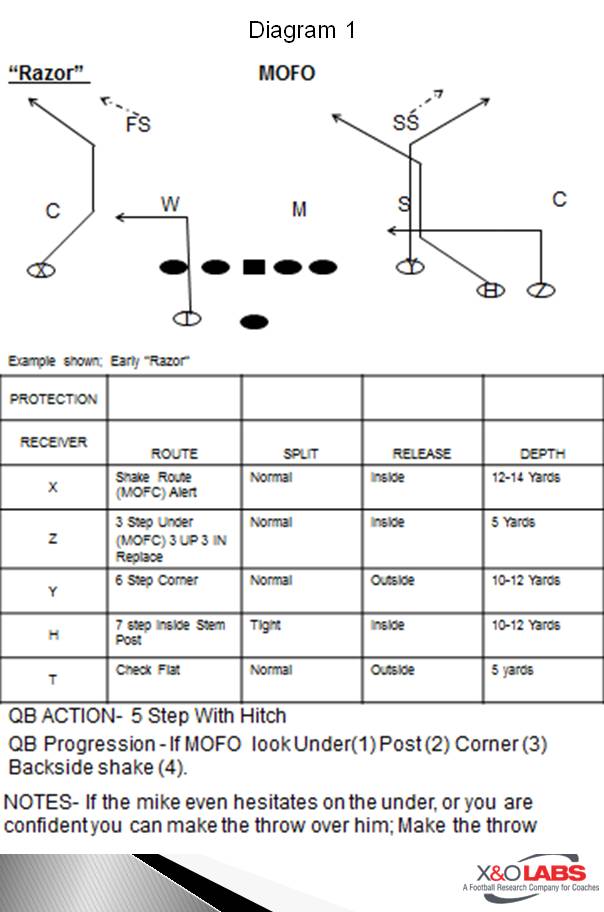 (Z / #1 Receiver) = 3 steps up 3 steps in Replace route. Outside foot back, burst out and on third step plant your foot in the ground and stay flat for 3 more steps and stop. We tell this player we want him to get the attention of the SS and the corner. Try to sit in the hole between the two.

(H / #2 Receiver) = 7 step inside stem post. We tell this player it is very important to get a very good inside stem behind the Y. This player needs to be right behind the Y before he makes his break to the post.