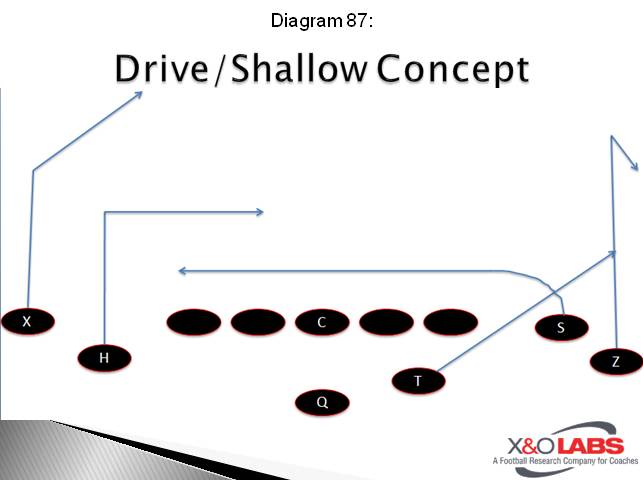 The Shallow Drive concept, which is firmly entrenched in the Bill Walsh West Coast offense vernacular, is meant to produce a high-low stretch on the play side inside linebacker by presenting him with an under route (shallow) and an over route (dig). It’s what most coaches refer to as the “triangle read”, which will be detailed below.

We found that many coaches were adamant about utilizing the Shallow/Dig out of balanced sets, rather than the trips sets as the Snag is most frequented out of. The majority of coaches, 64 percent, choose to run the Shallow/Drive out of 2x2 opens sets. 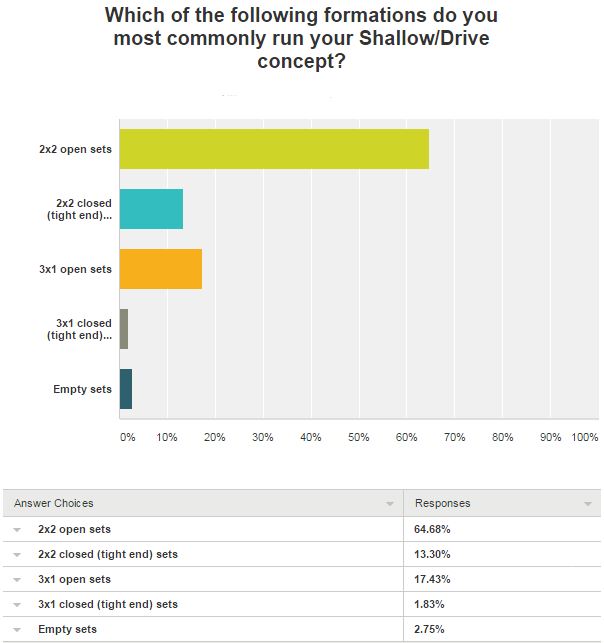 In its base, the route structure to the play side of the Shallow/Drive consists of the following:

We asked coaches which particular route has been the most efficient using the snag and here is what they told us:

Now, this is purely the base route structure of the concept. In case two, we are going to present our data on the various route progressions and adjustments:

The beauty of the Shallow concept is that it has a built-in man beater (drag), zone beater (dig) and an over-rotated coverage beater (post). So the pre-snap read is usually just identifying which of the aforementioned structures you’re getting, which triggers the quarterback where to throw the ball. We did find that many coaches were still teaching the “M.F.O. vs. M.F.C. principle” to take a deep shot of the post against structures that allowed it. We included some samplings of coaches responses on what they tell their quarterback pre-snap:

Nate Knight, Faith Lutheran High School (NV): “Our quarterback identifies the number of safeties then the depth of the corners. If it's cover two, he knows the Dig will be his primary. If it's single-high he will look to the leverage of the safety against the Post.”

Matt Puffenberger, Berkeley Springs High School (WV): “We identify middle of field open or closed. Closed will likely eliminate the post, so we expect to throw the drive. If we see middle of the field open, we’re looking for the post first. Then we identify the MLB, which is our movement key.”

Jason Farias, Cottbus Crayfirsh (MA): “We look for availability of the post route in 3x1 sets.”

Preston Troyer, Tonganoxie High School (KS): “All we care about pre-snap is the post route. We are looking for the corners alignment and if there is a safety capping (over the top of it).”

Bruce Miller, Gainesville High School (GA): “We look for the depth of linebackers and if there is one safety or two safeties.”

Kevin Ross, Van Buren High School (AR): “We will pre-snap glance at the Post route. One thing the defense does is to jump the Dig with the safety. If we see this and or we see the safeties aligned at 8 to 10 yards we will throw post.”

Shawn Liotta, Clairton High School (PA): “The quarterback will look pre-snap at vertical (peek post). Against edge pressure he knows he has the running back out of the backfield and the shallow which is hot.”