Our quick game concepts at Cushing are something that has been developed over the last 10 years.  With the help of many coaches over those ten years, we have developed a concept that we feel is effective going on a week-to-week basis. Much like every other OC I've ever heard speak, I have taken most of these concepts from other coaches or programs to fit our needs. One thing that I feel might make our quick game system different from other programs is our “double call” system. We double call our quick game passing; this means we are calling a concept on one side of the offense and another on the other side. Before I became an OC, I came from a system that mirrored quick game on both sides. This was effective but breaking down postseason film we saw situations where if we ran a different concept to the left (or boundary/field) it might be more successful. The overall philosophy of our quick game concept is to give us the best chance to be successful in every play. By double calling our quick game, allows us to attack a defense with different concepts. It also allows us to be extremely creative when making calls.

First we teach our double calls system, we teach the receivers that we call the concepts left to right (like reading a book). For example, a basic call might be Rip 50 Fade-Stick. The receivers on the left know they are running the “Fade” concept (fade/out) and the receivers on the right know they are running the “Stick” concept (Fade/Stick). We teach all our pass game as “concept” bases. All quick game concepts have one-word names, This means all receivers learn what to do based on the one-word route called to their side. 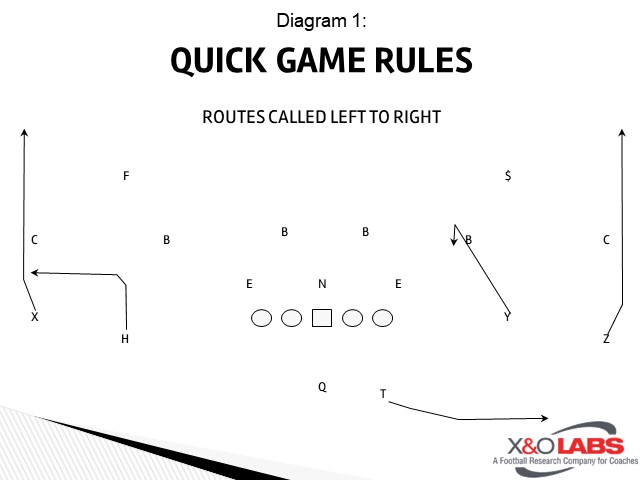 In diagram one, this is one of our basic double calls. We are calling the Fade concept to the left and our Stick concept to the right. In all of our quick game concepts, the TB is in the routes, usually and the flat route to one side. 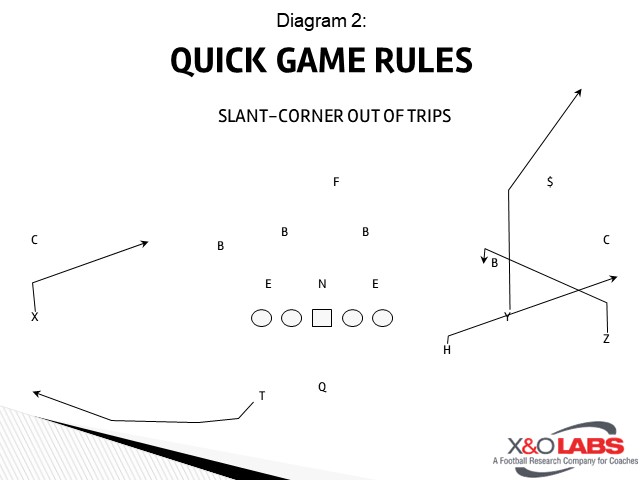 In diagram 2 we are running a quick game concept out of a trips formation. Again, left to right, running Slant to the left and our Corner concept to the right.

We go into every season with our basic quick game routes. These are routes that everybody has in their playbook, Fade, Slant, Hitch, Stick, Spacing, and Corner. We start running these concepts with the players as early as 7th grade. Again, they all learn the rules of the routes based on the name of the route. Some rules change the routes when concepts are run from trips sets vs. 2 x 2 sets.

Within our quick game concepts we have built-in some amazingly effective shot plays. A lot of coaches like to take those shot plays out of drop-back max protection formation, allowing for deeper routes. But we feel that we have a better opportunity to get the ball out quickly and attack a defense with quick shots and double moves. We create most of our quick game shot plays off concepts we already use in the quick game, we might just add a double move or wrinkle that makes the routes different. 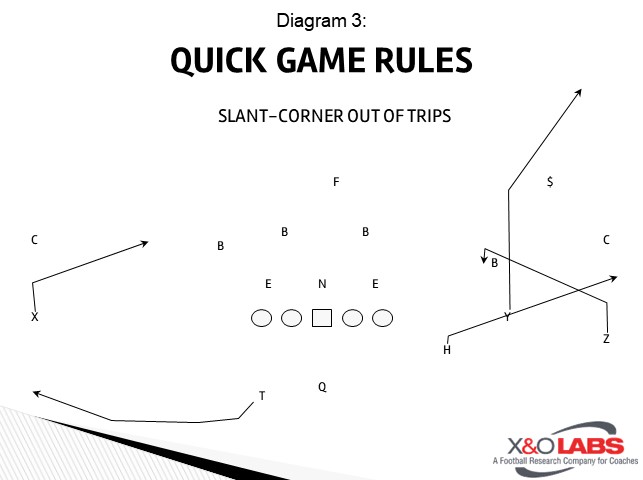