This was the first time as an offensive staff we saw a defensive with a “3-high” robber look, and what made it even more exotic was how far the rovers were playing inside the outside receivers.  Once we dug into the film breakdown of the opponent we were facing, we thought that there was potential with a few concepts.  Deep outs to our outside receivers, vertical routes out of empty, and RPO’s out of 2x2. 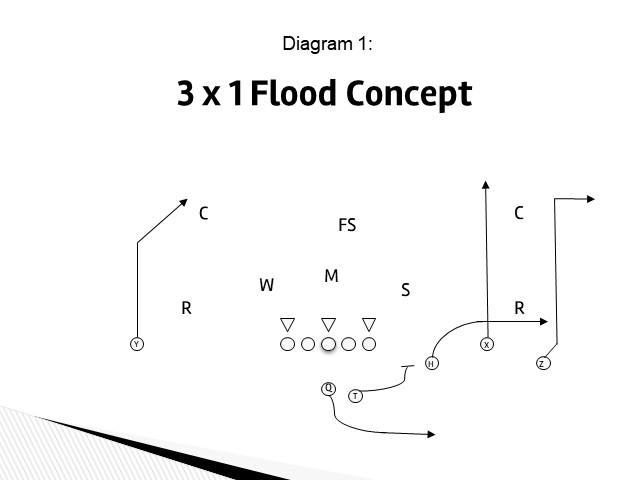 In our flood concept, we will always have a receiver occupying the flat, a deep out, and a vertical.  We can tag whom we want to run what route based on what we see on film.  Here we have our H running a 3-5-yard speed out, knowing that the rover will sink and trap as he is reading 2 to 3.  The X receiver is running a vertical route to hold the free safety as he is reading 3 to 2 and has to carry 2, vertical.  Our Z receiver is running a deep out and breaking it off at 15 yards, the corner has 1 vertical.  Our tailback will set the edge to the side that we are sprinting to.  We tell the Quarterback to “take a peek” at the vertical route, then read the flat defender.  If the flat defender sinks under the deep out, throw the speed out.  If the flat defender traps the speed out throw the deep out. 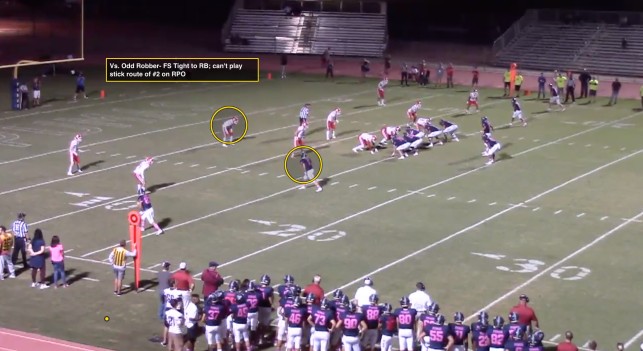