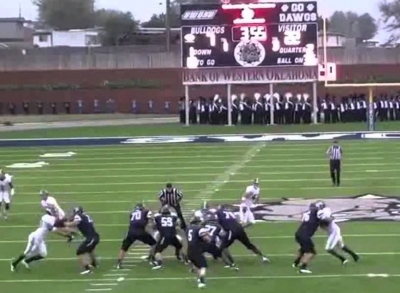 One of the favorite things for coaches to do in the off-season is to draw up new plays, especially pass routes. Whether it is through self-scouts, stealing from opponents, clinics, staff visits, and simply having more time on their hands than usual, this is the time of year that coaches have the urge to add to their playbooks. Our philosophy here at SWOSU is to keep things as simple as possible so that our players can “play fast” and not worry about memorizing too many techniques and assignments. By limiting the number of schemes we have, we are able to really work on perfecting our techniques and get really good at a few things instead of being average at a lot of things.

For that reason, we like to go back to the basics and look at what we can do to correct problem areas in our blocks. In my previous article, I discussed how we problem solve concepts in the Inside Zone. This time, we are going to dive into how we address pass protection technique errors. He sections below will cover how we address issues with stance, alignment, kick sets, post step footwork, and punches.

I have found over the years that over half of the technique issues that you run into can be solved, at least partially, by getting into a better stance. It is easy for a coach to get so caught up in scheme and assignments that we forget to continue to teach proper stances. While size has an effect on stance, there are a few things we teach that are non-negotiable. They are as follows:

Here are some common stance errors and solutions:

Error #1: Using a false step or not gaining width on the first step.

Solution #1: It is important that the player put the majority of their weight opposite the foot that they are stepping with. For example, if a right tackle was going to kick set to his outside, he needs to put most of his weight on the left foot so that his right foot can gain width and depth with the first step.

Solution #2: Many times, issues with pad level begin with the stance. If the player’s glutes are too high in the stance, the player becomes a waist bender instead of a knee bender after the snap. Simply getting the player to drop his butt down in the stance loads the leg muscles and lowers the player’s center of gravity to help them get their pads down.

Error #3: Poor alignment or spacing based on the concept.

Here at SWOSU, we want our players as far off the ball as legally possible. I tell my players if we don’t get warned about being too deep in our alignment at least once per game, then we are not doing our job! This is common for teams that run a lot of zone schemes and/or throw the ball a lot. Teams that run more gap schemes or the wing-t are more apt to crowd the ball. Other coaches will change their alignment based on the play call. Our guards set the depth and we tell our tackles to line up their inside foot on the inside foot of the guard so we don’t get a “flying V” look. It is important to note that if you are a team that uses two-point stances, you must lean forward in your stance so that your helmet breaks the center’s belt line.