If you are a turn protection (half-man, half-slide) team like we are here at Fort Hays State, the number one job of your o-line coach is to figure out which way you want to slide your protection each week. The purpose of this article is to give you a few ideas that will help you make this determination without confusing your players.

What Is Turn Protection?

In the simplest terms, turn protection is a half-man, half-slide protection with the center, playside guard, and playside tackle responsible for a gap; and the backside guard and tackle manned up on a defensive lineman. (See Examples in Diagram 1, 2, and 3). 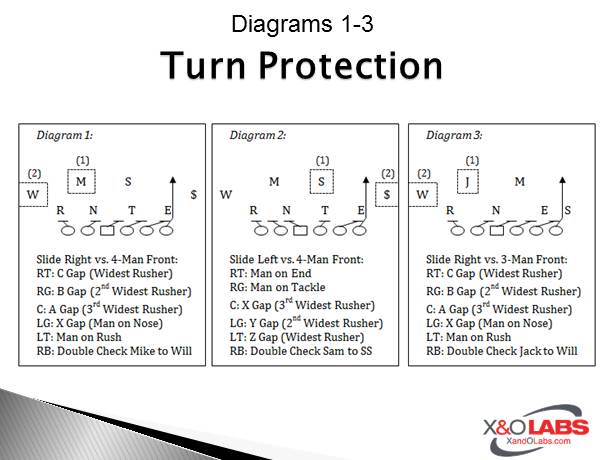 Who Calls the Protection

Sideline – In some systems, the play-caller will determine the slide side of a protection. Some coaches are more comfortable playing the percentages based on film study to determine what a defense is going to do (which are detailed below) and call the protection in the play call. An obvious disadvantage to this is you do not get a chance to see the defense’s pre-snap alignment before determining the slide.

With no-huddle teams, oftentimes the o-line coach or running back coach will signal to the o-line or quarterback the protection call at the line of scrimmage. This gives the coach a chance to see pre-snap alignment, but adds a layer of communication to the process and slows the offense’s tempo down.

Quarterback – The best reason to give the slide responsibility to the quarterback is that he is the one who is going to pay the price if he sends the slide the wrong way. After he is hit by a free blitzer once or twice, they usually realize the importance of getting the protection correct. Another reason is that the QB has the best pre-snap view of the defense. One reason not to use your QB is that they already have enough on their plate in terms of reading coverages, making route adjustments, and other audibles that you don’t want them to be overwhelmed. This is especially true with an inexperienced QB. Sometimes taking some responsibility off their shoulders can help them be successful.

Center (or Guard) – In our system, our center calls out the defensive front every play. Against some opponents, he will also ID the Mike linebacker. Since he is the one that has to know what front we are facing, it makes sense that he be the one to call out the protection as well. However, there have been times when we have had a guard call the protection instead. For instance, if you have a three-year starter at left guard and a redshirt freshman center, then the left guard is going to handle things better than the center is. We have never had a tackle call out the protection simply because his angle is so much different that he can’t recognize what is happening on the other side of the line.

At the end of the day, any of these approaches can be successful. We have always designated either the quarterback or one of our interior o-linemen as the player to check protections. As the o-line coach, I prefer that it be one of our guys up front, but we will sit down as a staff before every season and evaluate that group of players before we make a decision as to who will have the responsibility of calling the protection. It is important to note that you need to call a slide every play (even on running plays or non-turn protection plays) so that the defense doesn’t have an extremely easy clue as to when you are passing the ball.

One of the reasons we use turn protection is because we can incorporate five, six, and seven-man protections with the same rules for the offensive line. We can also run three-step, five-step, seven-step and even some play action concepts while using the same basic principles of protection. The less your guys up front have to think, the more aggressive and confident they will play. The QB and running backs are the ones that adjust.

One thing that is extremely important, for shotgun teams especially. Do not always align your back to the man side of your protection pre-snap. The first thing most defensive coaches will look for when attacking protections is any pre-snap giveaway to which side you are sliding your protection. Realize that they watch film just as much as you do and if you align the back to the man side all the time, you are going to see every blitz ever invented to that side on a weekly basis. Going under center or in the pistol eliminates this issue. But so does simply having the back cross the QB’s face post-snap (with or without a flash fake).