Four verticals is one of the oldest, and most time-trusted pass concepts in football. In our offense, as well as most others across the country I’m sure, it is a day one install concept. Like most staple plays, it allows for great variation across most any formation and opens options for creative play designers to layer different receivers in the landmarks spread across the field. At RMU, it is also a major point of emphasis in our play-action game from week to week. As we build our plan in the run game we always keep an eye on what defenders will be activated in run the respective run fits and how, if possible, we can take advantage of empty field space created down the field w vertical variations. These plays are low-cost concepts for us as they have great carryover for the QB’s and receivers from the initial install of the drop-back pass play. Incorporating the play-action versions allow the ball to come out even quicker in the seams because of the initial step to fit of the LB’s. Pass rush can be influenced thanks to the different protection schemes (run looks) we use and allow us to hopefully get the ball out quick while defensive linemen are still beginning to alert themselves into a pass rush transition.

Use of Jet sweeps in some form or fashion are a possibility for us in any game as an option to fill our perimeter run plan. One of our first versions of PAP verticals comes off this action. 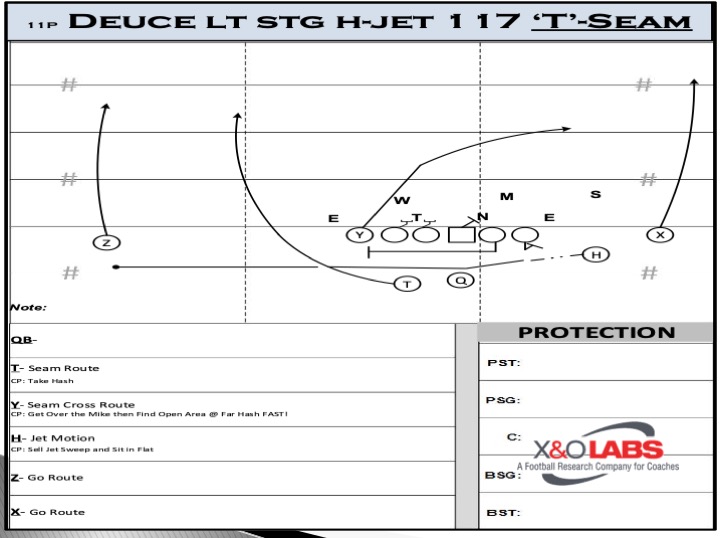 This is a 5-man protection with a slightly moving pocket as the QB will set up in approximately the pre-snap B gap area after shuffling with the mesh of the WR. The action we are selling in this instance is our power read play to the jet sweep. The front-side tackle is responsible for the B gap and wants to sell the “deuce” combo for the first 3 steps before gearing down and transitioning into a pass pro mirror technique. Once the ball is snapped, he must keep his eyes in his gap and if there is no immediate threat (3-tech) he should leave an inside drag arm and look for any work coming to fill his gap. A pre-snap coaching point is that the tackle be alert to any potential edge pressure showing off the front side. If needed he can make a call to alert the front side of the OL and the pulling guard of the possibility of pressure. In this case the guard and tackle should emphasize staying square to collect any inside movement of the DL and freeing up the pulling guard to connect w the blitzer.