The Hunt Route in the Shallow Cross Concept

Shallow is one of our bread-and-butter pass game concepts and a day one install for us here at Perryville High School.  Offensively, we practice and plan like an Air Raid program and believe that Shallow (91) – an Air Raid staple – is one of the most efficient concepts available in the passing game. You provide a simple read for your quarterback, three underneath options to get the ball to, and have a chance to put it in the hands of a fast kid in space.

While I still glean a tremendous amount of information from Coach Leach, Coach Riley, Coach Hatcher, and other Air Raid guys at the collegiate level, we do have some stark differences offensively. Foremost, we choose not to install traditional mesh (92). I find it too expensive, whereas Shallow gives some of the same benefits with a much “cheaper” installation. Breaking from the traditional Air Raid rules for 91, we also utilize some different route rules that we believe have made this an even easier read for our QBs. 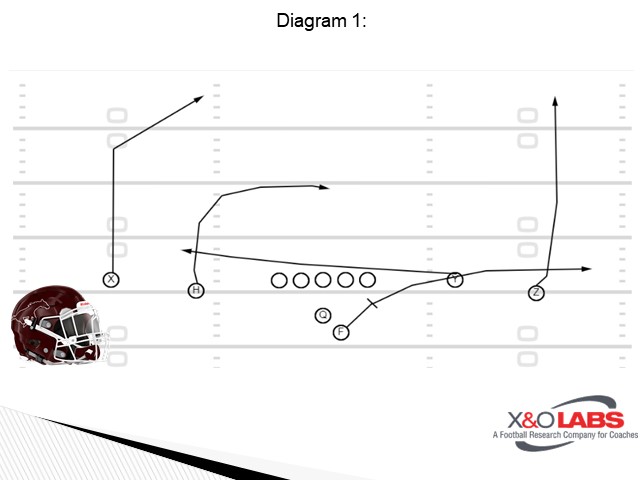 In the diagram above, we have Y Shallow called from an open 2x2 look. We are a concept-based team offensively and work extremely hard to teach the rules of each concept and how they fit together – allowing us to get creative formation-wise once those rules have been taught and grasped. We will build on some of these additional formations soon.

As above, we’ve tagged the Y on the Shallow cross. Our coaching point with the crosser is to take the easiest available release, replace the heels of the defensive line and run like his hair is on fire and his butt is catching. One of the issues you run into installing Shallow is the crosser’s hesitance in the middle of the field as they are concerned about LBs aggressively collisioning them. That is why it is critical to sprint the Shallow – it’s much more difficult to hit a moving target. Further, as we install the concept, we work to make a point that if the LB collisions the Shallow aggressively, chances are high that we can fit the Hunt route in behind them, as you can see below. 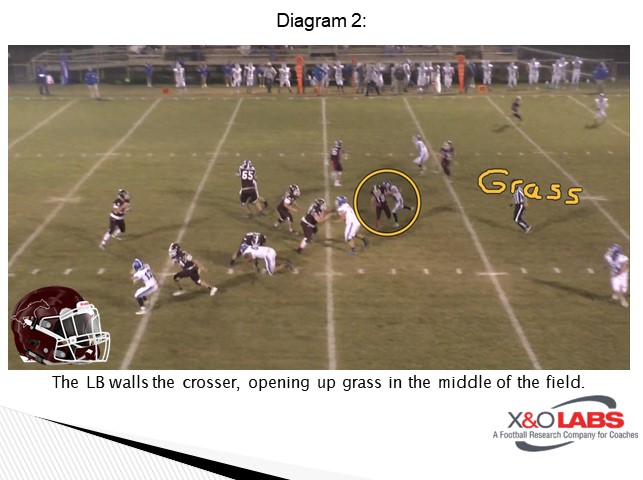 We utilize the Hunt route differently than a traditional dig when we call Shallow. I stole this idea from a friend of mine in the profession and think as he did, that it helps the concept time up better in the middle of the field. Our rules on the Hunt are simple - take an outside release on the head-up or inside-most defender to keep the crosser from flashing their eyes and “banana” the route into the middle of the field working to find grass 7 to 10 yards over the ball vs. zone. The receiver does not necessarily have to stay outside the defender - we just look to force him to open away from the crosser. There is no stick and break as you’d typically see with a dig. In the event we get man coverage, we tell the Hunt to continue running to the opposite sideline. We ID man coverage simply - if the Hunt sees someone chasing the crosser, it's man, so keep running.

Our outside WR to the Shallow side will run a MOR (mandatory outside release) route. He is trying to take the top off and clear out room in the middle of the field for the Hunt or Post. His responsibility is to get vertical as quickly as possible.

To the Hunt side, the outside receiver is running a Post at 10 yards. This route creates levels in the middle of the field - the crosser underneath, the Hunt at LB level, and the Post over to the top to hold safeties.

Our running back has a check release shoot route to the Shallow side, so in the diagram above, the Y is running the Shallow therefore the RB is running his shoot to the right side. First, we must follow our pass pro rules, if pressure presents itself the RB must stay in to protect. If his blitz responsibility drops, we get into our route. The rules we use for the shoot are simple - work one yard past the line of scrimmage toward the sideline getting width fast. We want to force the opposition to defend the flat.