Stretching the Boundary with the “Slash” Concept

In 2010, we included the use of a TE in our spread offense, and adapted more of a pro style run game and approach to our offensive attack. We still maintain many of the principles we learned when executing a spread offense, but our personnel and philosophy dictated a different approach, which gave us more flexibility in developing our attack from year to year with different types of personnel. While evolving as an offense, we looked for components that allow us to maintain a multiple attack without relying purely on spread formations. Using personnel and formations we expand and contract to put stress on how defenses must play us.

One of our favorite formations was a 2x2 with a TE into the boundary, which gave us a strong running attack, and still allowed us to spread the field (diagram 1). 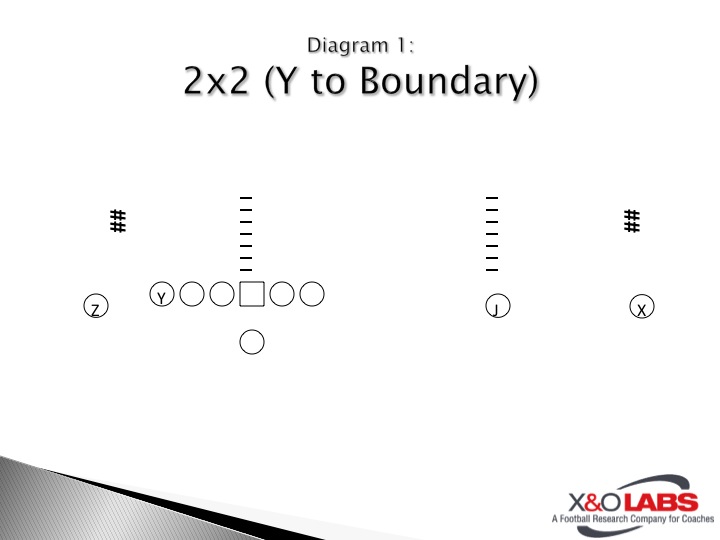 However, we had only a few answers in the passing game that we felt allowed us a high percentage passing attack to the boundary- and those answers didn’t have the simplest progression for the QB to work to the field to find open receivers when the defense took away the boundary side routes.

In doing research and looking for different answers for our offense, we were directed to Dub Maddox, an assistant coach at Jenks High School (OK) who had been developing an idea on how to attack the boundary. Meeting with Dub allowed the two of us to collaborate on some of the ideas we each had and fit the concept- particularly the component that attacks the boundary. We felt that the concept overlaid well with some of what we were doing in our four verticals package, and from a teaching perspective much of what was needed in the package was already taught to our receivers and quarterback.

The "Slash" concept. "Slash" attacks the boundary on quick rhythm with a hitch executed at 7 yards deep and 1 yard from the sideline, and a route we call "Bow" for the TE which is an angled seam route that aims for 15 yards deep and 5 yards from the sideline. This combination is where the quarterback will start his progression. We label this combination as "Bow" which from a structural standpoint allows us to incorporate this with different field combinations as we progress through the season and add a wrinkle to our offense (diagram 2). 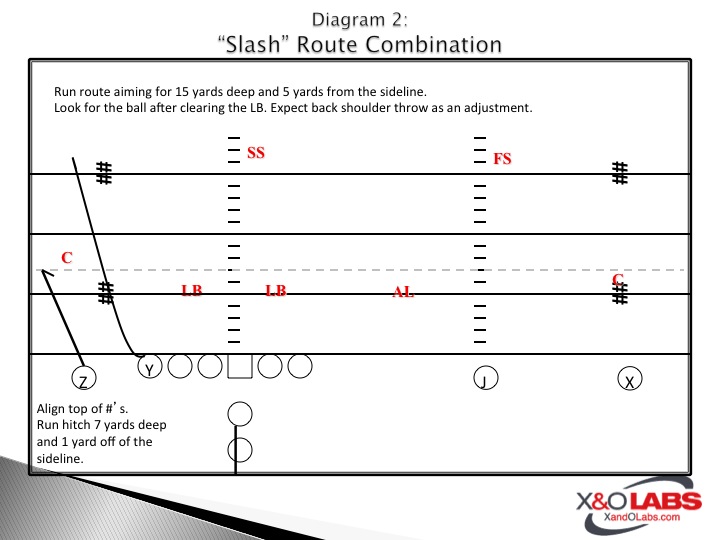