Most coaches understand that the passing game is built off progressions. Quarterbacks have first looks, progress to second looks then maybe a third look, and the ball is either thrown or he's off and running. But many coaches make the mistake of producing separate progressions for each concept which can become confusing for the quarterback, ultimately delaying his release and putting him on the ground quickly. At Henderson State University (AR), under the direction of offensive coordinator Hayden Hawk, the offensive staff has formatted the entire pass game into six distinct “buckets” which aid in speeding up the quarterback’s progression and timing:

“The defense can do whatever it wants, but essentially it’s 1, 2, 3 for the quarterback,” he told me. “The details on these read progression is addressed below but the benefit of this teaching progressions provides for simple tweaks, or tags, each week in-season to manipulate defensive scheme or personnel.”

In this report, we will focus purely on how Coach Hawk and the staff at Henderson State format its Drive and shallow concepts into talking points for the quarterback to help speed up his progression and efficiency. 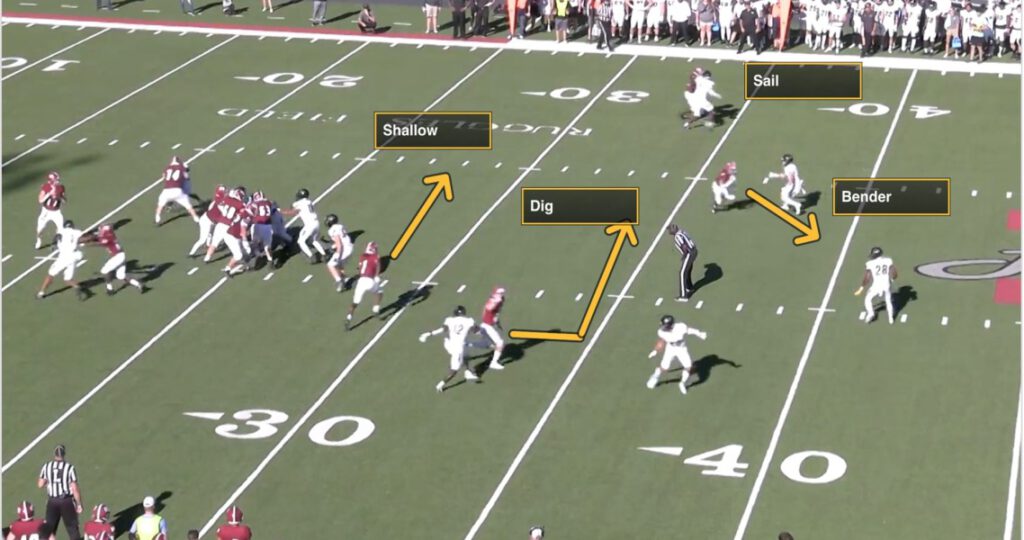 Henderson State formats its concepts by using concept name. In the shallow and drive series, the first word is the actual concept while the second word is the tag. For example, “Drive, Sail” would be one concept while “Mesh, Return” could be another. In total, there are six different concepts (these include tags) in the shallow/mesh family which are included further in the report. When these concepts are mixed with a variety of personnel groupings and formations it becomes difficult for defenses to prepare for. “We don’t repeat a play for three games,” said Coach Hawk. “So, when a defense breaks us down, it will look a lot but we run the same concepts.”

How Coach Hawk and his staff build in his tags is by devising a worksheet template each game week. This template is later generated into a call sheet. That worksheet contains the following:

The drop-back menu will consist of two vertical routes, two climb routes, three shallow routes, and two high-low concept routes. The staff just decides on how many of each concept they want, based on what they are seeing. The frontside of the concept will attack whatever coverage the defense is presenting that week and is the quarterback's first progression. "If it’s a Cover 2 defense, we will try fit in a bender underneath the safety,” he said. “If it's a quarters defense, we think about getting them on an out and up on the Nickel. Things like that. That limits us so we don't endlessly come up with plays and allows us to focus on specific concepts when watching the opponent. We package our concepts with what the quarterback feels good about throwing where your first and second read should be our top two receivers. Throughout the week it’s building it to match that together.”

An example of these tag packages comes in the form of what Coach Hawk calls his "locked open" progression. These are front-side tags that never change. And one of the most efficient locked open routes last season has been the field out by the number one receiver, who happened to be a two-time All-American for the Reddies. Rather than number two running the out (or sail) as most offenses do, number one would run a 10-yard out (six steps) from a choke split (+2 from the hash) alignment to the field. This is contrary to a number two receiver running the route, which would be a 12-yard cut. 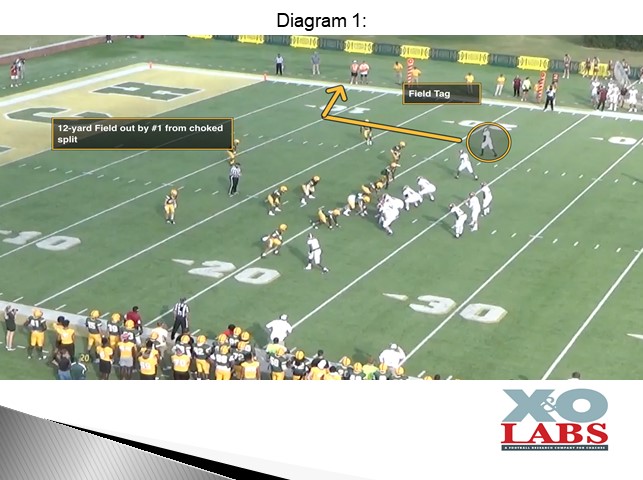