Beating the Blitz With the Shallow Cross

Beating the blitz doesn’t have to be difficult. We have found that the shallow cross concept is a simple and flexible concept that is great versus the blitz and on any normal down and distance. In our six years running this concept, it has been the most efficient play for us and this article will help you understand why.  Additionally, it has proven to be very productive. 1 out of every 7 times we ran this concept this past year it resulted in an explosive catch over 16 yards.

The shallow cross is the first drop back pass we install each year. We can tag the concept to be into the boundary or to the field. We also will tag different concepts on the backside to help defeat the blitz.

This concept starts with a 5-man protection with a free release from the running back. We have used this concept with 6-man pass protection and just felt we gained more by putting the running back out in the pass concept. We mainly utilize half-man, half-slide protection here at Glenn High School. It is easier for our players to execute and understand and gives us the ability to slide to dominant defensive lineman or to cover up a young and inexperienced offensive lineman that may need help. We determine the slide side with the call.

Our rules for Scat Protection are:

Center: A Gap Defender, unless defender slants to the backside. The center is the fulcrum point and can teeter to the slide side or the man side.

Guard: #1 down linemen from head up on the center out

Tackle: #2 down linemen from head up on the center out 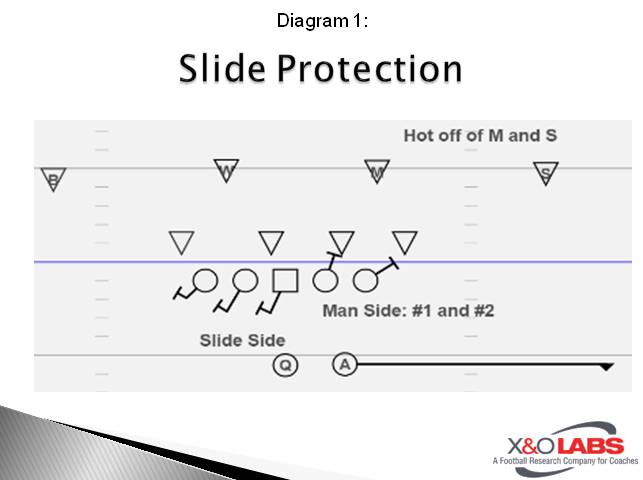 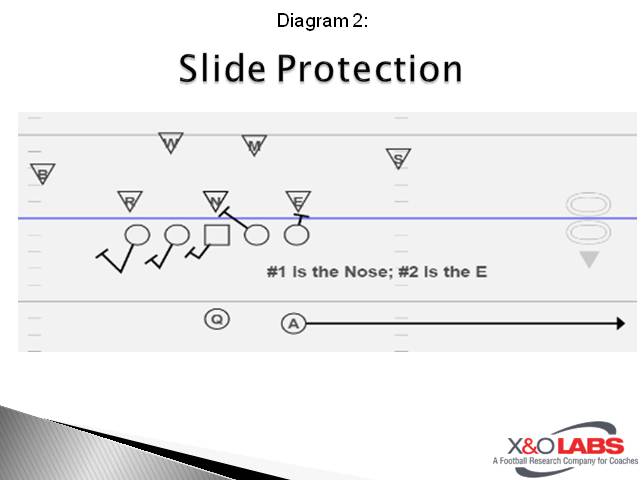 In figure 2, the protection is drawn up versus a 3-4 defense. The man side’s #1 is the Nose and the #2 is the Defensive End. If the nose goes into the slide side’s A-gap, then the guard sinks and looks to help with a possible linebacker blitz or some type of twist game. We tell him to sink so he does not pick off any other offensive lineman and to be able to see any type of delayed blitz.

We will free release the back to the man side of the pass protection. You can get creative here and use motion to release the back early or slide to the same side the back is releasing. These can change up depending on tendencies and “window washing” for the offense.

We are a concept based offense. This means we tag names to the concepts and a single name can tell everyone on the field what to do. This makes signaling easy and efficient for our players and coaches. A single word can tell the pass protection, the frontside routes, backside routes, and the progression for the quarterback.  We play an up-tempo style of offense and look to simplify the offense every year. Our off-season evaluations of the offense are currently being done by the offensive staff and we are looking for simple adjustments to make plays more efficient and successful and concepts we need to subtract or add to the offense to help benefit the team.

The routes on the call side are from the most outside receiver to the innermost receiver:

The routes on the backside are: 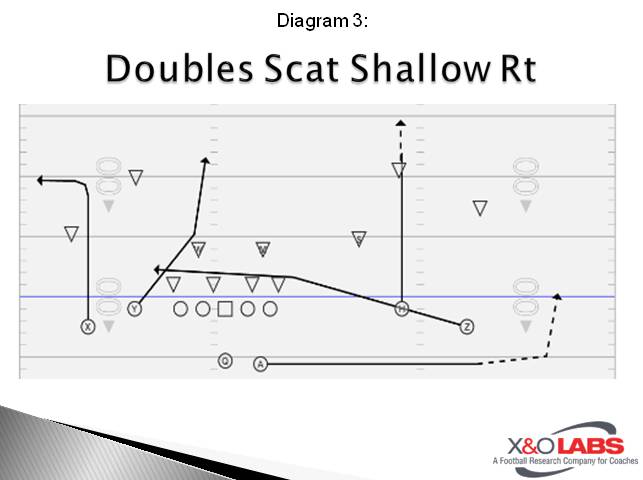 The shallow route aims at the heels of the defensive lineman and continues to fun full speed over the ball. We do not tell the shallow to find a void and sit in this concept. We want the receiver to be full speed running to the sideline if we deliver the ball to him. The yardage on this route is outside, up the sideline. If the receiver turns up in the middle of the field, there is not much room for yardage after the catch. He must outrun everyone to the sideline and get his large yards after the catch near the sideline.