Applying the Shallow Cross in Any Offense 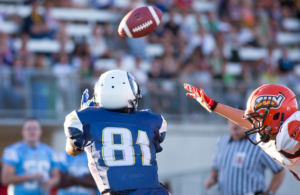 Editor's Note:  Coach Klyne shares how he applies the common shallow cross concept at multiple levels of play in Canadian, 12 man football.  The same concepts apply well within the 11 man game played in the states.

You do not have to be an Air-raid purist to believe that the shallow cross is a staple in modern football. The logic is easy; your primary target is little more than 4 yards downfield, 12 yards away from your Quarterback and has virtually no one around him. This makes it a plausible dropback pass for nearly every level of passer. However the details of the play are often glossed over and, like many clinics or articles, offer the play versus ideal situations. Unfortunately if a play is successful for you, defenses will very quickly find ways to put you in ‘less-than-ideal’ circumstances. What I would like to introduce is the shallow cross run against defenses that have prepared to stop it.

The first problem with the shallow cross (SC) is that you always seen it drawn up against 2 safety defenses. The logic behind the play is simple then, in a 2-safety defense, you have only the Mac Linebacker in the box to defend the Shallow. However, more and more teams are reverting back to single safety defenses, in order to be more gap-sound and blitz-heavy. The first problem we see against a single safety is that we now have 2 linebackers (Mac and Sam). We also have to account for the weakside flat defender (Will LB). 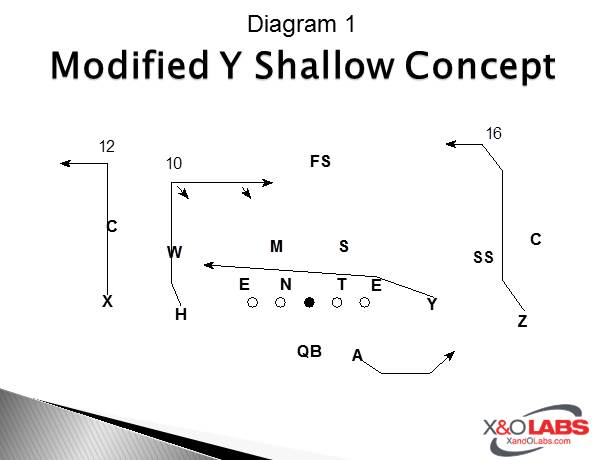 What we immediately notice against in diagram 1 is that we have possibly 3 defenders (Sam, Mac, Will) all capable of defending our 2 primary routes (Shallow/Hunt). What we must first understand is that against this type of defense, we must isolate just the weakside of the field first. The Y receiver must understand that he is getting to the far side flats at all costs. Him and the X will stretch the weak fFlats.