Installing the Choice Package in the Pass Game

In the Run and Shoot one of the first things we try to establish is the threat of the QB rolling and throwing to the field. At the high school level, this is a great way to put your playmakers in space. However, defensive coaches soon realize what you are doing and commit defenders to the field. The "Run and Shoot's" answer to that is to be able to throw to the boundary.

One of the first package of routes we put in to accomplish this is the "Choice Package." In the traditional Run and Shoot, this would come from a 3x1 formation with the single receiver to the boundary. (Our "Choice Package" also gives us the ability to run it from a balanced set as well as putting the single receiver to the field.) As the name of the package intimates, we give the single receiver a "choice" of routes to run based on the coverage/leverage of the cornerback. Properly read by the WR and the QB, it puts us in the correct play without having to check to another set of routes. The backside or three receiver side will also have its own set of reads.

Off coverage to us is defined as more than six yards cushion. When we get off coverage, we instruct the receiver to run a seven-step stem at the leverage of the cornerback. (If the cornerback has inside leverage, we want to run a stem that has a slight inside angle. The same would be true if we see head up to outside leverage. His stem will have a slight outside angle.) We do this to create more space for the route we are going to run. The seven-step stem ran at full speed will put the receiver around 9-12 yards deep.

For a CB that is off and has inside leverage with two safeties, the WR will run a “speed cut out” on his seventh step. (We do not want him to drop his hips or chop his feet.) This is done to maximize the timing of the route with the QB and take advantage of the spacing created. The quarterback seeing the inside leverage will also know the WR is running an out and will throw the ball at the top of his drop. The ball should be on the way when the receiver comes out of his break. (We execute this in practice and in our warm-ups enough that the QB and WR get a feel for the timing.) 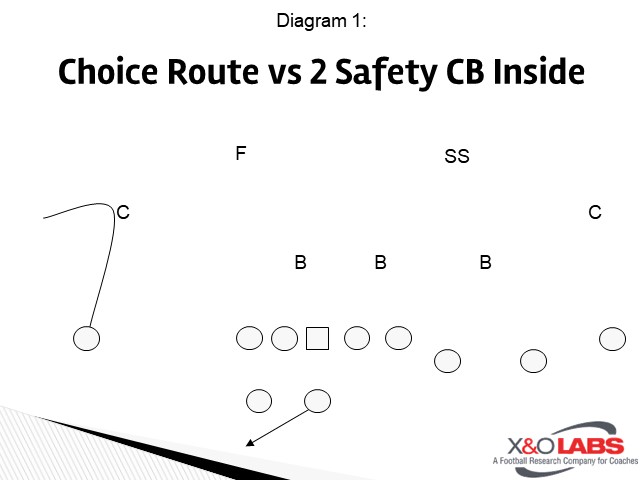 If the QB and WR see the cornerback is in an off—head up or outside position with two safeties, we are now thinking skinny post. We will attack the CB with the same seven-step stem with a slight outside angle. On his seventh step, if the CB is still head up to outside, he will now break off his outside foot and get inside leverage on the CB. This is not a dramatic break to the middle of the field. We want the WR to get inside position and never cross the hash mark. (As a coaching point, the WR must feel comfortable with a defender running on his hip. Some WRs will run away from the defender putting them in closer proximity to the safety.) The farther he can stay away from the hash, the more room the QB has to place the ball. 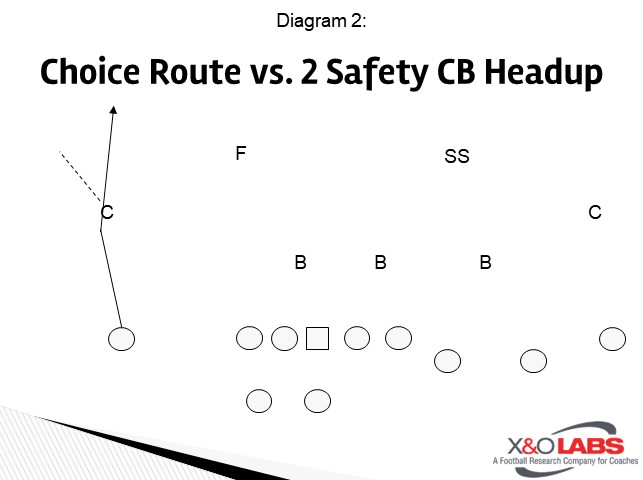