Route Variants in the Boot and Naked Pass Game 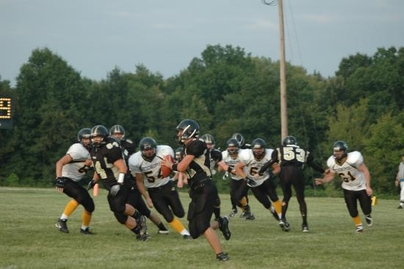 Perhaps there is no other topic more universal than the Naked or Boot pass game. Regardless of the offensive system you run, chances are you have some form of Naked, Boot or Waggle action off of your most productive run schemes. This could be the reason why we had so many coaches respond to our survey on this topic.  Below we present our findings on this concept- focusing mainly on different kinds of pass routes that can be employed with this scheme. But before we get into the specifics, there are a few items of research we’d like to share:

Editor’s Note: While we realize that many coaches classify Boot and Naked concepts into two different plays, we asked our readers to select their most productive scheme between the two and elaborate on it.

Because the Naked or Boot scheme can be used off of various run actions, we figured we wanted to present our results on which run actions were most favorable (based on our readers) to use the boot action off of it:

* For the purpose of this report, "back side" refers to the offensive line AWAY from the run action- which is the side TO the boot action.

We all know that nothing works in the pass game without the proper protection, so we’d figured that would be a good place to start our report. It’s important to note that we decided to combine both the Naked and Boot concept for the purpose of this report because they can be so similar in nature in terms of the route progression. But, we did find that the protection in these two concepts could be totally different and in fact where split down the middle in our research. Here is what we found: 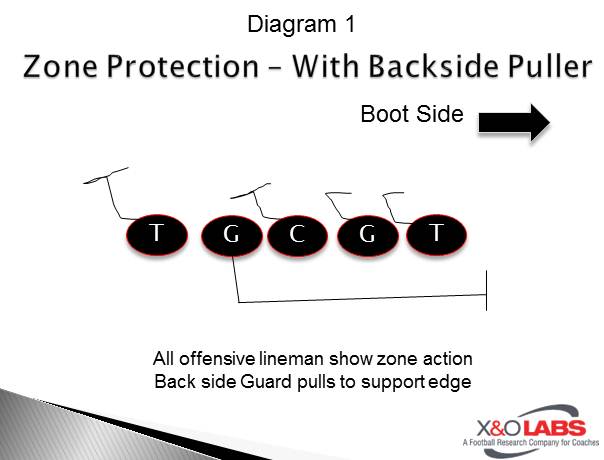 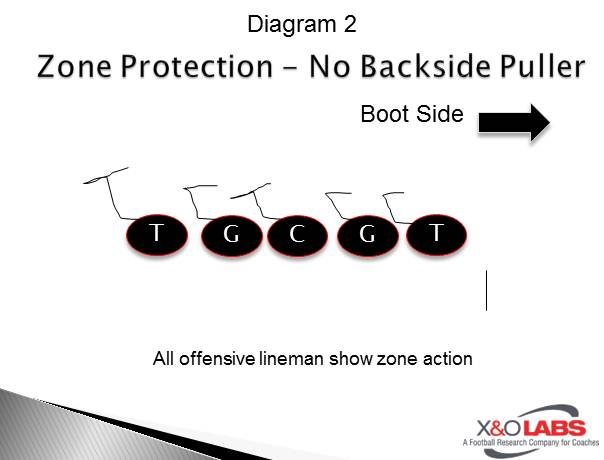 We were actually hoping for more of a discrepancy between these two concepts, but it seems coaches like it one way or the other- for various reasons which we will detail below.   Dave Schramm, the offensive coordinator at Fresno State University actually combines a zone and man protection scheme in his boot pass package.   Schramm will zone protect to the front side of the run, and man protect to the backside of the run (which is in turn the boot side).   In his protection, the Center will work towards the zone side, while the backside guard and tackle will block number one and number two respectively to the boot side (Diagram 3).  This prevents from any hard edge rusher up the field in the QB’s face, forcing and errant throw.  Schramm will also have the single back in his one-back schemes be responsible for both inside and outside linebacker (1-2 in count) after getting the mesh from the QB (Diagram 4).  One of Schramm’s major coaching points is to make sure the backside tackle MUST stay locked on a three technique or a 4i technique to prevent him from crossing his face (Diagram 5). 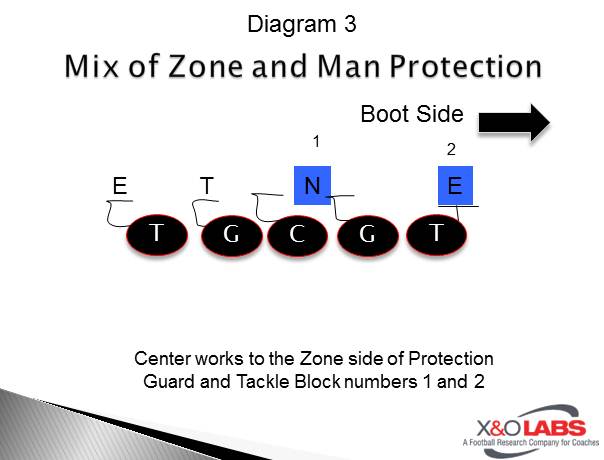 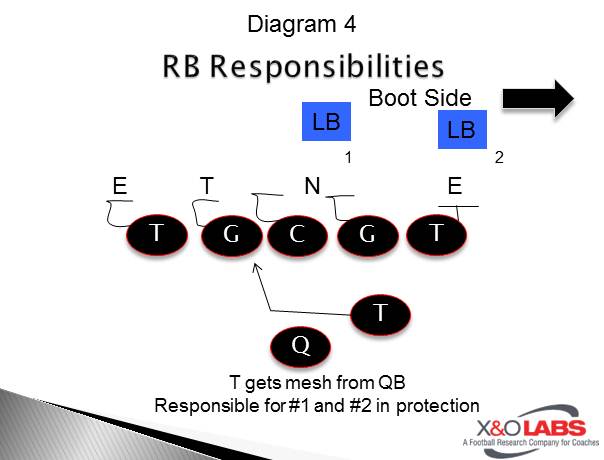 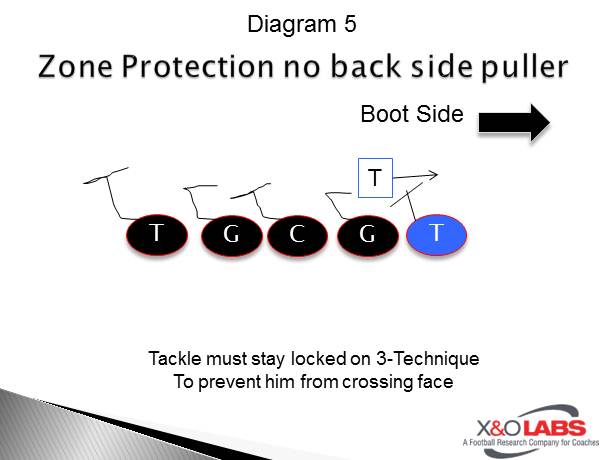 Coaches that swear by the full zone protection do so because the hard zone action causes a freeze in second level defenders such as linebackers or safeties, allowing intermediate routes to clear behind them. Dale Sprague, the offensive coordinator at Allegany High School (VA) teaches his offensive lineman to take a bucket step to block one gap away from the boot side. Sprague calls it a "hard reach" step while pulling the backside guard. "Our backside puller pulls flat until he crosses the center, at which time he gains depth to find the first defender outside the play side tackle and/or Tight End. There are some boots where we will pull the Center if need be, especially if he is uncovered."

Doug Taracuk, the offensive coordinator at Dublin Scioto High School (OH) felt that he just didn’t have the offensive lineman who can zone block, so he went more to a gap scheme protection up front- which he calls his "Gut" scheme. In his Power naked scheme, Taracuk will have the backside tackle block any B gap defender (to simulate Power) while the backside guard pulls. He tells his Tackle to stay on the double team and if there is no B gap first level defender, to sift hard, stay low and get to heels of defensive lineman- which he calls "Nebraska"- a term to remind his lineman not go up field. "We leave the End unblocked, and try to get the QB out and around," said Taracuk. "It screwed opponents reads- because they read tackles and get run reads."