“A Flop” Build-Ins to the Boot and Naked Game

With a tall, athletic quarterback and a recent Division 1 transfer at slot, building upon their boot game was a no-brainer last off-season at Stony Brook University (NY). A perennial CAA power, the Seawolves relied on its boot game for at least 4-5 reps per game for a 70% efficiency rating. Like most productive boot concepts, this one was effective both in the air- with a 72% completion percentage and on the ground where eight scrambles averaged 5.12 yards per carry. But it's how head coach Chuck Priore and offensive coordinator Chris Bache build in some of what they call "A Flop" tags to the boundary that made the concept productive. 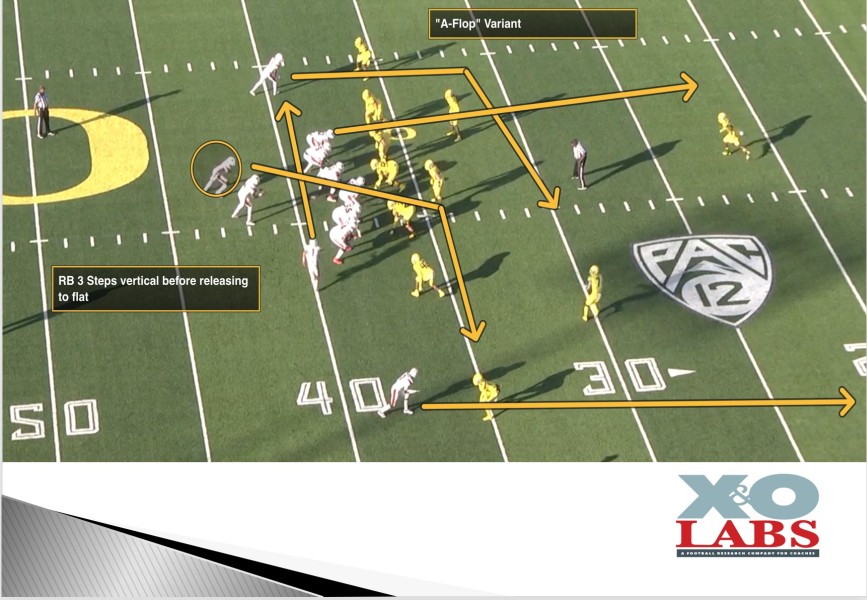 At Stony Brook, the boot game is part of the control pass menu which includes RPOs and Play-Action passes. But a lack of efficiency in the RPO game forced the offensive staff to rely on more of these boot principles this past season. While there are play-side and backside rules in the concepts, it's the various tags that the offensive staff devised that helped in its productivity. In all, the staff will build in 3-4 boot variants to the field and 1-2 variants to the boundary. Clearly, this is all built off how defenses are playing formations and personnel.

Stony Brook will utilize these boot concepts from Under, Pistol, and sidecar alignments. Clearly, in under alignments, the play fake is a bit more effective because the quarterback can stretch the ball. In Pistol alignments, he's asked to generate a quick flash fake before working his depth opposite. In gun alignments, the mesh is the same as mid-zone footwork. The quarterback opens at a 45-degree angle, sells the mesh fake, disengages, and then gets his eyes right on the unblocked, C gap defender. 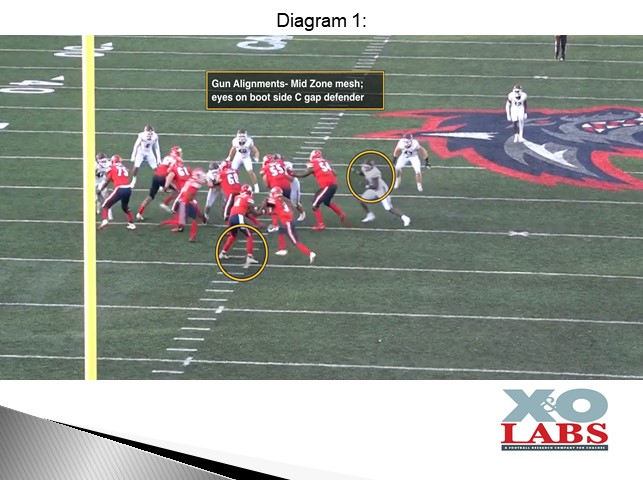 The offensive line is executing off its base mid-zone rules intending to get second-level defenders to move horizontally. According to wide receiver coach Caleb Haynes, Stony Brook puts a premium on that play fake because so much of its boot game is built off jet motion. “We have to sell it as a run play,” Coach Haynes said. “Many teams don’t run a ton of boot with jet motion because inside linebackers can work over the top with that motion." 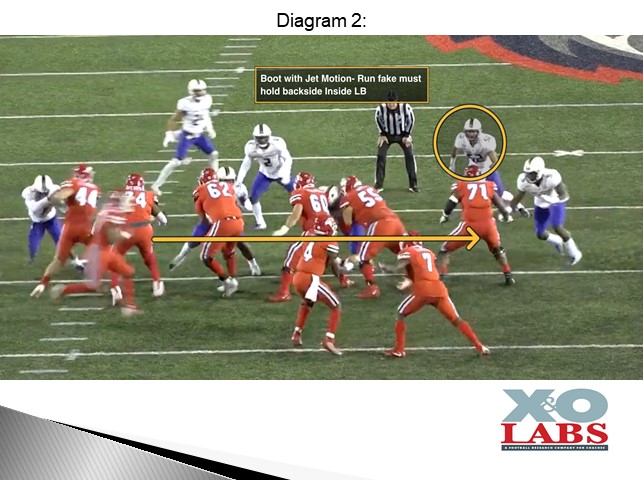 Before delving into the boot side route concepts, it’s important to note how Stony Brook formats the backside of the concept- or where the run action occurs. Below are the following tags for backside receivers:

Ground zero for Stony Brook’s naked game lies in the single receiver menu, both to the field and to the boundary. While the comeback is the most efficient route in the Seawolves naked menu, they have transitioned into other concepts such as the ones below:

Reduction Smash- number one wide receiver on out route, number two receiver on a flag route.

The one-on-one coverage beater against quarters structures seems to be the comeback by number one. But to get the correct spacing needed an emphasis is placed on the X stemming inside against the corner. 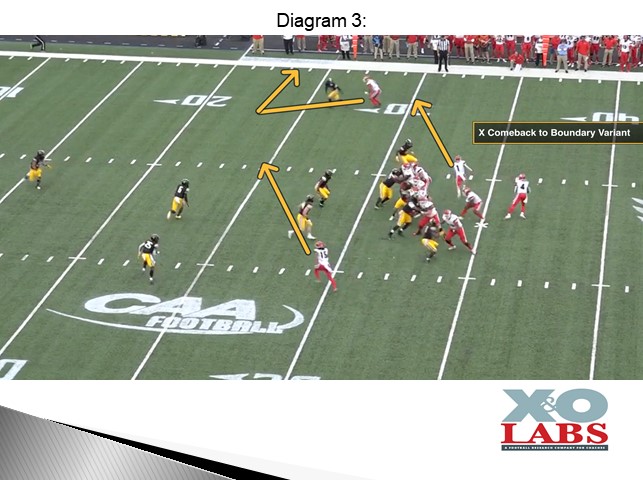 The quarterback executes a high/low read from the comeback down to the flat. “We talk about if the comeback is hairy, let’s dump it in the flat right now," said Coach Haynes. "For us, it needs to be a 10 out of 10 completion throw to take the comeback.”

The field comeback is also a staple in the Seawolves naked package menu, providing the quarterback can throw it. It’s a 14-16 yard comeback but the X needs to work on splitting the hash and sideline to get the necessary leverage to run it. 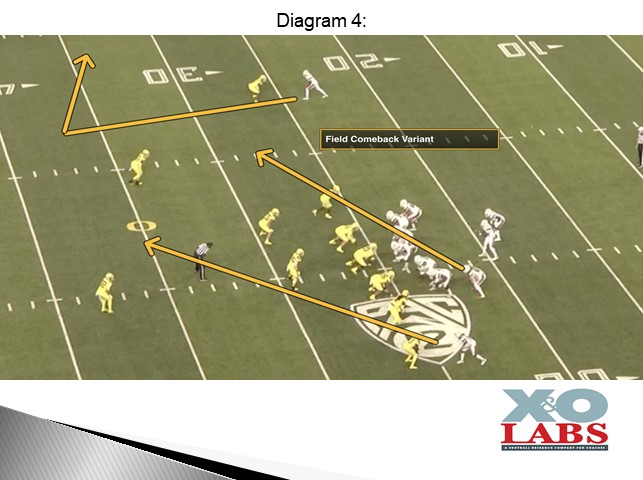 Most recently, they’ve gone to using more whip variants for the single receiver to the field. It was extremely effective to generate one on one’s against field pressure tendencies. The X is asked to sell a hard inside release for five yards and then pivot back out off the overhang. 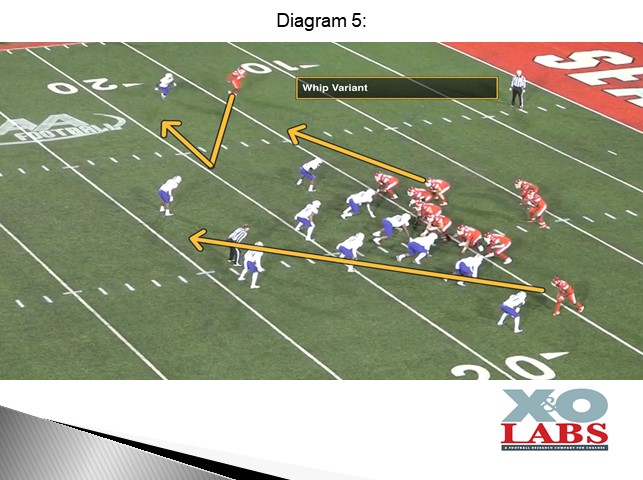 Finally, the high angle corner route can be another option in the Naked concept. Here the receiver cuts his split down to run the corner route. He gets to where he would be on a mandatory release, but now he’s a live option. The quarterback still executes a high low read from the corner route to the flat element to the drag. If neither is open, he needs to run. 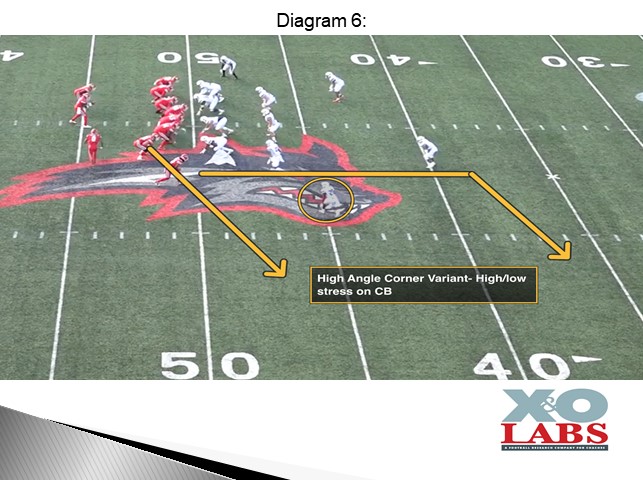