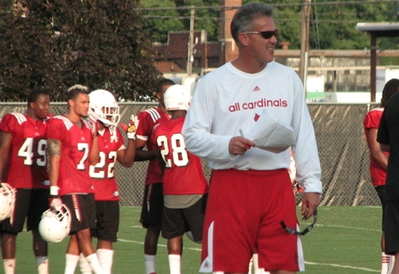 Most of the spread coaches that we spoke with stress the value of patience.  They want to be patient with their play calling, choosing to methodically march down the field blocks of yards at a time.  They want their quarterback to be patient with his reads – quickly diagnosing coverage before peppering defensive secondary’s with intermediate throws.  They even want their running back to be patient for gap displacement when running those zone read schemes synonymous with spread offenses.

But, often times patience can crumble – coming in the form of a speed rusher off the edge or a defensive tackle looping around for contain on zone pressures.  While offensive coordinators teach patience, defensive coordinators demand quickness – sending as many rushers to the quarterback as possible without compromising coverage.  Eventually, the offense needs to get plays off in a hurry – and in the face of the blitz.  We’ve surveyed the coaching industry to provide you a report on how to be effective in the eye of the storm, when that zone pressure comes.

Case 1: Identifying Zone Pressures When covering the topic of zone pressures, there is one common denominator amongst all defensive coaches we speak with.  They all tell us the first thing they teach is to "keep the shell" and disguise rotation.  What this means, is that pre-snap the defensive secondary should always resemble some form of a two-safety defense.  Eventually, one of those safeties will need to get to his landmark and coverage responsibility by the time the ball is snapped.  The question is when.  Good coordinators teach those safeties to disguise as much as possible – often dropping a split second before the ball is snapped.

Before we address what we discovered as some of the top defensive indicators to tip off a zone pressure, we went the extra mile for you, offensive coaches, in order to help you better disguise your snap count.  If you’re a shotgun team, the most frequent indicators seem to be some sort of hand or leg movement – such as crossing or clapping your hands so the center can see it or lifting or moving a leg (similar to the classic John Elway move).  If you’re more of an under center quaterback, we’ve found many teams will start their movement when your head comes back to the middle of the formation after looking right and left or the drop of your head immediately before the snap is delivered.

We’ve found that defenses have their "dead giveaways" as well before they start to rotate into their fire zone coverage.  While the majority of offensive coaches will key one of the deep safeties to see who drops pre-snap (54.5 percent of our coaches say that’s the first thing they look for), we’ve found there are a few other indicators that hint at a zone pressure coming your way:

We were able to spend time visiting with Shawn Watson, the offensive coordinator at Nebraska, who really simplified his methodology in how he prepares to attack zone pressures.  "Really, there will only be three types of pressures you will see," says Watson.  "You have external (outside) field pressures, external boundary pressures, and finally internal (inside) pressures.  Once we identify those it’s easy to attack them.  Even at our level, rarely is there a balanced pressure team that is effective at all three of those types.  They believe in one thing or another – they won’t do all.  I see a ton of field pressure teams for the most part – where they will overload the field and bring pressure."