Our base run game out of the shotgun consists of more than the following three plays, but we start with them. Each play is a complimentary play to the others. They look the same, have jet motion with them and attack multiple areas of the defense on each play. We can run all our shotgun plays from under center also. We have some subtle variations included in this report to either help break defensive keys, slow down the defensive flow, or provide better blocking angles for our offensive linemen. In 2018, we rushed for over 3,000 yards. We run the ball 85% to 90% of the time. Therefore, we are faced with 8 and 9 and sometimes 10-man boxes each week and we still find a way to run the rock.

The jet sweep is the first play that we install every year. Nearly everything we do offensively is predicated on jet motion. The jet is our best perimeter play and running it out of the shotgun has allowed us to evolve our traditional Wing T into our Spread Gun Wing T. We ask our offensive linemen to make a realistic block by enabling him to drive his defender outside if that’s the way he wants to go. This is a read attack jet sweep reacting to the blocks as they occur.

Over time, we have observed defenses that react to our jet motion in a variety of ways. They will slant to the jet motion, blitz to the jet motion, roll the secondary to the jet motion or any combination thereof. Sometimes defenses overreact and sometimes they under-react but our goal is to keep them guessing and make them pay for whatever defense they deploy. The strength and success of our jet sweep is because it exists in a series of other plays that help each other succeed. The Jet series plays look very similar to one another while being quite different. When we add some variations to the blocking and backfield schemes our offense becomes a nightmare to prepare for.

QB will snap the ball when the JET back is in the backside B gap. The QB will mesh with the jet back and carry out his QB Isolation fake. The ball carrier (Jet Back) will follow the block of his FB. The offensive line and play side wingback all take a 45-degree fire/reach step and try to gain outside leverage. If they cannot get outside leverage, then block your man outside as fast and hard as possible. The FB and Jet Back will read the blocks and cut up inside or stay wide and outside. We read attack the #2 defender. The fullback (gun back) is our lead blocker and he must make the correct read on the block our TE or OT make on the #2 defender for his route to block the #3 defender. We do not block anyone from the play side A gap back. The Center, BSG and BST simply cut off backside flow at the 2nd and 3rd level.

X: Stalk block the #1 defender or run off if tagged.

Y: Cut off backside flow at the second or third level.

RH: Block the #2 defender. Try to gain outside leverage but if you cannot then block him outside and we will cut up inside of your block.

LH: Fast jet motion receiving the handoff in the play side A gap. Get to the edge as fast as possible reading the block on the #2 defender and following your FB.

FB: If offset alignments you are the lead blocker on the jet sweep. FB will read our block on the #2 defender to determine if he leads the play inside or outside that block.

QB: Snap the ball when the jet back is in the backside B gap. Meshing with the jet back you will make the hand off in the play side, A gap then continues with a great QB Wham/Isolation fake.

BST: Cut off backside flow at the second or third level. 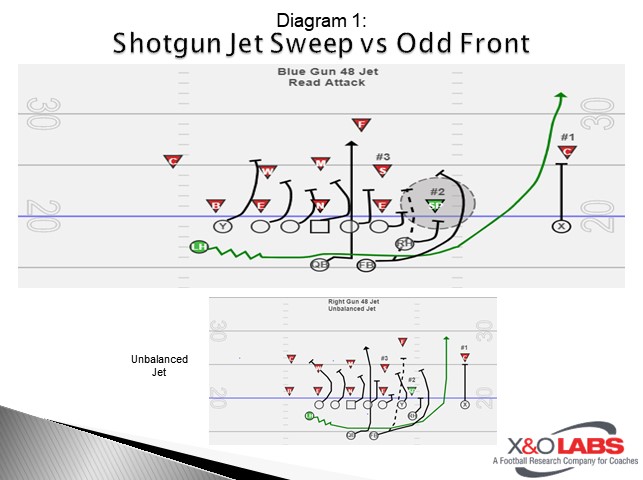 Editor’s Note: Coach Sorber has provided a clip by clip narration of this concept below:

Clip1: Unbalanced jet into the boundary. We outnumber the defense on both flanks. Great reach block on the #2 defender. We have such good numbers our FB just has to clean up as he leads the play.