Using the Twirl Series to Supplement the Single Wing Offense

I have previously detailed the basics of our overbalanced offense in the report “Adapting Single Wing Principles to Ignite Your Run Game.” One of the series not detailed in the report that we have used with great success is our Twirl Series. The Twirl Series is where our HB takes the snap and completes a full 360° spin while meshing with the QB and WB away from the line of scrimmage. 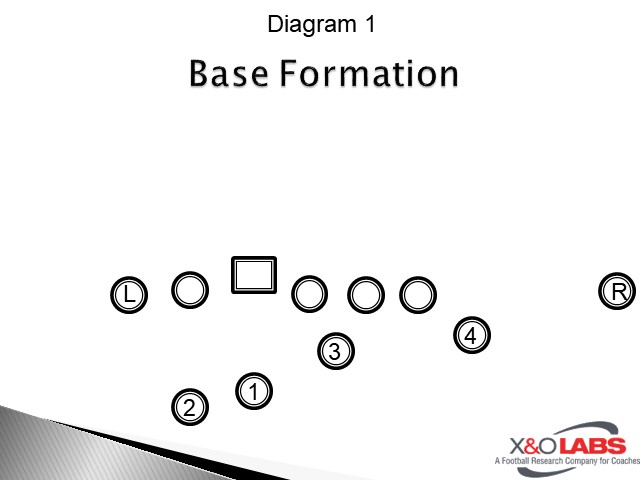 We feel like using the Twirl Series is like a pitcher changing speeds. While we are executing the same running plays as our base single wing set: Power, Sweep Strong, Sweep Weak, Wedge, the timing of the plays is different and usually causes the defense to hesitate. We feel this hesitation will slow the defense down so we can continue to run our base series. We have preferred to run this series to spark our offense when our base series is not as effective as we would like. 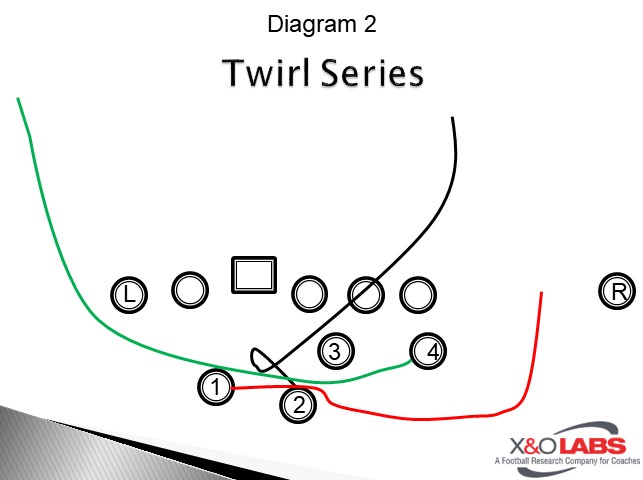 If we feel the defense is hesitant when we run the Twirl Series, we will run Power or Sweep Strong. When the defense reacts to stop these plays, we will counter with Sweep Weak and Wedge. We also have a Twirl Pass that we can run to exploit teams who creep up to stop the run and Twirl Screen to run vs. teams that try to get upfield and create havoc.

We run this series with our base personnel, but I feel that if a team had a plethora of RBs that this could be a great “wildcat” series since you have RBs attacking the middle and both flanks of the defense simultaneously. This deception and the defense’s unfamiliarity with the series since we feel that there is no way the opponent can simulate it in practice, allows us to overcome the loss of a strongside blocker, who is now engaged in the mesh.

One of the other advantages of this series is that all our plays look very, very similar. With the HB, QB, and WB running the same path every time, the defense does not know what the play is until they can find the football. This is much harder than it sounds. With the HB spinning and the QB and WB meshing with him, a lot of movement is going on in the backfield and it makes it hard for eyes to focus and find the football. We have found that even the most disciplined teams in terms of reading keys get caught staring in the backfield trying to find the ball instead of reading their keys. It is not uncommon for players at the first, second, and even third levels to slow down and try to find the ball, take themselves out of the play by chasing someone who doesn’t have the football or attempt to tackle someone who doesn’t have the ball. Besides making it much easier on us when the defender takes himself out of the play, it puts doubt in the minds of the defenders, and we feel it slows him down for the rest of the game.

Though the Twirl Series seems very complex we have found that the basic mesh point can be installed in a small amount of time. The clip below is from our Freshman team in June 2014, when we first started installing the Twirl Series. We initially installed it with them before we did with the varsity. This allowed us to work some kinks out. They have had approximately 15 minutes of install time. Before this clip, there were a few cases of players bumping into each other, but as you can see after a short amount of time, they have the basics down. The mesh is a little slow and mechanical, but overall it gets the job done.

Editor’s Note: Coach Woolley has provided narration for each clip below:

Clip #1- HB is going to keep the ball. Even with no offensive line, it is tough to see who has the ball as all 3 RBs carry out fakes. Notice how HB double skins it as he is coming into the line of scrimmage. This creates a lot of deception.

This clip is important for another reason: it allows you to get a feel of the defensive perspective. It is hard to figure out who has the ball when you only watch it once. It is important to note that in this clip there is not an offensive line in the way to further obscure the vision of the defense. Adding the offensive line combined with the ball carriers hiding the ball from the defense through “double skinning” or placement on hip make it extremely hard for a defense to find out who has the ball.