This particular case will focus on the most advantageous formation structures offenses can present when utilizing the veer and midline concepts.  While we understand that coaches will predominantly use what they are accustomed to, we did find that certain formations would place more stress on defenses than others.  So, after distributing our surveys and conducting our research, we found coaches will use the following 18 formations most frequently in the option game

Before we detail the specific formations there are some general principles that option coaches adhere to when deciphering which of their option schemes are most beneficial.  Some of the more general responses we received are centered on the following:

Of course, there were some responses that centered around personnel matchups as well and we discussed most of them in Case Two last week.  Paul Murphy is one of those coaches who feel that his ball carrier is the impetus behind which play to run.  “Whether we use the veer or midline scheme for us has more to do with the personnel match-ups,” said Murphy.  “We like running the midline if we have a fullback type that can find the seam since we will triple team the NG vs. a 3 man front and we will trap an even man front that plays a 3 and 1 tech.”

One of the more common methods of deciphering to run the veer or midline scheme is identifying the outside inverts; it’s a method we learned while talking to Jerry Campbell (http://stores.jerrycampbellfootball.com).  In it’s simplest sense, if there are two inverts (or eight man front) it makes sense to run towards the Tight End because of a numbers advantage (Diagram 1).  According to Campbell, “any offense is most flexible and at its toughest point when it has two running backs, two wide receivers and a tight end.”  According to Campbell, he would have his quarterbacks make his choices based on the following: 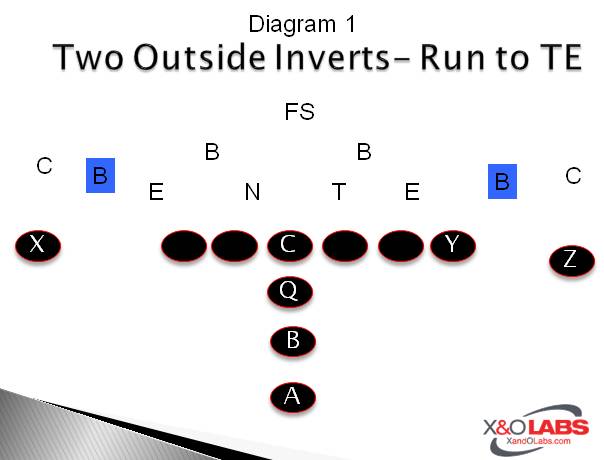 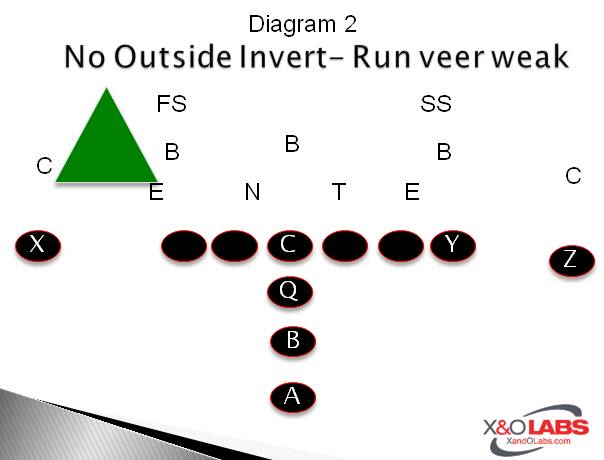 Mike Judge, the fullbacks coach at the Naval Academy, told us he will go into each game with an average of nine formations, but most times he’ll only use two or three.  “We may run three formations all game if we’re successful,” said Judge.  “If we are getting what we want out of 2x2, then we don’t start tinkering with it.  “We get into different sets because of what the defense is doing.  If they are going to match personnel, like an 8-man front team taking Corners over, that’s why we get into different sets.”

Judge expounded upon his no-huddle system which allows the QB to put them in the best play call possible.  “Our QB knows that when we get certain looks, these are the three plays I want to check to,” said Judge.  “We may only have one check to each look.  We don’t give him a ton of things.  We’ll say if you get a three-technique with a two backer set we want to run midline.  If we get a shade five nine to the three-man surface then we want to run inside veer.   Ninety-nine percent of the time we know what we’re going to get.  Teams are not going to play seven different defenses against us.  Once we have an idea of how they are going to line up, we’ll say ‘when we go Over (unbalanced), these are the two plays we want.  Here’s one strong and here’s one weak depending on how they put the front.’”

So, we asked our readers which of the following formations do they feel are most beneficial when running the option game, most specifically, the inside veer.  We’ve found that 61.2 percent of coaches prefer to use the traditional flexbone formation more than any other formation.  Split backs and “I” formations were second with 10 percent. Since it is the most popular formation in the option game, we will start there. 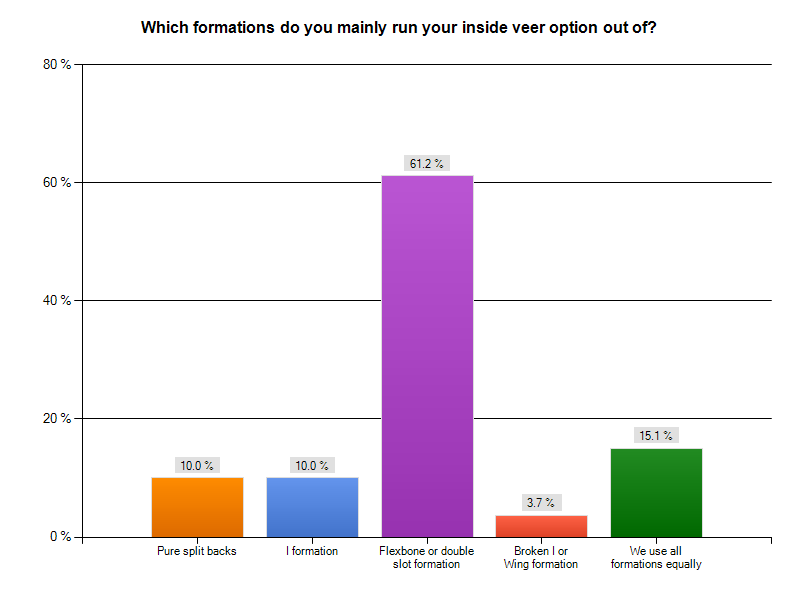