Regardless of what offensive system you run, you must admit you’re curious about the flexbone. How can this offense produce the top rushing numbers year in and year out despite an often disparity at talent? Sure, the basis of this offense is to run the football, but we’re talking about yards per carry here. Specifically, 5.7 yards per carry over the last four seasons as it pertains to the Naval Academy. In fact, of all the major rushing categories (yards per game, yards per carry, yards per season) the Midshipmen have only been out of the top five two times in each of those categories since 2013.

We were curious too. So, we took what are believed to be the three cornerstone blocks of the flexbone offense, the front side combination, backside scoop and veer release, and organized an exclusive first person tutorial with offensive line coach Ashley Ingram to learn how he taught these blocks. We spent a day with offensive line Coach Ingram this spring to research how he teaches these three blocks. As hard as it was to fight the urge to tour Annapolis in the spring time, we hunkered down in the backroom facilities at Navy to study how he’s able to get his offensive line to perform at such a high-level season in and season out.

You don't need to run the flexbone offense to learn from this report. If you run outside zone, you scoop on the backside. If you run gap schemes, you combo on the front side. And if your offensive menu has any option element in it, you’ll need to teach the veer release to evade the read key. At its bare bones, this report is about how to teach offensive linemen to get off the ball and play with a physicality that is unmatched. Its what Navy does. 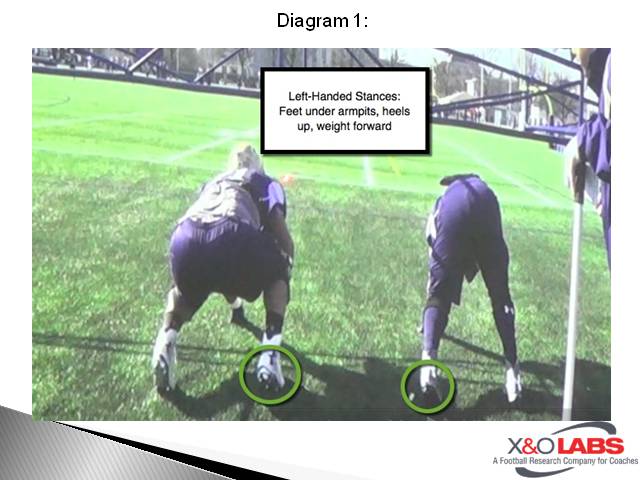 When you watch Navy’s, offensive line get off the ball, and boy do they get off the ball, you will notice the almost sprinter like stance used by the front five. Their feet are directly under their armpits with some air under their heels. The front hand is a good deal in front of them. Although Coach Ingram down played how important weight distribution is by just talking about having the weight forward, he did emphasize how important it was to have depth off the football. “We push it to legally breaking the belt line of the center,” he says. “We only cheat on the ball if the defensive line plays back on us. We put our hand on the toe of the center. Our helmet will break the belt line.” In order to teach a three-foot split across the front, he’ll start each of his individual drills with a line splitter that you can see in the diagram below (Diagram 2). 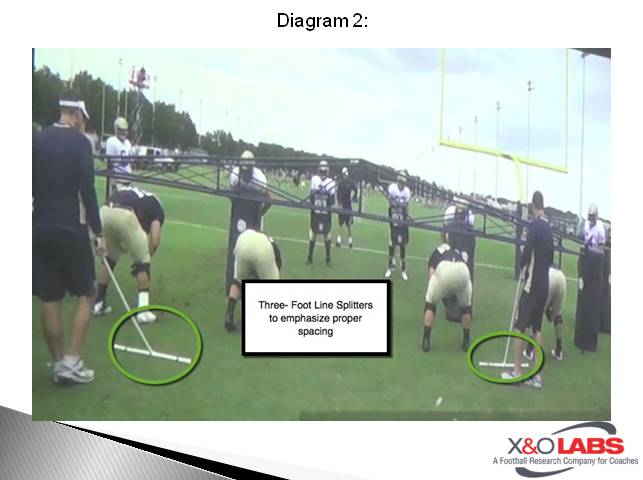 In order to execute the backside scoop block more efficiently, he teaches both a left hand and right hand stance. “Our left side linemen play with their right hand down with a right foot stagger,” he said. “Our right-side linemen play with their left hand down with an inside foot stagger. The outside foot should be a little more cleated than the inside foot. Our inside hand is down on both sides which helps with scooping because that’s the hardest thing in our world.”

Coaching Points on the Stance:

Coach Ingram provides his tutorial on how he teaches stance in the video below: