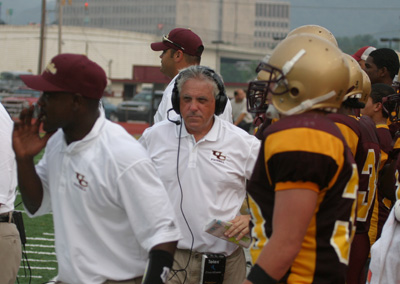 The premise is simple:

FORMATION:  UNBALANCED TRIPS or “OVER”  (Diagram 22) 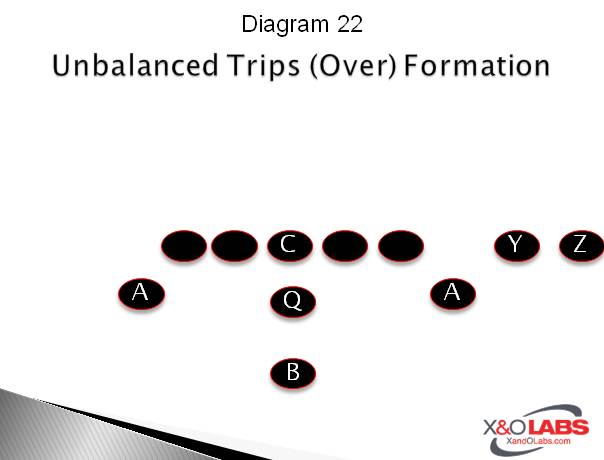 This formation has been a common formation among option disciples.  When conducting our research, we’ve found the following maxim uttered on numerous occasions, “an unbalanced formation forces a defense to become unbalanced” and that’s how it can be manipulated. While we found this formation particularly effective against Even fronts, it can be just as productive against Odd fronts as well.

“The University of Hawaii gave us an eight man front, so we went receivers over unbalanced into the boundary or the field and they match with a Corner.  So now there is one less guy to deal with out to the play side.  We went back to the weak side of the formation with our option game. Against 4-3 defensive teams we will go wide receiver over to the field and they will condense and play Cover Two to the field.  They will walk the Sam out and split the difference.  They didn’t add a person out there so now we have four blockers for three players.  We get on the back side Safety in a heartbeat.”- Mike Judge, Naval Academy

“The slot could become the dive back in what we call a  “Flip” alignment.  The TB becomes the pitch player.  If we are in trips formations against an eight-man front, it gets linebackers to bump with that motion.  It’s the same read with the same blocking.  If they don’t bump, we run triple the other way.”- Tony DeMeo, former head coach, University of Charleston.

“’Over’ calls for the WR on one side to align on the same side as the other WR. He is on the LOS and covered by the other WR making him ineligible but it does give us another perimeter blocker that some teams will not account for.”- Joe Bosley, Hereford HS (MD).